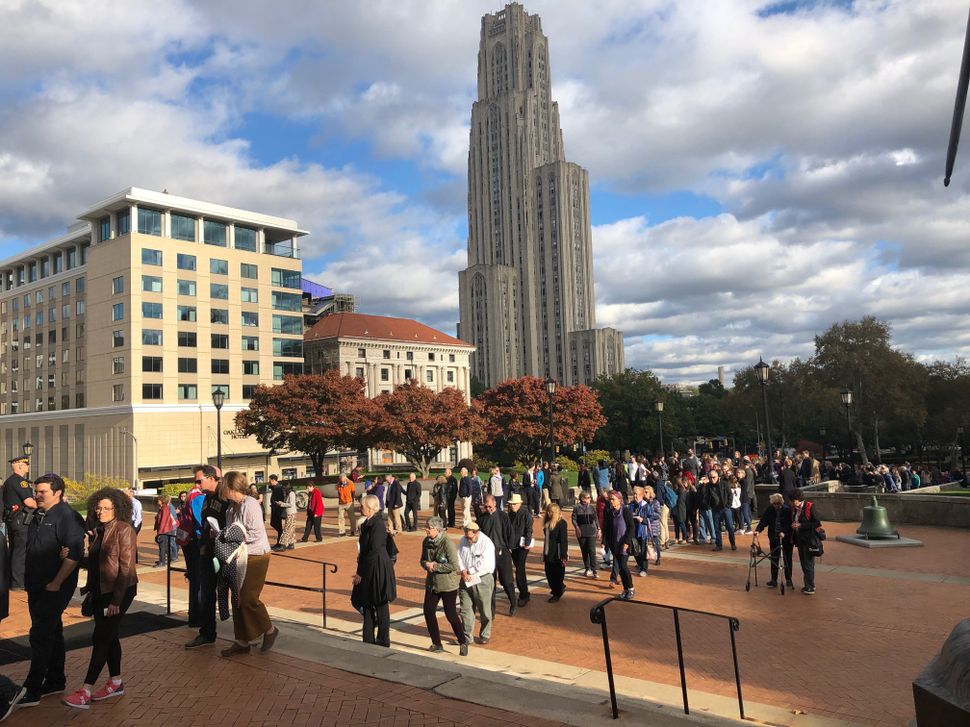 After a day of community service, Torah study and community gathering, Pittsburgh residents say they are closing a chapter in their healing after last year’s deadly synagogue shooting.

Sunday was the one-year mark, a date loaded with significance. There was a long roster of activities and ceremonies that, amid tears and unanswered questions, enabled the community spread goodwill, remember the victims and repair the world.

October 27 saw days of rain give way to sun that met volunteers on their way to blood drives, cemetery cleanups and craft-making activities.

Rabbis and other faith leaders guided those searching for answers using sacred texts and conversation.

And at the end of the day, hundreds of people, family members of the deceased, witnesses, congregants, Squirrel Hill residents, Pittsburghers, Pennsylvanians, Americans and citizens of the world gathered in the auditorium at the Soldiers and Sailors Memorial to pray, cry and hope for change.

Attendees scattered into the chilly evening in Pittsburgh, heading home to sort through the gratitude, the grief, the anger, the numbness and the hope that has persisted despite all odds.

The Forward’s reporters covered the events of the day, and you can read the dispatches from across the city below.

Exactly a year to the day after the brutal slaying of 11 Jews in the Tree of Life*Or L’Simcha synagogue building, the pall hanging over the densely Jewish Squirrel Hill neighborhood had intensified.

“They haven’t gotten past the mourning stage yet,” Mayor Bill Peduto told the Forward. “And for a lot of the rest of the city, the trauma is still very, very real.”

The Jewish community joined their neighbors on Sunday to mark the close of the horrific first year. Local organizations coordinated a day of Torah study and community service events for survivors, friends and neighbors to comfort one another and honor the victims.

Volunteers started the day by setting out preparing meals, cleaning up Jewish cemeteries and gathering supplies to send to refugee children at dozens of locations across the city. In the afternoon, congregation Rodef Shalom in the city’s Oakland neighborhood held Torah readings, along with sermons and discussions on healing.

The day culminated in a public memorial service where local leaders and community members honored the people who lost their lives with speeches, music, prayer and a video at the city’s Soldiers and Sailors Hall, the same auditorium where the city held a vigil for the victims the day after the attack last year.

Amidst the overgrown graves built into gentle hill at Shaare Torah cemetery in Pittsburgh’s South Hills, Suzan Hauptman is surprised to spot a name she recognizes. “It’s one of my grandfather’s wives,” she told the Forward.

Hauptman, a Squirrel Hill native, explains that her grandfather was widowed two or three times in his life, and she had never known where this wife was buried. She is here clearing thorns, leaves and other debris from the plots, in honor of the 11 victims in last year’s attack.

Hauptman points to another location, close to the cemetery’s gate. “My parents are buried over there, and my grandparents are in another section.”

In recent years, Hauptman has been researching the history of her family, who belonged to the Shaare Torah synagogue in Squirrel Hill. She is here at the congregation’s cemetery today — which is about 20 miles southwest of the shul — with her husband, her son and his girlfriend. Hauptman says the horrors of what happened a year ago showed her how important it is not to take anyone, living or dead, for granted. She especially wanted to find a way to help those who have already passed on.

At Jewish Family And Community Services of Pittsburgh, volunteers are participating in three activities: packing therapy backpacks for unaccompanied children brought to Pittsburgh from the southern border, making blankets for refugees resettled in Pittsburgh and creating felt hearts to give to refugee families.

Rachel Butler of Greenfield took a shuttle to JFCS to make hearts for refugee families. She said today is a “hard day” for people in the area, and she’s hoping to spread some “peace and comfort” through her volunteer work today.

The alleged shooter, Robert Bowers, wrote anti-Semitic and anti-immigrant sentiments online before attacking three congregations in the Tree of Life synagogue building last October. He targeted one of the congregations in the building, Dor Hadash, for its work with HIAS, a Jewish nonprofit that serves refugees, and told law enforcement after his arrest he thought Jews were committing genocide against his “people.”

“Given what we think was the motivation for the shooting last year, I really felt compelled to do something to support refugee families coming to Pittsburgh and the general area,” Butler said. “There are little things that we can do every single day to make the world a better place.”

“Music is therapeutic; music is life,” said Darryl Cann, a Jazz clarinetist who plays at the market. “Music is like breathing air. That’s how real it is.”

Cann plays everything from the Great American Songbook to the Itsy Bitsy Spider, and today, he plays klezmer, even though he said he didn’t realize today was the year-mark of the synagogue shooting that killed 11 last October.

Upon finding out about today’s importance to the community, he insists on playing Hava Nagila.

“I pray to God that he protects us, and thank goodness he gives us music, which soothes our soul,” he said. “I hope just by listening to my music, it’s very healing.”

At the Jewish Community Center of Greater Pittsburgh, a woman in a blue t-shirt announces that the wait to give blood has reached two hours. She encourages people to grab lunch and come back.

Luckily, Evie Rosen and her mom, Sheri, got here early. Evie’s religious school at Temple Sinai had a 10:45 a.m. dismissal today so everyone could participate in the community events, like the blood drive. They normally get out at noon. Tomorrow is Evie’s 11th birthday.

“Even after something really bad and sad happens, people can still be strong,” she said.

Sheri said she felt like it was important to be out in the community today to show their support.

“Yesterday it was rainy and dreary and depressing, and this morning, when we were driving to Temple Sinai for their religious school, the sun was shining and bright, and it kind of made me feel like that’s what this community has become,” said Sheri. “From this darkness we have pulled together so much light.”

Rabbis from Pittsburgh and across the nation convened at Temple Rodef Shalom for an afternoon of Torah study and midrash to remember the 11 Jews killed last year.

Rodef Shalom, the oldest synagogue in Western Pennsylvania, opened its doors to the public on Sunday to participate in the Jewish tradition of engaging with life’s most difficult moments through questioning and discussing Scripture. Each rabbi took over a room for the day’s reading and lesson, while congregants and guests were free to choose which sessions to attend.

Rabba Yaffa Epstein, of the Wexner Foundation, held her talk “Shall Not The Judge of All The Earth Deal Justly?” in the main sanctuary.

In the reading, Abraham wins an argument with God, convincing him to spare the righteous from the destruction of Sodom and Gomorrah. Why would God let Abraham win a debate, Epstein asked the crowd.

Because He sees Abraham as a sort of equal partner in God’s divine plan, said one woman in the back: Abraham must be the father of nations, so God gives him a say.

Because God is preparing Abraham for something bigger, said a young man.

Inside the Soldiers and Sailors Memorial Hall and Museum in Pittsburgh’s Oakland neighborhood, a melancholic piano melody plays and people wearing “Stronger Together” T-shirts and kippot greet each other with hugs, pats on the back and hearty handshakes. A slideshow of photos from the day’s events plays on two screens flanking the stage, on which sits a table with 11 white candles.

Outside the building, the line to enter flows nearly onto the street. In about a half hour, a memorial service will begin, which will include a video honoring the victims, prayers for healing and for the souls of the deceased, a performance by a string ensemble and readings by Pennsylvania Governor Tom Wolf and Mayor Bill Peduto, among others.

See a video broadcast of the community gathering here.

The community commemoration finished a few moments ago. Each of the three congregations had a representative speak, and Rabbi Jonathan Perlman of New Light received a standing ovation for his call for action on gun control by the state and federal governments. Perlman also criticized the Justice Department for seeking a trial for the alleged shooter, saying prosecutors were looking for a “show.”

The audience was audibly moved during the video honoring victims, which included testimonials by family members and photos and videos.

Both Perlman and Rabbi Jeffrey Myers called on the media to make positive news coverage more visible, and to be sensitive to the needs of those affected by the shooting.