Schools: Minorities Love Halloween Because It Includes Us. Stop Cancelling It! 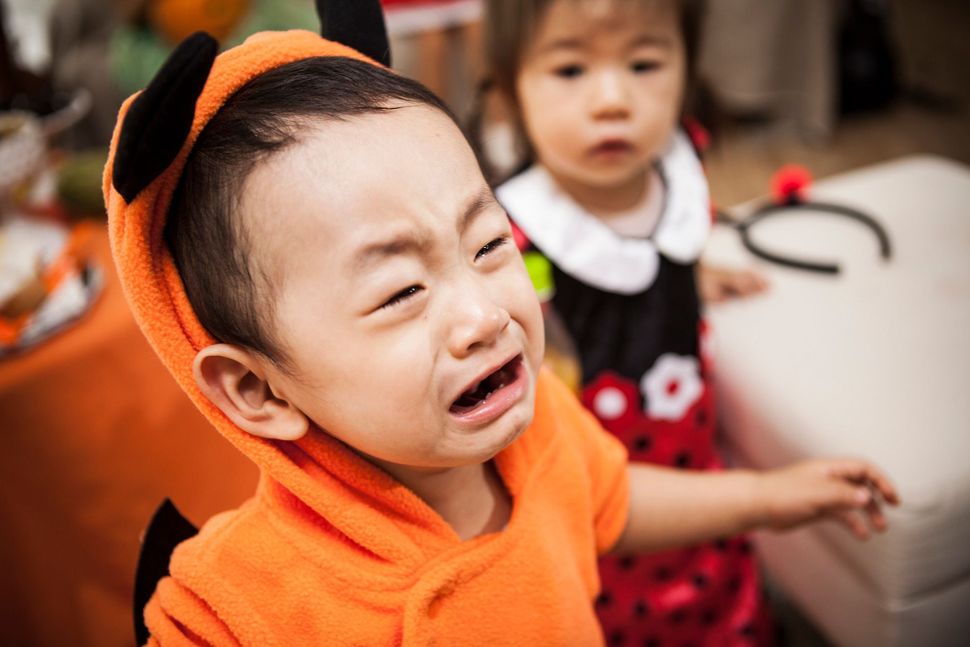 A child crying on Halloween Image by kokouu/iStock

Public schools from San Francisco to Philadelphia are cancelling their Halloween celebrations, citing concerns that because not everyone celebrates the fall festival, some students might feel excluded.

“As part of our school and district-wide commitment to equity, we are focused on building community and creating inclusive, welcoming environments for all,” said the Evanston/Skokie, Illinois school district in a statement explaining why some schools have pulled the plug on festivities this year for the first time.

Inclusive? As a Jewish kid with first-generation American parents, growing up in an overwhelmingly Christian community, Halloween was the one holiday I could celebrate.

Back in the 1960s, no administrators seemed concerned about political correctness when our Northbrook, Illinois school choir sang deeply religious Christmas carols (I learned to mouth half the words to “O Come All Ye Faithful.”) There was no nod to America’s melting pot when teachers held Easter Egg hunts or scheduled exams on Yom Kippur. And certainly, a rabbi was never on the podium at graduation to deliver the invocation.

Now, in the interest of inclusivity, school districts nationwide have decided to suspend the one holiday that encourages the consumption of unlimited amounts of candy. But when I was a kid, Halloween was the one time when our house — with its carved pumpkins – looked like everyone else’s. In December, when twinkling lights adorned our block, we were stuck with a sad paper menorah taped to the front door.

As Halloween bans have gained momentum, some districts are offering alternative fall festivals instead. For example, since 2015, Walpole, Massachusetts has swapped Halloween for “Black and Orange Day.” Two years ago, Waukesha, Wisconsin embraced “Hat Day” and Beaverton, Oregon, has “Crazy Sock Day.” (Clearly, the adult who came up with that one must have been traumatized as a child by too much candy corn.)

“Holidays in general are becoming more difficult to manage in public schools, because we have such a diverse population,” said David Wick, president of the National Association of Elementary School Principals.

Numbers are hard to come by since no education organization seems to track the trend. But the first reference to a school dropping Halloween occurred in 1996, when some parents in Johnston, Iowa, objected to the wizards and witchcraft – the same reason why many evangelical Christians have vetoed “Harry Potter.”

Since then, a review of news archives finds at least a dozen schools have done the same, garnering praise from some parents and sparking outrage from others who want their offspring to share the same cherished rituals that they enjoyed.

The holiday started as a Celtic festival, called Samhain, celebrated more than 2,000 years ago by people who believed that the dead could walk among the living at this time. Christians later recast it as All Hallow’s Eve, a time to remember the dear departed and a prelude to All Saint’s Day on Nov. 1.

Halloween’s religious roots would have been news to my very Jewish mother, who started planning our costumes weeks in advance. And when I became a parent, I followed the same path with my own two children.

Indeed, most Reform and many Conservative Jewish families view October 31 as a totally secular holiday, like Thanksgiving.

Rabbi Debra Newman Kamin of Am Yisrael in Northfield, IL hands out goodies and has always allowed her own three kids – now in their 20s – to go trick-or-treating, an activity they could share with with their less observant cousins.

“I loved that they could all do this together. You just can’t fight against mainstream culture all the time,” said Kamin, who is president of (but not speaking for) the Rabbinical Assembly, the membership organization for Conservative rabbis.

Yet some Jews, like evangelicals Christians, don’t celebrate Halloween.

The Orthodox say Jewish law prohibits participation because of its pagan and Christian beginnings, according to Alfred J. Kolach’s “The Second Jewish Book of Why.”

“A holiday’s origins do not simply disappear over time,” writes Kolach, which means Halloween is still be considered “gentile in nature and ultimately against Jewish law.”

And Ruth Adar, a Reform rabbi, discourages Jewish celebration of Halloween “because it does not match up with Jewish values,” she writes on her blog, “Coffee Shop Rabbi.” Why doesn’t it match up? “Judaism already has a costume holiday,” she explains. “Come Purim, I’ll dress up and get crazy.”

Schools’ anti-Halloween prohibitions, of course, are about more than religion. Some officials have twisted themselves into knots to justify their decisions, citing safety, food allergies and especially economic concerns for opting out.

Here’s a newsflash, administrators: Your students already know the difference between the “haves” and “have-nots” – by their backpacks, birthdays and who wears knock-off Nikes. If you really want to address economic disparities, consider the kids whose parents work two jobs and the classroom may be the only place where they get to dress up and have cupcakes.

But my winner for the most convoluted reason for axing the holiday goes to the Burlington, Vermont school district. The leadership team there worried that costumes make some students “uncomfortable by the notion that you change your identity” and “turn into someone else.”

Lenore Skenazy, president of the nonprofit We Grow and a long-time advocate for fostering independence in children, says that’s ridiculous.

“On Halloween, you can be a different species, an alien or a superhero. It is the ultimate in inclusion, but there’s always someone who can come up with a reason to clamp down on joy,” she said. She isn’t surprised that the grown-ups are over-thinking this “innocent and wholesome day, loved by 99%” of the population.

Whatever the motivation, Lily Belkin, a third-grader at Washington Elementary School in Evanston, is disappointed. She was looking forward to donning her witch costume – complete with pointy hat and broom – and accompanying her kindergarten “Little Buddy” in the parade this week. Then her school called the whole thing off.

“I really liked having it. Parents brought snacks to our class. We also made cards for each other,” she said. “It was just fun.”

Certainly educators today must wrestle with serious issues – from cyber-bullying to homelessness – but Halloween is not one of them. If you find the holiday objectionable, keep your child home or take them bowling.

Bonnie Miller Rubin is a former reporter for the Chicago Tribune.

Schools: Minorities Love Halloween Because It Includes Us. Stop Cancelling It!