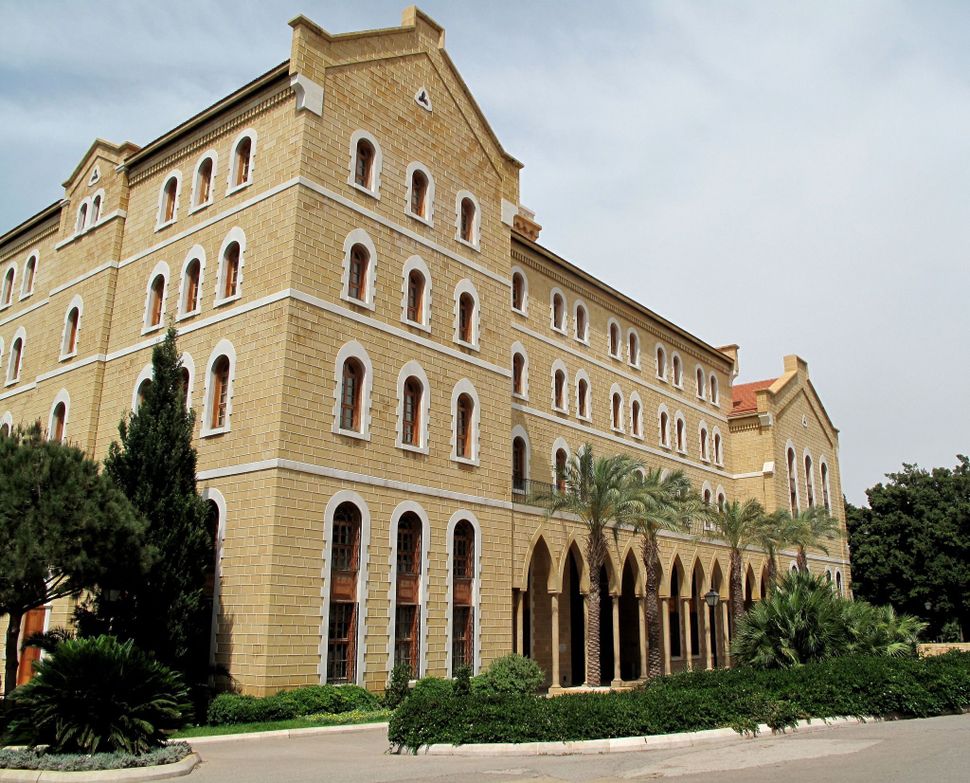 One of the best institutions of higher education in the Arab world is violating American law by not letting Israelis sign up for its online courses, according to a complaint filed Friday to the New York City Commission on Human Rights.

Israeli activist and attorney Yifa Segal said she was unable to sign up for a global health program with the American University of Beirut because the signup screen didn’t include Israel as a nationality option. She tried to enroll not because she is interested in global health, but because she knew she would likely be unsuccessful, and wanted to challenge the school on legal grounds.

Lebanon doesn’t recognize Israel and forbids its citizens from even speaking with Israelis, so it’s not surprising that AUB wouldn’t let Israelis take its classes. But while AUB’s campus is in Lebanon, it has an office in New York City. It is recognized by the New York state government and the regional university accreditation authority. The complaint accuses the university of violating New York City laws. Experts consulted by the Forward said the school might be violating state and federal laws as well.

“You can’t come in from China and offer a program to whites only,” said Professor Peter F. Lake, director of the Center for Excellence in Higher Education Law and Policy at Stetson University.

American University of Beirut did not respond to a request for comment.

“We have been investigating to find entities that are boycotting Israel, and to make an issue out of it,” said David Abrams, a pro-Israel legal activist and New York-based attorney who helped Segal file her complaint.

Segal is the director of the International Legal Forum, an organization that fights legal battles against the boycott, divestment and sanctions movement and other entities it sees as threats to Israel. Abrams has previously sued Airbnb for withdrawing listings in West Bank settlements and the city of Durham, North Carolina for passing a resolution prohibiting its police officers from training in Israel.

The state of New York and the federal Department of Education might withdraw financial support from the American University in Beirut if the school is discriminating, said Lake.

“They could potentially drive an entity out of business,” he said.

The university was founded in 1866 after being given a charter by New York state. It has consistently been ranked as one of the best universities in the Arab world by the global academic network QS. AUB degrees are endorsed by the New York State Board of Regents, and the school is accredited by the Middle States Commission on Higher Education, which reviews and approves universities in the Mid-Atlantic region on behalf of the Department of Education.

According to the complaint, Segal tried to contact the university multiple times to try to rectify her inability to enroll, but never received a response. It was only then that she and Abrams initiated the civil rights case.

Abrams compared her effort to how civil rights activists in the 1950s and ‘60s “would try to enroll a black child in a traditionally white school.”

Experts in education law consulted by the Forward said the ban on Israelis was discrimination.

“It may depend on their incorporation documents, but it would appear that if they’re doing business in New York, that New York and federal law both apply, and as a result, this seems to be discrimination based on national origin, and perhaps religion,” David Bloomfield, an education professor at Brooklyn College and the CUNY Graduate Center, told the Forward after the complaint was described to him.

Bloomfield and Lake each said that it was possible the problem could have been caused by a website bug accidentally excluding Israel from its list of country options. But if it that erasure were found to be purposeful, AUB could have a problem.

It doesn’t matter that it the complaint focused on online course rather than an in-person one, Lake said: “Federal law follows you in the digital world and the physical world.”

But both Bloomfield and Preston Green III, a professor of educational leadership and law at the University of Connecticut, said the case was made more complicated by the fact that Segal is not an American citizen or based in the United States.

Green added that it would also need to be determined whether the American University of Beirut is indeed an American university.

The complications would likely lead to a legal fight, but based on the endorsement from the Middle States Commission on Higher Education, “it would seem that U.S. rules apply,” Green said.

The experts consulted by the Forward all said that Segal likely had grounds to at least file a complaint with the federal Department of Education, if not sue the school directly in civil court, just as Harvard University was sued over claims their admissions process discriminated against Asian-Amerians. (A federal judge ruled in Harvard’s favor last month.)

Lake and Green said the most obvious issue for AUB was Title VI of the Civil Rights Act of 1964, which states that any entity that takes federal funds, including universities, may not discriminate on the basis of race, color or national origin.

Abrams told the Forward that as a civil rights attorney, he concluded that the New York City Commission on Human Rights, not a courtroom or the federal Department of Education, was the proper venue for his complaint. The commission can investigate alleged discrimination, which could lead to an administrative hearing and possible civil damages.

“Our priority is to fight against discrimination against Israel, it’s not to damage the American University of Beirut,” he said. “It’s to get them into compliance with the law. That’s where we’re coming from. Could this cause some problems? Possibly. But we’re not trying to harm them. We’re trying to get them to treat Israelis the same as everyone else.”

“If it were me, I would raise it with the Office of Civil Rights” at the Department of Education, he said. “I don’t think you’d get somebody in trouble. I think it helps to get the clarification.”

The head of the Office of Civil Rights is Kenneth Marcus, a former pro-Israel legal activist who has pushed the department to recognize some forms of anti-Israel activism as anti-Semitic discrimination.

“Those of us in higher education in the United States are keenly aware of the fact that there’s been an surge of anti-Semitism in the United States and globally,” Lake said. He added that when the Forward told him about the case, “I got goosebumps and my ears picked up. It really makes me nervous.”