Torah Scrolls Were Desecrated In L.A., But It Might Not Be A Hate Crime 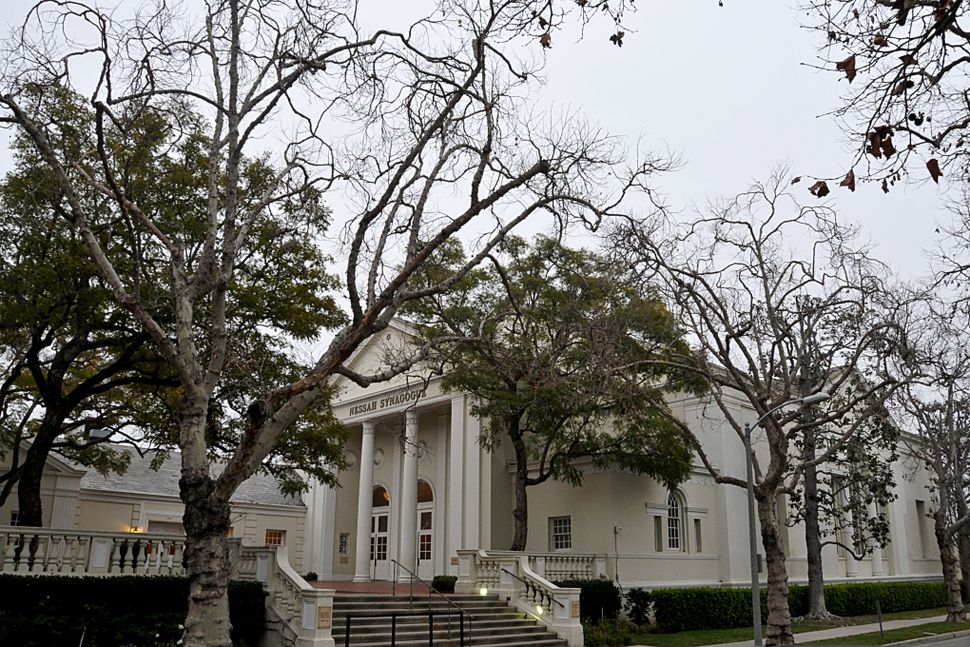 Some of Nessah’s Torah scrolls were desecrated by a vandal, but it might not be a hate crime. Image by wikipedia

Images of Torah scrolls yanked open, ripped apart, and strewn across the sanctuary at Nessah Synagogue in Beverly Hills last Shabbat has left a knot in the collective gut of the Los Angeles Jewish community and American Jewry more broadly, which is still reeling from a murderous attack at a Jersey City kosher market last week, and massacres at synagogues in Pittsburgh and Poway.

The desecration of Judaism’s most holy objects seems like it automatically deserves to be designated as a hate crime, and this incident is being investigated that way, for possible anti-Semitic motive, according to Lt. Elisabeth Albanese of the Beverley Hills Police Department. Yet in the end, police might decide it just doesn’t fit that category.

“We are not declaring this one thing or another at this stage,” said Amanda Susskind, Los Angeles regional director of the Anti-Defamation League. “This investigation is still ongoing. When a suspect is arrested, we may find a connection to a hate group, or that he was motivated by extremist ideology.”

Nessah, a congregation with more than 1,000 members, was founded by Rabbi David Shofet in 1980 to serve as a synagogue and cultural center for the Persian Jewish population. Los Angeles is home to the largest Persian Jewish population in the world, with a large concentration in Beverly Hills. Since 2002, Nessah has resided in a Greek revival building that stretches nearly the length of Rexford Drive, south of Wilshire Boulevard, about a half mile from Rodeo Drive.

Rabbi Shofet called for a community fast day on Thursday, Dec. 17. Fasting is a traditional response when a Torah falls to the floor or is desecrated. He invited the wider Los Angeles Jewish community, whose leaders have reached out to him, to attend Mincha services at Nessah at 3 p.m. on Thursday afternoon as show of unity and solidarity.

In addition, the Israeli American Civic Action Network and the city of Beverly Hills are hosting a town hall on anti-Semitism on Wednesday, Dec. 18 at the Beverly Hilton Hotel.

According to a statement by the BHPD released on Saturday, the suspect broke into Nessah at 2 a.m. on Saturday morning, after vandalizing several buildings along the same alley that runs behind Nessah. Pictures and reports by Nessah members show talitot (prayer shawls) piled on the floor, siddurim (prayer books) ripped apart, overturned furniture, and broken glass on the floor. Police say no one was injured, nothing was stolen, and structural damage was limited.

Usually in instance where extremist ideology has driven a crime investigators see someone eager to get publicity in the aftermath by live-streaming the act, or releasing a manifesto, or leaving behind hateful symbols or signs, Susskind said. So far, none of that has emerged with regard to Nessah and its brutalized Torah scrolls, although of course they have rattled the Jewish community.

Most disturbingly, the suspect pillaged a cache of Torah scrolls stored in the bima in the main sanctuary. The scrolls were all already pasul – an error or erasure in the hand-scribed text rendered the scrolls unfit for ritual use. The vandal unfurled several scrolls and tossed the exposed parchment over chairs and on the floor, crumpling and even tearing the stitched-together panels. The synagogue’s main scrolls were locked in the ark and were not touched.

Torah scrolls are considered sacrosanct. They are never allowed to touch the floor, hands do not touch the letters, and the scrolls remain garbed whenever they are not in use. When a Torah scroll is carried across a synagogue, everyone stands in respect.

The destruction of such objects would certainly seem to be a hate crime, but a crime committed on members or institutions of a protected group does not automatically mean that it is qualifies. Only when police have proved the suspect was motivated by hate and specifically targeted a synagogue or other Jewish structure is it declared as such.

And in this case, while police yet to apprehend the subject, a slight, young white male who was caught on security cameras, they also haven’t seen anything to indicate that the suspect was driven by hatred of Jews. He vandalized several neighboring buildings in the early hours of Dec. 14 before breaking into Nessah. California and other states have enhanced sentencing for hate crimes.

“Though it is not clear that hate was the motivation for the crime, the destruction of property, especially religious artifacts, makes it painful,” the board of directors and trustees wrote in an email to Nessah members on Sunday. “Whether this crime was committed by a hateful bigot or a common thug who seized an opportunity to trespass and vandalize, we will not be intimidated.”

Whether or not the vandalism at Nessah is found to be a hate crime, the ADL will count the incident in its annual audit of anti-Semitic incidents, which have been rising since 2015.

“It is still an attack on the Jewish community because of its effect, regardless of motivation,” Natan Pakman, senior associate regional director at ADL Los Angeles, said. “Whether a person breaks into a random building that happens to be a Jewish institution, or specifically targets a synagogue, it still has a terribly pernicious effect, and creates fear in the Jewish community.”

Over the last several years, security has become a major budget item for synagogues across the country. Shuls in Los Angeles started beefing up security after the 1999 shooting at the North Valley JCC, and increased after the September 11 terror attacks. Recently, as anti-Semitic incidents rise, many synagogues have full-time, armed security guards. The Jewish Federation of Greater Los Angeles launched the Community Security Initiative in 2012 to help Jewish institutions protect themselves.

Nessah itself has several guards and tight security when the building is in use, and reportedly has an alarm system. Whether its alarm was not armed or was faulty, it seems to have not gone off when the suspect broke in.

Torah Scrolls Were Desecrated In L.A., But It Might Not Be A Hate Crime