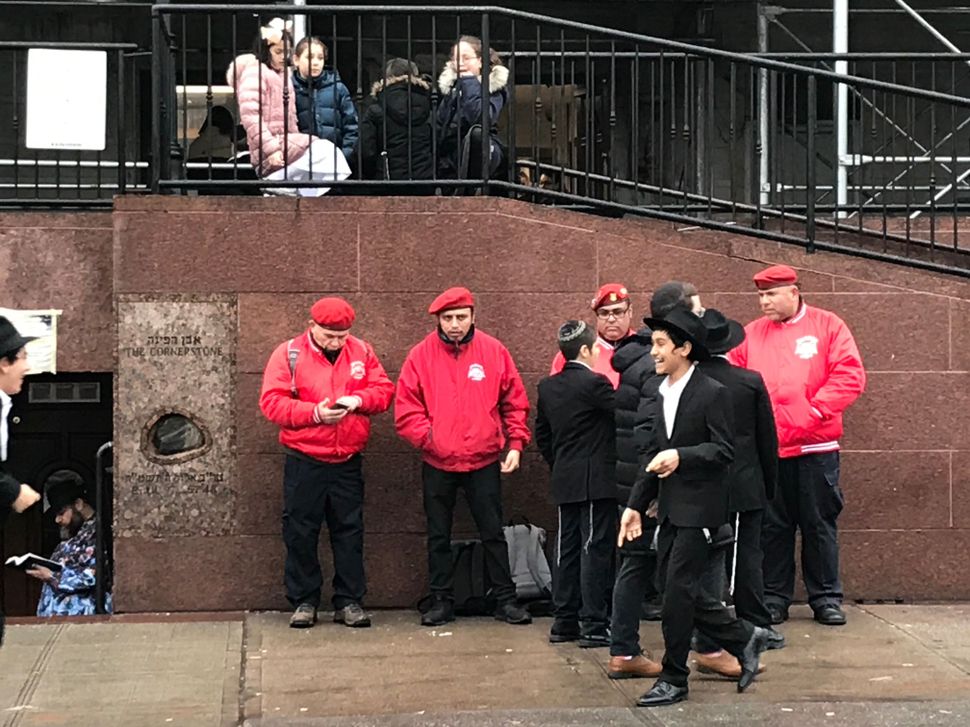 The Guardian Angels have posted themselves outside Shabbat Services at 770 Broadway, the headquarters of the Chabad Lubavitcher movement. Image by Helen Chernikoff

The crowd outside 770 Eastern Parkway in Brooklyn’s Crown Heights neighborhood on Saturday morning included all the regulars: Hasidic men in black robes tied at the waist, small girls in tights and Mary Janes, and women in wigs. Also hovering outside 770, as the worldwide headquarters of the Lubavitcher movement is known, were Benjamin Garcia, a longtime member of the Guardian Angels volunteer safety patrol group, three of his brethren, and two officers from the New York Police Department. 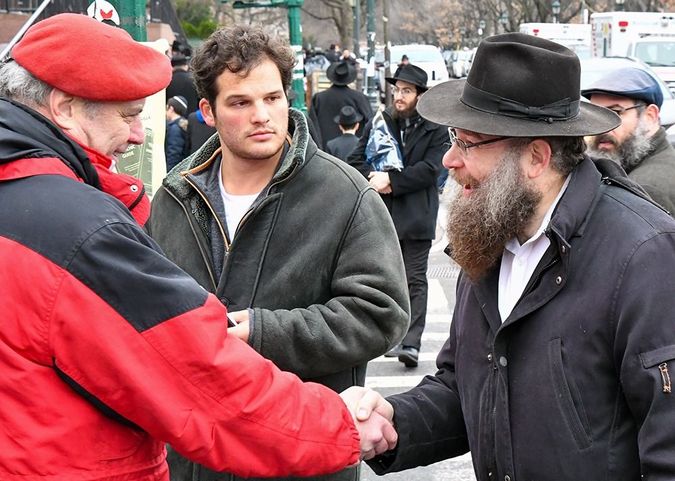 “We’re just walking around, making sure everyone is safe,” said Garcia, who joined the Angels shortly after it was founded amid the widespread crime and violence of 1970s New York. “We walk around to show everyone that we’re here.

“These,” he added, gesturing with his chin at the religious Jews swirling around him in the mist of an unseasonably warm but wet day, “and everyone else.” 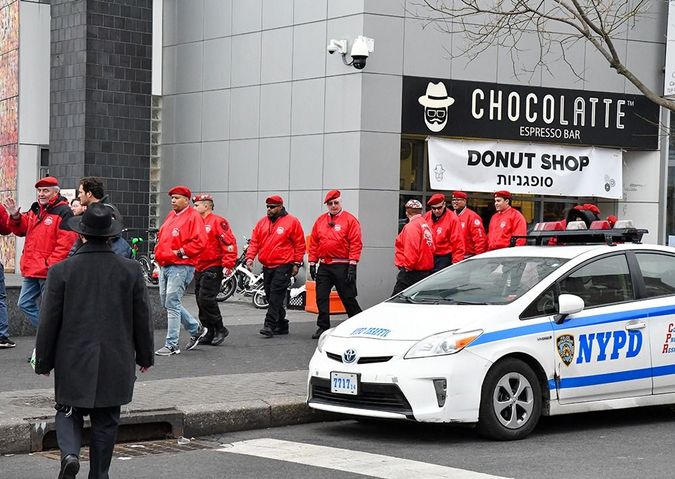 Members of the Guarding Angels, led by the group’s founder Curtis Sliwa, patrol down Kingston Avenue in the Crown Heights neighborhood of Brooklyn, Sunday, December 29, 2019. Image by John Kunza

By “everyone else” Garcia meant anyone who might want to bring harm to this Orthodox community, which has been plagued by violent attacks in the last weeks and months. The Angels and the police department both announced last week that they would increase their presence in Brooklyn neighborhoods like Crown Heights, Boro Park and Williamsburg that have been the main targets of what the Anti-Defamation League has deemed an “epidemic “ of anti-Semitic violence. 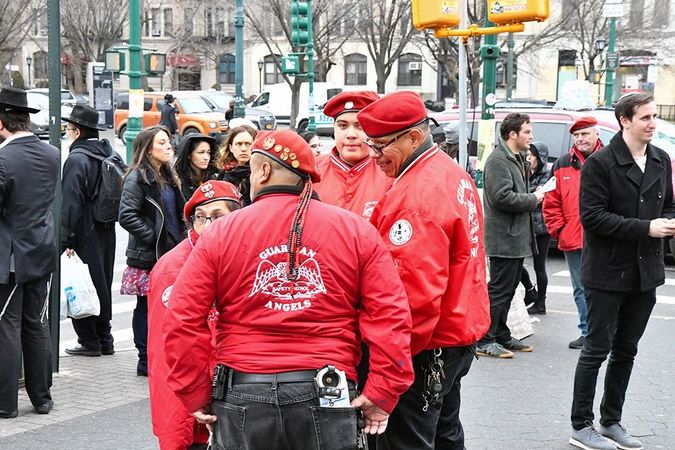 There were at least a dozen such attacks over the recent eight-day holiday of Hanukkah in the New York area, including one in which a man who grew up in Crown Heights stabbed five people at a holiday party in the Orthodox suburban enclave of Monsey; one of the injured remains comatose and in critical condition.

Also, on Dec. 29, a man walked into 770 and threatened to “shoot up” the building. These threats and incidents came only weeks after three people were killed in a kosher supermarket in Jersey City, N.J., the deadliest of an increasingly frequent series of attacks on Orthodox Jews, whose distinctive clothing, head coverings, beards and side locks make them easily identifiable. 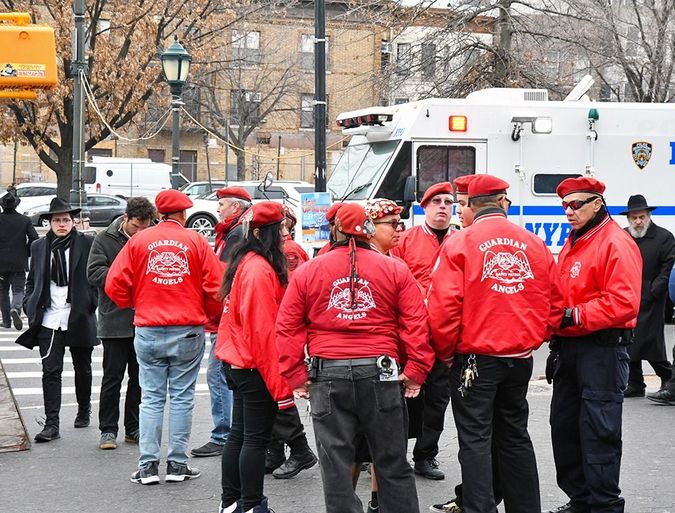 In response, the UJA-Federation of New York, an umbrella group, and several other major Jewish organizations have planned a “No Hate. No Fear” march across the Brooklyn Bridge and rally that is expected to draw thousands of people.

On Saturday, the Jewish day of rest, throngs of little boys were peppering the police officers and the Angels with questions.

“What’s that,” one of them asked, pointing at a black box affixed to an officer’s the jacket, just below her chin.

“That’s a body camera,” she said with a smile. “It’s recording you right now. Just kidding!” 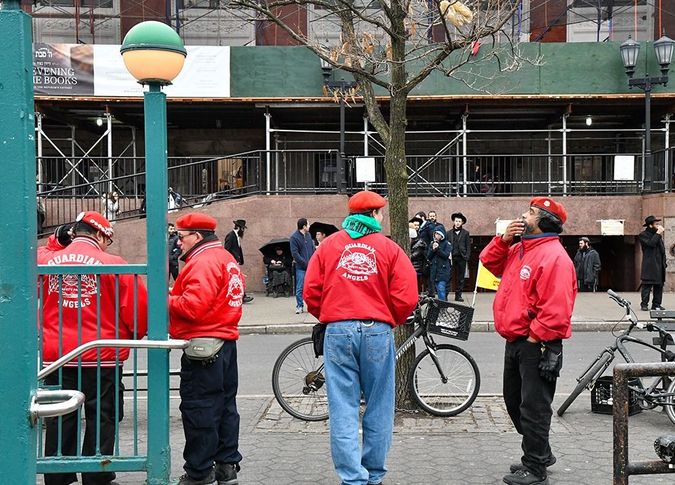 Members of the Guardian Angels stand outside of the Chabad Lubavitch World Headquarters in the Crown Heights neighborhood of Brooklyn, Sunday, December 29, 2019. Image by John Kunza

Some people headed into a nearby subway station stared at the bustling scene; others didn’t spare a glance.

Police vehicles and those of Hatzolah, the Orthodox volunteer ambulance service, are often stationed at this corner. The violence that erupted during Hanukkah was striking in its frequency, but it wasn’t new.

Throughout New York City, there were 220 hate incidents against Jews in 2019, up 21% from 2018, according to the New York Police Department.

A Haitian immigrant who gave her name only as Mary clicked her tongue sympathetically and said that she plans to encourage members of her family to volunteer with the Angels.

She said she feels connected to the Jewish community because she used to work as a caretaker for an elderly widower named Max, who once introduced her to the Rebbe, Menachem Mendel Schneerson, the beloved founder of the Lubavitcher movement who died in 1994.

The iconic image of a bearded, smiling Schneerson adorns homes, places of business and houses of worship across the globe. It also, Mary said, hangs in the car of Haitian cabdrivers who call Crown Heights home.

“We are all God’s children,” she said.