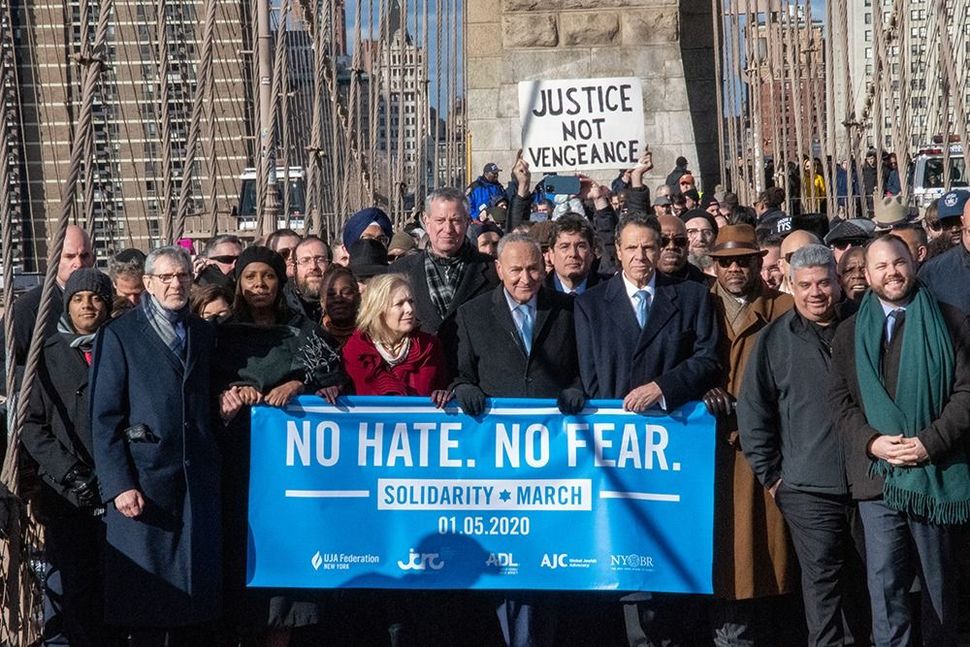 Local, state, and federal politicians joined Jewish leaders at the head of the “No Hate. No Fear.” solidarity march on the Brooklyn Bridge, Sunday, Jan. 5, 2020. Image by John Kunza

All the world is a narrow bridge, and the most important thing is to not be afraid.

So goes a famous Jewish folksong, and so was the experience of an estimated 25,000 people who marched across the Brooklyn Bridge in New York City Sunday for a rally against anti-Semitism dubbed “No Hate. No Fear.” Many people could be heard singing that exact song, adapted from the words of a Hasidic master, as they marched — along with am Yisrael chai — the nation of Israel lives — and other secular songs of protest.

The march’s musical diversity reflected a wide range of Jews and allies from across the New York region and from communities around the country. The Reform movement brought a contingent that included people from nearly every movement synagogue in the metropolitan area, according to the movement’s leader, Rabbi Rick Jacobs. Conservative Jews and Orthodox Jews — most of the people wearing yarmulkes — could be seen on the bridge, along with a smattering of Hasidic Jews.

A recent spate of violent assaults on Hasidic Jews — most recently a machete attack that left five people injured — inpsired the march. The message: Anti-Semitism is a worldwide problem, and that there are many allies the Jewish community hopes to help them fight it.

This is what 25,000 plus people look like making their way across the Brooklyn Bridge. #NoFearNoHate pic.twitter.com/LE3Na1sX1z

From Foley Square in Manhattan to Cadwell Plaza in Brooklyn, the mood was fun and celebratory. Chants broke out spontaneously: “We are Jewish, we couldn’t be prouder — and if you can’t hear us, we’ll yell a little louder.” Signs provided by UJA-Federation of New York and the Jewish Community Relations Council, the groups that initiated the event, were everywhere, alongside homemade signs with internet memes and pointed political statements. The Jewish singer and rapper Matisyahu sang his worldwide hits, “One Day” and “Jerusalem,” as the crowd sang along.

The organizers announced the event only last week, yet it drew a crowd that took several hours to cross the Brooklyn Bridge, as well as major politicians representing New York at all levels of government. Senator Chuck Schumer and Governor Andrew Cuomo spoke at the beginning of the rally, just outside City Hall, while New York Congressional Representatives, including Yvette Clark, Carolyn Maloney, Max Rose and Alexandria Ocasio-Cortez were seen on social media talking to supporters.

The crowd swelled to 25,000 over the course of the afternoon, according to estimates quoted by a representative for UJA.

“There are certain moments where we are obligated to stand up together,” said Rabbi Rick Jacobs, the head of the Reform movement, at the march. “There’s a lot that still divides us. But today we stand as one.”

Liberal, secular and modern Orthodox Jews who wanted to express solidarity with the visibly Jewish victims of anti-Semitism dominated the crowd.

“We don’t think of this as an anti-Trump rally, or anti-left, or anti-right,” said Victoria Cook, an administrator of the liberal Torah Trumps Hate Facebook group, at the march. “Anti-Semitism doesn’t have a brand.”

Some attendees came from Cleveland. Some crossed the bridge despite physical disability and struggle.

Joseph Varon, 69, walked the length of the bridge with his cane, keeping pace with the crowd. He had a hip replaced two months ago, he said, followed by an infection.

“George Washington said at Touro Synagogue, ‘To bigotry no sanction,’” Varon said. “That’s what our founding fathers had in mind, that everyone should be welcome in this country. It’s very important that we fight for what we believe in.”

People of all ages filled the crowd. Some confessed to have awakenings and epiphanies in the recent past to the importance of their Jewish identity, given the spotlight on anti-Semitism in the country.

“In the last couple of months it’s been more important for me to do things that help me identify with my religion and my culture,” said Jason Gruenfeld, 24. He said that he had recently begun volunteering with a Jewish organization, and joined boards for young professionals run by the UJA-Federation of New York.

The rally came as violence against identifiably Jewish people has crested in the New York area. In November, two Hasidic Jews and two non-Jews were killed when two assailants attacked a kosher grocery store in Jersey City. There were at least a dozen assaults on Orthodox Jews over Hanukkah around New York, and then the machete attack in the Hasidic enclave of Monsey.

Anti-Semitic incidents in general are slightly higher in New York City. The New York Police Department recorded 220 hate incidents against Jews in 2019, up 21% from 2018.

Just dumping the over 2,000 photos I took at the #NoFearNoHate solidarity march. Chabad was represented well after the march. pic.twitter.com/Zehyx6UB2l

The rally’s organizers may have created the event specifically to stand with Hasidic Jews, yet there were few of them at the rally. They make up about 6% of American Jews. Of those who did march, many were from the Chabad movement, which is known for its outreach to less traditional Jews. They follow the teachings of the late Rebbe Menachem Mendel Schneerson, including those encouraging men in the crowd to wrap tefillin, the ritual leather prayer straps. One such Chabad rabbi, Chayim Alevsky, said that while he tried to get passing men to stop and wrap, his family was marching.

“Hasidim prefer to demonstrate in a different way,” he said. “The rebbe, he instructed and inspired people that when things are going downhill in the world, to influence positivity in the world through doing mitzvahs, and specifically tefillin.”

Of the speakers, only one Hasidic leader — Rabbi David Niederman, who runs a Hasidic philanthropic organization in Williamsburg — spoke, via recorded video.

Proud to walk the Brooklyn bridge with fellow NY’ers sending a message that united we will always stand against Antisemitism. #NoHateNoFear #JewishandProud pic.twitter.com/Ch8Uarotng

There are a few reasons that Hasidic Jews did not come in larger numbers, according to those that were there. Today, for one, started the new seven-year cycle of Talmud study, whose completion tens of thousands of Orthodox Jews recently celebrated at the MetLife Stadium in Queens. Hasidic Jews are also culturally averse to public demonstrations, or calling attention to themselves in public in general, especially with a mixed-gender crowd. (Most Hasidic events are sex-segregated.)

Additionally, they may have balked at the many flags of Israel in attendance; Hasidic Jews, especially those that follow the large Satmar rabbinic dynasty, think that there should not be a Jewish state in Israel until the Messiah returns. (Hasids held two small counter-protests decrying the existence of the state of Israel.)

“The point is not Zionism, the point is against hate,” said one Satmar man, Meyer, who came to the march from Williamsburg. Meyer asked to be referred to by his first name to protect his privacy.

Meyer, 22, said he didn’t ask any other friends if they would join him; he preferred to come and show support alone.

“I just wanted to show up for the union of all people against hate,” he said. 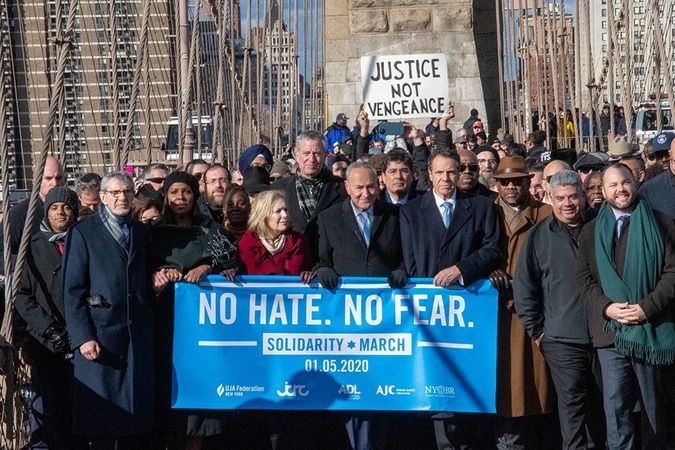 Local, state, and federal politicians joined Jewish leaders at the head of the “No Hate. No Fear.” solidarity march on the Brooklyn Bridge, Sunday, Jan. 5, 2020. Image by John Kunza

The rally drew a wide range of co-sponsors and supporting organizations. Many distributed a digital flyer for the event with their group’s logo attached to the bottom. Ahead of the event, there was chatter on social media that the broad tent could backfire, given that there is intense animosity between certain Jewish groups on a wide range of issues.

And indeed, the rally showed flashes of disagreement and enmity. People on opposite sides of the question of Israel did clash. Some of the speeches, applauded by one corner of the crowd, were met with dismay in another.

Some pics of the Jewish leftists who brought their full selves to the march today, despite disagreements with many of the speakers.

We know our safety lies in solidarity. The better world we are fighting for includes all of you.
#NoHateNoFear #JewishandProud pic.twitter.com/HDeYFWCzcP

In the same breath @DavidHarrisAJC asked the crowd not to weaponize antisemitism for political gain and pivoted to inciting against @RashidaTlaib. Shameful. David Harris does not speak for me. #NoHateNoFear

But many attendees’ nevertheless said that disagreement in Judaism, of all religions, is inevitable, and shouldn’t stand in the way of uniting against a shared threat.

“That’s what being Jewish is all about — arguing, discussing,” said Alan Galishoff, who came from Manhattan’s Upper East Side. Galishoff held a sign that read “Farrakhan = David Duke,” a reference to the leader of the Nation of Islam and the former politician and Grand Wizard of the Klu Klux Klan, both of whom have an extensive history of anti-Semitic statements.

To further the effort of fighting anti-Semitism, Gov. Cuomo announced that New York would increase the amount of funding it provides for security at places of worship. He has also increased the presence of state troopers in Hasidic neighborhoods, and said he would propose new legislation labeling hate crimes as domestic terrorism.

At the close of the march, the speakers switched between broad appeals to inter-religious and cross-cultural allyship — Frankie Miranda, head of the Hispanic Federation, donned a kippah (with permission) — and speeches that emphasized the embittered position of the Hasidic community.

“Despite us desperately sounding the alarm, until today we really have not seen nearly enough sympathy or understanding for this sad reality — even from some of our own,” said Chaskel Bennett, co-founder of the Flatbush Jewish Community Coalition.

Yet among the attendees, the question of the place of Orthodox Jews was clear: They are the canary in the coal mine, many marchers said.

“My father was once in a line like this,” said Rabbi Allen Schwartz, leader of Congregation Ohab Zedek in Manhattan. “They were being shot at in the forest. It didn’t matter who was an Orthodox Jew in that line.”

Update: We have changed the language in this article about the murder of Ari Halberstam.

For more rally coverage, scroll through the Twitter feeds of John Kunza, the Forward’s head of social media, and Ari Feldman, staff writer for the Forward, for photos and videos.