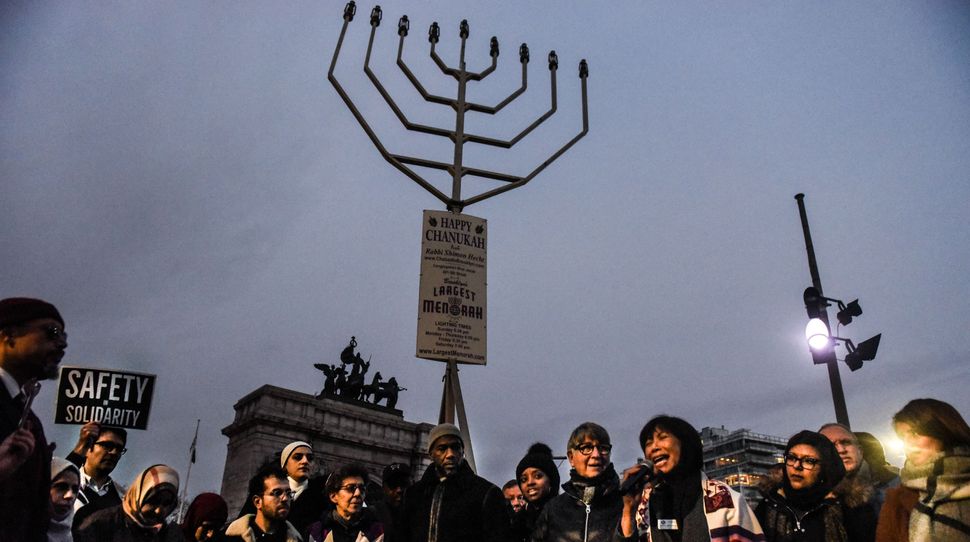 A Rabbi delivers remarks during a rally in support of the Jewish community on December 31, 2019 in the Brooklyn borough of New York City. Image by Stephanie Keith/Getty Images

Oniel Gilbourne was arrested in September after allegedly beating a 64-year-old Hasidic rabbi with a paving stone in Crown Heights, Brooklyn. While the community wondered aloud what was in Gilbourne’s mind, he likely heard a drumbeat of acronyms — MMPI-2, MCMI-II, WAIS-R — representing some tests used to assess mental illness.

Violent attacks on the visibly Orthodox have become a disturbing pattern in Crown Heights, a neighborhood that not only has a high concentration of Hasidic Jews, but also a sky-high rate of mental illness compared to the city as a whole, along with a recent influx of homeless shelters.

Law enforcement officials have indicated that about a third of the recent anti-Semitic attacks in New York were committed by people with documented psychiatric issues, though it is impossible to get more specific because the city has refused to release records regarding these cases despite repeated requests under the Freedom of Information Law. Few of the suspects’ names have been made public, which makes it difficult to know how many cases involved a psychiatric evaluation. And, the police department did not respond to a question about how many of the incidents lead to arrest.

The New York Police Department recorded 234 anti-Semitic hate crimes in 2019, up from 186 the year before, officials said last Monday. Crown Heights saw people attack Orthodox Jews with stunning regularity in the late summer and around Hanukkah, and in all different kinds of ways: Slapping, punching, kicking, knocking kippot off their heads, beating them with belts.

“There are people, some of whom have mental illness, who are vulnerable to influence by the trends that are occurring around them in society,” said Dr. Paul Appelbaum, a professor of psychiatry at Columbia University. “In a context in which anti-Semitic rhetoric is prevalent, they will pick that up.”

The former director of the New York Police Department’s Intelligence Analysis Unit, Mitchell Silber, was the first to quantify the number of hate crime suspects who are mentally ill in a December New York Times op-ed. He said city and state governments need to “treat mental health issues as the serious threat that they are.”

A spokesman for the Brooklyn District Attorney told the Forward in an email that Silber’s “ballpark figure sounded accurate.”

At least four high-profile cases of anti-Semitic violence in 2019 involved suspects with psychiatric issues, including Gilbourne and Tiffany Harris, a woman who allegedly slapped Orthodox Jews on the street in December. Harris’ case has generated controversy because she is accused of attacking another woman a day after her release without bail.

Lisa Schreibersdorf, a Brooklyn Defense Services attorney representing Harris, said New Yorkers with mental illness get good treatment in hospitals, but the city does not have adequate health care for patients once they get out. She said mentally ill people struggle to find affordable housing and reliable treatment options after discharge and are picked up by the shelter system— or worse, by the police.

“We pretty much drop them off a cliff,” she said.

In 2017, Mayor Bill de Blasio and his wife, Chirlane McCray, launched Thrive NYC, an initiative aimed at improving mental-health services in the city. Thrive has a $242.8 million budget, but critics say the initiative focuses too little on people with serious mental illness. For example, a significant chunk of the budget goes to school social workers and other referral services that don’t directly provide treatment.

Mental-health experts and advocates stressed that the vast majority of mentally ill people never become violent, and in fact, are more likely to experience violence themselves. In a statement, a city official denied that a high concentration of psychiatric hospitalizations in Crown Heights is contributing to recent anti-Semitic violence.

“While hospitalizations may be elevated in a certain neighborhood, it should not be equated with incidents of crime,” Department of Health and Mental Hygiene spokesperson Patrick Gallahue said in an email.

In the Crown Heights area, more than thirty percent of residents are using at least half their paychecks to pay rent, according to American Community Survey data. The climbing cost of living in Crown Heights leaves few affordable transitional housing for people leaving one of the neighborhood’s 13 shelters, three of which opened in 2017. Crown Heights hosts about 1,800 people in its shelters, most of which serve families with children.

About 25 percent of the country’s homeless population is seriously mentally ill, according to a 2015 assessment by the U.S. Department of Housing and Urban Development.

Schriebersdorf, of Brooklyn Defense Services, says people with recent criminal history can end up in homeless shelters because their records can make them ineligible for public housing, which perpetuates the cycle of instability, exacerbating symptoms that might lead to crime.

“They need to be in a structured, stable place so that they can get the treatment that they need,” she said.