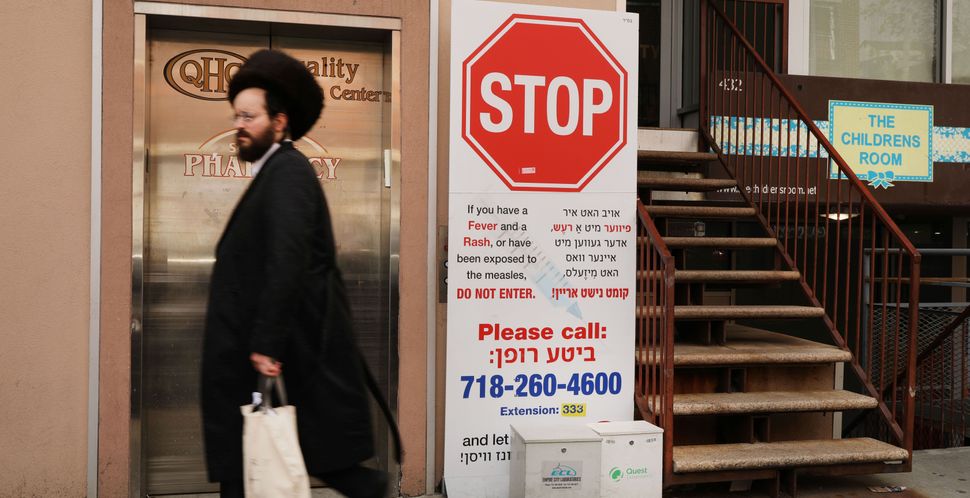 Posters implying that a major Orthodox Jewish political organization is opposed to requiring students to be vaccinated against the human papillomavirus (HPV) have been exposed as forgeries.

The fliers, discovered in the Borough Park and Flatbush neighborhoods of Brooklyn on January 14, use the logo of Agudath Israel of America, a lobbying, charitable and social services organization. They called on community members to fight a number of bills under consideration in the New York State legislature, including one which would require that all elementary school-aged children receive the HPV vaccine.

“If your seventh-grade [child] won’t get the Gardasil (HPV) shot to prevent her from getting an STD, she will not be allowed to have a Bais Yaakov education,” the posters read in all caps, using a term that refers to the Orthodox school system for girls. 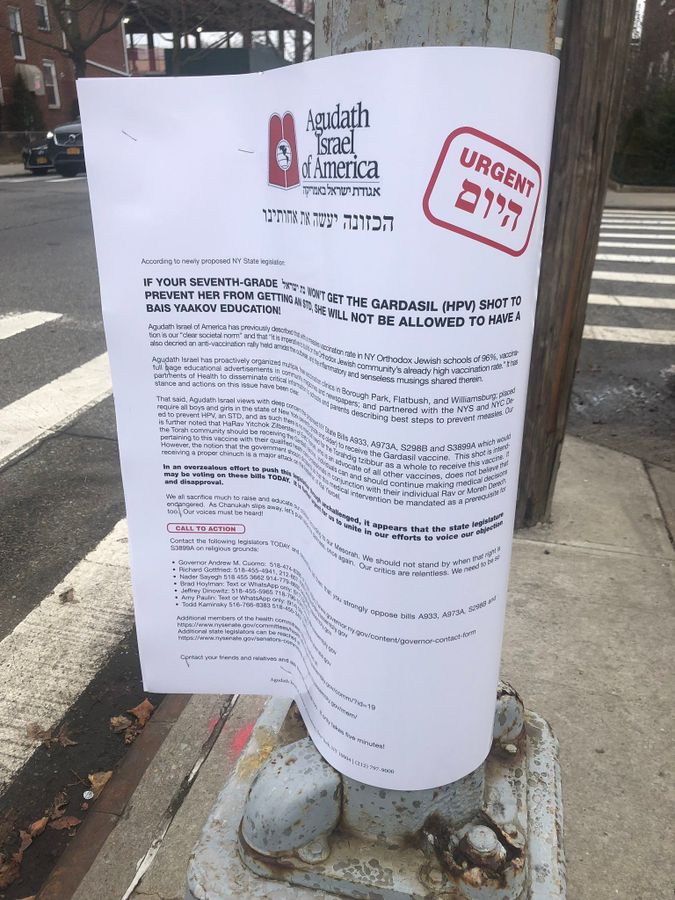 Agudath Israel said its logo was hijacked in the creation of these posters opposing the HPV vaccine for religious Jews. Image by Courtesy of Jaclyn Jeffrey-Wilensky

The phony poster’s text argued that the vaccine is unnecessary for school-age Orthodox children because it is designed to protect against HPV, a sexually transmitted disease. In fact, the CDC recommends that school-age children be vaccinated against HPV precisely so that they’re protected well before they become sexually active.

The posters falsely claimed that the bills were being put to a vote on the day they were posted, January 14; in fact, all are still being considered, having been referred to the Health Committee on January 8. The person or group behind the fake memos has not been identified.

“These memos are COMPLETE FORGERIES and Agudath Israel disavows any associations with them,” Agudath Israel said in a statement issued after the posters were discovered.

The group found out about the forgery when one of the legislators named in the flier called them, angry about the poster’s message to deluge his office with phone calls, said Rabbi Chaim Dovid Zweibel, executive vice president of Agudath Israel.

“We’re delighted that this guy called us to scream at us, because at least we get to set the record straight,” he said.

Neither Zwiebel nor the Agudath statement took a stance on the HPV bill. The organization has also not formally expressed a position on vaccination more generally, although it has sponsored vaccination drives and also issued a statement noting that people affiliated with their organization support measles vaccination.

Anti-vaccine activists have shared misleading information with New York’s Orthodox community in the past. A report by the Vaccine Task Force, which includes Orthodox healthcare professionals, identified misinformation, cherry-picked quotes and biased and discredited sources in materials circulated by Parents Educating and Advocating for Children’s Health (PEACH), a local anti-vaccine group. And at an anti-vaccine rally held in Monsey last May, speakers falsely claimed that vaccines cause developmental disabilities and that vaccine-preventable illnesses are beneficial to human health.

Blima Marcus, a nurse practitioner at Memorial Sloan Kettering Cancer Center in New York City and leader of the Vaccine Task Force of the EMES Initiative, said that all young people should be vaccinated regardless of their religious practices, which may include abstinence from sex until marriage.

“Even in communities that follow religious lifestyles that might reduce their risk of developing HPV, we know the risk is not zero,” she said. “It’s just not worth it to be exposed to a disease that has terrible ramifications when there’s a method to counter it.”

Jaclyn Jeffrey-Wilensky is a health and science reporter based in New York City.

Correction, January 17, 12:58 p.m.: A previous version of this story identified the Vaccine Task Force of the EMES Initiative as affiliated with the New York City health department; in fact, it is a non-profit organization unaffiliated with the government.