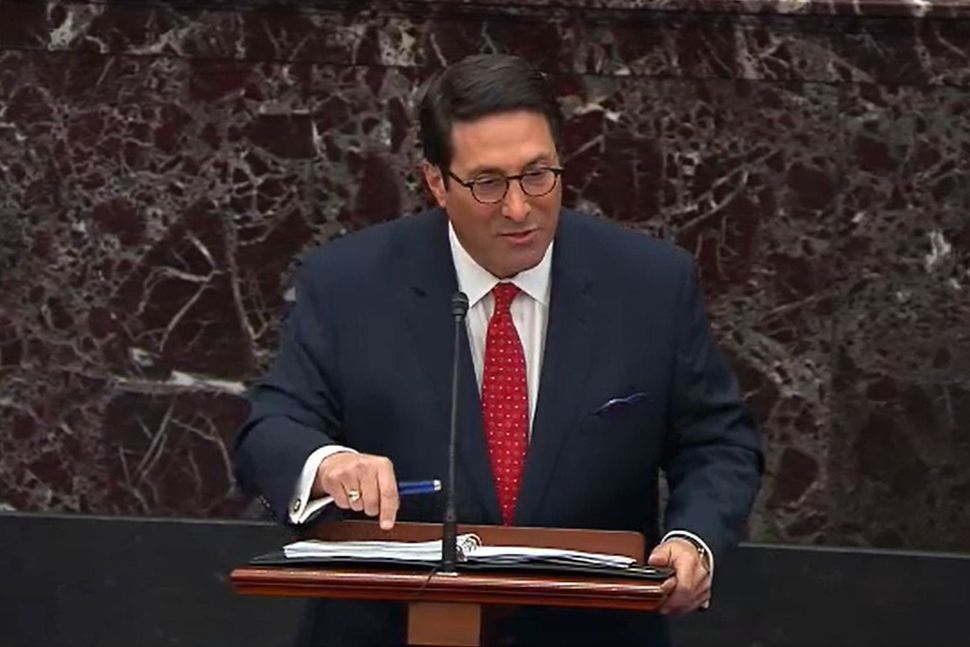 Jay Sekulow, the Bar Mitzvah boy who converted to Christianity, became one of the nation’s leading evangelical legal advocates and is now co-leading President Trump’s impeachment-defense team, said in an exclusive interview that he has no idea how he was selected for the role other than by “God’s hand.”

Sekulow, who along with the White House Counsel heads a team of eight lawyers including Alan Dershowitz and Kenneth Starr, declined to discuss strategy or specifics about the trial scheduled to start on Tuesday in the United States Senate But in a half-hour telephone conversation, he discussed his Jewish background, his conversion to Christianity, and how he first met President Trump — at a charity event well before the 2016 campaign.

“Everything I’ve worked on in my career has in a sense prepared me for this moment,” said Sekulow, a champion of the Christian right in both the U.S. Supreme Court and on talk radio. “I see God’s hand in anything that takes place in my life.”

Sekulow, 63, is a man who has previously described himself, on the record, as both “a nice Jewish boy” and “a reasonable fanatic.” He is a Messianic Jew, brought to the belief that Jesus was the son of God through an organization called “Jews for Jesus.” He said he worships, “when he can,” at Cong. Beth Adonai in Atlanta, which is led by his brother, Rabbi Scott Sekulow. Beth Adonai’s Website describes it as a Messianic congregation where “Jews and Gentiles worship together” the way that Yeshua — Jesus — and his disciples did.

In the interview with the Forward on Monday, Sekulow dismissed as “nonsensical” the notion, popular in some right-wing circles, that the impeachment is some kind of Jewish plot because many of the key House Democrats involved, including Adam Schiff and Jerry Nadler, happen to be Jewish. Born in Brooklyn and Bar Mitzvahed at Temple Or Elohim in Jericho, N.Y., Sekulow said that despite his long-ago conversion and belief in Jesus Christ, he “never felt not Jewish.”

“I always considered myself Jewish,” he told me. “My heritage and my upbringing and my family’s faith, all of that plays a role in my view of justice.”

Sekulow said the interview with the Forward was the only one he planned to do ahead of the impeachment trial, and that he agreed to do it because I have been writing about him on and off for more than a quarter century — and because his great-uncle, Sonya Sekular, worked for the Forward in the 1940s, Sekulow said.

I first interviewed Sekulow in 1993, when he was a pudgy young lawyer with a mustache and thick glasses, and I was investigating a Christian ministry called Trinity Broadcasting Network for the Los Angeles Times. Sekulow had impressed the network’s founders, Jan and Paul Crouch, with a string of Supreme Court victories starting with a 9-0 decision in 1987 that allowed Jews for Jesus to distribute literature at Los Angeles International Airport.

The Crouches let Sekulow guest-host the network’s signature program, “Praise the Lord,” then gave him his own show, then helped him and his associates acquire five television stations and poured $3 million into his public-interest law firm, called Christian Advocates Serving Evangelism.

As I wrote back then, Jan Crouch often referred to him as “our little Jew,” which Sekulow insisted he did not find patronizing. “You have to take it in the context that they meant it,” he told me. “They don’t mean it as an offense. They’re so excited that you’re Jewish.”

Sekulow, who now lives in Tennessee, moved as a teenager from Long Island to Atlanta, where his middle-class family joined The Temple, that city’s iconic Reform congregation. But Sekulow slipped away from Judaism at age 18, after an encounter with the Messianic group Jews for Jesus on the campus of Atlanta Baptist College — today, Mercer University, where he also went to law school.

During those undergraduate years, he has said, he was influenced by his own growing questions about Jesus, by a charismatic New Testament professor who happened to be married to a woman who had converted from Judaism, and by meeting a young Christian woman, Pamela McPherson, to whom he has been married since 1978.

Paul Crouch, his patron in the 1990s, told me years ago that he saw Sekulow as part of “God’s master-plan strategy to not only introduce wonderful Jewish people to Jesus Christ as Messiah, but to unite Jews and Gentiles in a religious sense.”

The Crouches later urged Pat Robertson to establish the nonprofit American Center for Law and Justice and make Sekulow its director. He had a warm, gentle and self-deprecatory humor, and the irony of his growing influence was not lost on him.

In part because his zeal was not doctrinaire, Sekulow was also refreshing. During our interviews decades ago, he downplayed – but never denied – his early acceptance of the label “First Amendment absolutist.” Occasionally, as if to poke his base, he would put lawyers from the American Civil Liberties Union on his Trinity Broadcasting program.

He acknowledged that some of his views on free speech – like supporting adult-bookstore and theater operators – had caused him blowback from some conservative groups including Concerned Women of America. He also irked some allies with his opposition to official prayers, and proselytizing, in public elementary and middle schools; he said it was potentially coercive.

Sekulow had no prestigious clerkships or white-shoe law firms on his resume; his first job was at the IRS. Much later, in 2005, he earned a PhD from Regent University, with a dissertation on the religious influences on Supreme Court justices and their opinions.

He was unquestionably smart — critics called it cunning — driven and ambitious.

Sekulow’s early career was marked by stumbles and saves. His first law firm had to declare bankruptcy after a lawsuit accused it of tax fraud, but the founder of Jews for Jesus tapped him shortly afterward to handle the LAX case.

“I almost feel like God raised me back from the dead,” Sekulow told the Atlanta Journal Constitution in 1991. “It was a spiritual rebirth.”

Years later, Sekulow and his organizations managed to emerge largely unscathed from a series of controversies about financial improprieties, reported over a decade [in The Nashville Tennessean] (https://culteducation.com/group/1205-tv-and-radio-preachers/21077-tennessee-lawyers-family-firm-collect-millions-from-charities.html), The Guardian and The Washington Post, among others. The articles included charges that he raised and shifted millions of dollars to nonprofits controlled by his family members, and channeled money into media production, private-jet leasing, salaries and contracts to his relatives. Sekulow’s firm did not deny the facts but said the Tennessean’s portrayal, for example, was “misleading and inaccurate,” presenting “a biased and distorted picture of the truth.”

In the late 1990s, I reconnected with Sekulow when he started flying into Orlando, Fla., for classes at Reform Theological Seminary; I was at the time writing about the political rise of suburban white evangelicals for The Orlando Sentinel. Despite our fundamental theological and political differences, we had a relaxed, social dinner with our wives, including some good-natured, off-the-record dishing about national evangelical leaders.

Sekulow seemed unaffected by his growing fame, and we agreed to dine again, which we didn’t, and to keep in touch via email, which we have sporadically.

So when he was tapped to head Trump’s impeachment team, I reached out to him on behalf of the Forward. He emailed back at 11:07 p.m. Saturday night — “so great to hear from you. Glad your family is doing well. Pam and I have 5 grandkids!” — and agreed to chat, on the condition that we would not discuss specifics of the charges or defense strategy.

The first thing I asked was whether he still believed in an expansive view of the First Amendment. Yes.

“I’m a literalist,” he said. “I take a very broad view of First Amendment protections,” he added, explaining that Muslims have the same rights to pray at public schools or official venues as Christians. “I’m absolutely an equal-access guy.”

But he quibbled with my suggestion that luck had played a big role in his career.

“Everything happens for a reason,” he explained. “God orchestrates these things.”

Sekulow co-owns the private firm Constitutional Litigation and Advocacy Group, which has been operating out of a Pennsylvania Avenue office building, not the White House. He said he did not seek the role representing the president, which began with the Mueller investigation in 2017, and that before his appointment he had only met Trump once, and made a few scattered defenses of his policies on his T.V. and radio show, which airs on Christian and conservative networks.

“I never asked him how he decided to pick me,” Sekulow said in the interview.

In October, Sekulow posted to Facebook, where he has 4.5 million followers, a video that segues from a montage of impeachment-related clips to a thumping performance by The Jay Sekulow Band of “I Heard It Through the Grapevine.”

“This manufactured impeachment inquiry started over what this so-called whistleblower essentially heard through the grapevine,” says Sekulow, the band’s drummer and guitarist. This is nonsense.”

I mentioned that back when Sekulow was appearing in Christian broadcasting, he was loose and funny. Now, defending Trump on Fox News and CNN, he seemed to have developed a harder edge.

At this, I thought I heard Sekulow sigh.

“We live in a very different world from when we met in the ’90s,” he said wistfully. “You don’t have to change your positions, but the way in which you put them has changed. Funny doesn’t work anymore.”

Mark I. Pinsky is a religion writer based in Orlando, Fla., and the author of the 2006 book, “A Jew Among the Evangelicals: A Guide for the Perplexed.”

Clarification, January 21, 7:38 p.m.: An earlier version of this story asserted that a great-uncle of Jay Sekulow’s worked for The Forward in the 1940s but neglected to attribute this statement to anyone. Sekulow is the source.