Here are the first reactions to Trump’s peace plan 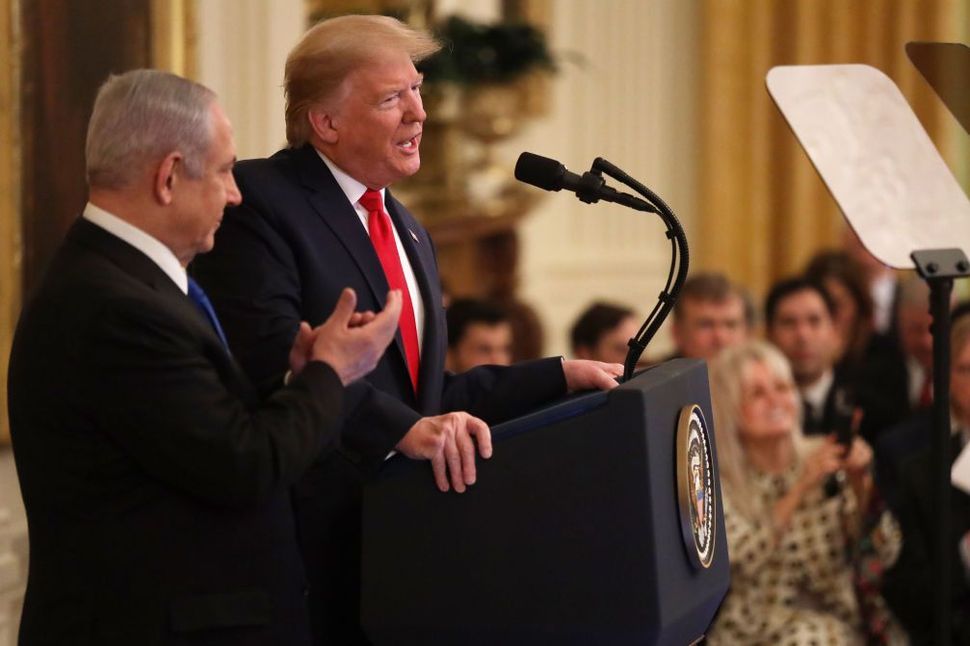 In a briefing at the East Room of the White House, President Trump unveiled a new peace plan that would preserve Israeli control of Jerusalem and settlements in the West Bank, while endorsing a Palestinian state and promising billions in dollars to help develop it. Even before the speech had ended, journalists, commentators, and thinkers had already begun to share their first reactions on Twitter. Here’s what some of them were saying.

Before the briefing began, reporters noted the presence of pro-Israel philanthropists Sheldon and Miri Adelson, as well as Jared and Ivanka Kushner, Republican members of Congress like Ted Cruz, and evangelical leaders like former Christian Coalition executive director Ralph Reed.

The Israeli press turned out in force.

An Israeli reporter climbing on a ladder in the White House Press Room to get the best view is truly the best symbol of the Israeli spirit. https://t.co/ks9NqBLFY0

Israeli press has completely taken over the briefing room pic.twitter.com/09miCPJqDh

Jill Jacobs of T’ruah: The Rabbinic Call for Human Rights had a Talmud-based take.

I know that if Kushner, Netanyahu and/or Gantz are doing daf yomi, they won’t get to Nezikin for a few years, but spoiler alert…it takes two to make an agreement, and one half of the parties weren’t invited. https://t.co/CkYIPN6Low

Jonathan Schanzer of the Foundation for Defense of Democracies think tank had praise for the deal.

At the same time, even if Israeli lefties argue with elements of the deal, this breathes new life into the two state solution. And Grants appears to be embracing this with his calls for dialogue with the Palestinians and Jordan.

But Forward columnist Muhammad Shehada described it as a precursor to annexation of the West Bank.

The goal of #Trump’s ‘peace deal’ has always been to get #Palestinians to reject it; every aspect of the plan is meant to bait us into rejecting the deal to give #Netanyahu an alibi for unilateral annexation then blame us for it — My Latest in @jdforwardhttps://t.co/rpv8ykFXny

A few key unanswered questions in Trump’s #MiddleEastPeacePlan :
1. What about the Jordan Valley?
2. Palestinian capital where in East Jerusalem?
3. Which Israeli settlements would be annexed, all of them?
4. Who is going to build tunnels/bridges to Gaza?

Ah,”the distinguished pastors here,” a key to the timing of this presentation.

I’m not sure Trump actually promised this list of promises Netanyahu is now listing. Anyone hear all these details in Trump’s presentation?

The Washington Examiner’s Seth Mandel predicted the media reaction would be negative — and had scorn for the doomsayers.

The reaction to this plan will be a parade of failed Mideast negotiators with a partisan axe to grind being asked by CNN and NYT to weigh in and ‘explain’ something they have proved they’ve never understood.

Almost everyone had something to say about Trump’s reference to the “al-Aqua Mosque” (he was referring to the al-Aqsa Mosque, which is located on the Temple Mount in Jerusalem).

Al Aqua Mosque??? thats all you need to know folks…

Wait how does one visit the”Al Aqua Mosque”?

Here are the first reactions to Trump’s peace plan