I got to ask Sanders about being Jewish on CNN, but that won’t decide my vote. 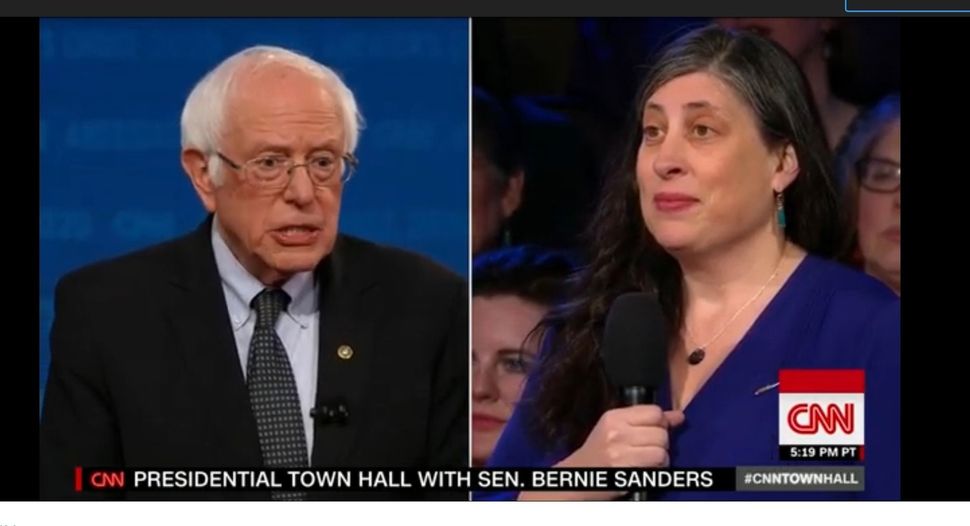 Loren Selig, a longtime activist and professional realtor in New Hampshire, asked Sen. Bernie Sanders about being Jewish at a CNN Town Hall. Image by CNN

What does it mean to be Jewish? For me, it is the lens through which I view the world. My responsibility is to tikkun olam (repairing the world) whether by feeding the hungry or welcoming immigrants or fighting for justice. Senator Bernie Sanders has spoken of his Jewish heritage while acknowledging he does not actively practice religion.

In New Hampshire, we are lucky to have incredible access to the candidates at intimate events as well as large ones. In the current primary cycle, I have attended events and met with 20 of the Democrats who entered the race. But I was caught off-guard when I was invited to a breakfast meeting with Senator Sanders on Rosh Hashanah. A different candidate participated in a similar event on Yom Kippur. I did not attend either of these events. As much as I think Jewish values require us all to be actively involved in the political process, I also think honoring the High Holy Days supersedes it.

As a result, when I was sent an invitation to submit questions to CNN for eight of the current Democratic candidates with the hope I would be selected to attend the Town Hall events, one of the many, many questions I sent in asked Senator Sanders how he thinks his Jewish heritage frames his view of the world and politics. I was both delighted and a bit terrified when CNN notified me I would be asking that question on Thursday. Hearing Anderson Cooper call me by name and then having him smile at me was amazing!

Senator Sanders did a good job of sharing some of his personal experiences as a child. He clearly took the question to heart and spoke eloquently about the impact of the Holocaust on him and his family. I would have liked him to speak a bit more about how his heritage impacts his world view now and which of those values influences his decisions. The format of the event didn’t allow me to add more to my question or ask a follow up.

I expected my immediate friends and family to be excited to see me ask a question on CNN. What I did not expect was for it to go viral. Senator Sanders posted a video clip of my question on his page and then sent it out over social media. So did CNN. Before I got home, I received messages, photos, and links to the coverage from family and friends living around the world.

I have been overwhelmed by family, friends, and strangers asking me further questions… I made the mistake of going into Twitterland and reading comments. Many were positive but some suggested my question was inappropriate or irrelevant.

The big question is whether this one answer to this one question will be the factor that decides my vote. The answer is no. On Tuesday, I will step into a voting booth with my ballot in hand and I will make the mark for the candidate that I think is the best choice for our entire country, wishing that we all had ranked-choice voting. I am so glad I have the opportunity to ask questions and I pledge to keep seeking answers for our country. I encourage everyone to do the same.

Loren Selig is the mom of two amazing girls, wife of a public official, REALTOR®, activist, and ally. She has been involved in the political process since 2nd grade when Amy Carter attended the same DC public school she did, and she has lived in New Hampshire since 2004.

Correction, Feb. 10, 10:45 a.m.: A previous version of this article stated that New Hampshire has ranked-choice voting. In fact, a proposal to adopt that method of voting in the primary was shelved last February, but it remains a goal of some activists.

I got to ask Sanders about being Jewish on CNN, but that won’t decide my vote.