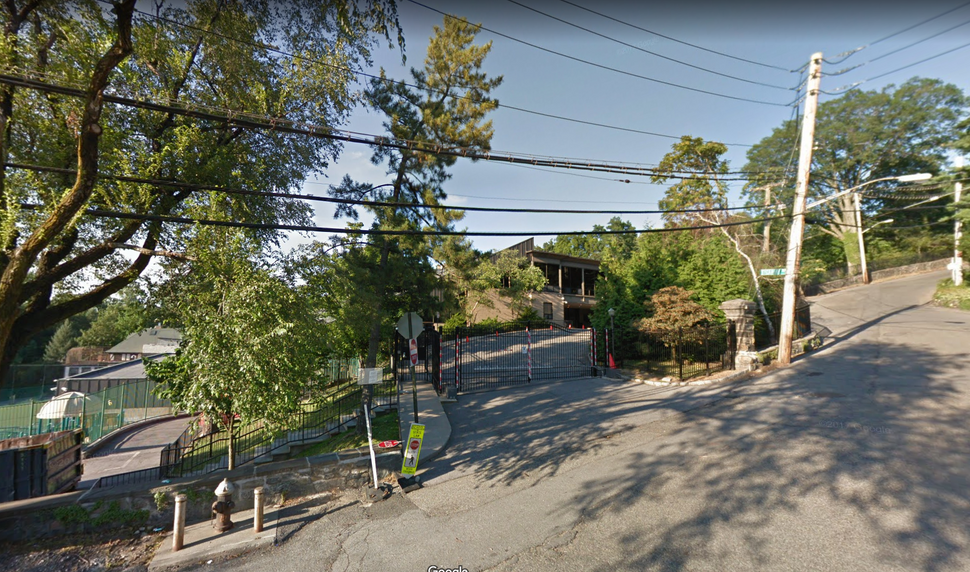 The entrance to SAR Academy. Image by Google Maps

Coronavirus has arrived — not only in New York, but in the city’s Jewish schools.

Three day schools in the New York area announced Tuesday they would be closed for at least a day after a Jewish Westchester man was hospitalized with what public officials described as a “serious” coronavirus infection.

The man, who authorities have not identified for privacy reasons, is a parent of a student at SAR High School, a Modern Orthodox school in the Riverdale section of the Bronx. Both SAR’s high school and its K-8 lower school, with over 1,400 students total, closed Tuesday.

Stay on top of this breaking news story, signup for our daily newsletter here.

In an email sent to the SAR community early Tuesday, the school’s principals urged people to “remain calm” and follow CDC-recommended guidelines for minimizing the spread of infectious diseases,) such as washing hands frequently and not touching ones face. In a second email, the school said it was consulting on what to do next with public health officials. A representative for SAR declined to say when the school would reopen.

Yeshiva University said that it would be continuing classes and programs as usual.

The infection of the Westchester man has also prompted the closing of a synagogue in New Rochelle, where the family is from. New York health officials have ordered Young Israel of New Rochelle, an Orthodox synagogue, to close temporarily, and are asking hundreds of congregants to self-quarantine.

While the man was not at synagogue over the weekend, according to the synagogue’s executive director, health officials are asking anyone who attended previous services, including a bat mitzvah and a funeral last week, to self-quarantine as well, until at least March 8.

The infection in the SAR community has put the closely knit world of New York City-area Jewish day schools on high alert, since their social networks overlap with local synagogues and Jewish community centers. Two schools in Westchester — Westchester Day School and Westchester Torah Academy — also closed, citing the infection occurring in their community, making the decision to due so in the middle of the morning school bus rush.

“It’s interesting that the email said don’t panic — I think everyone is panicking a bit,” said Anya Wiebke, who has two children who attend SAR’s lower school. “There’s been a lot of panic about the coronavirus worldwide, and the fact that its hitting home is a little scary.”

Wiebke said that the overall lack of information about the situation has heightened concerns among parents.

“Nobody knows who the person is, or if they were in shul this past weekend,” she said, using the common Yiddish term for synagogue.

Her son, who is in fourth grade at SAR had a different but very age-appropriate response. He followed snow-day protocol and immediately asked for a playdate.

But the virus does not pose any unique risks to the Jewish world or the Modern Orthodox world, even with its culture of frequent communal gatherings and weekly Sabbath services, according to Dr. Aaron Glatt, an infectious disease expert who is also an Orthodox rabbi. He said that the rules for preventing the spread of infection are the same as in the secular world.

“Practice good infection control. If you’re sick don’t go to shul,” said Glatt, who is the chairman of the department of medicine at Mount Sinai South Nassau hospital. “If you are not feeling well, be careful with personal hygiene: Cough or sneeze into a tissue, then throw the tissue away. If there’s no tissue, sneeze into your elbow, and always wash your hands.”

The man diagnosed with the virus — a 50-year-old lawyer who works in Manhattan — has a prior respiratory issue, officials said, but does not have any clear connection to countries where there are widespread outbreaks of the virus.

That means that the infection in the SAR community is marking a turning point for the coronavirus in New York, which has infected over 90,000 worldwide and killed 3,000. Now, the virus is likely spreading via “community spread”: among people with no known connection to preexisting outbreaks around the world. (The first case of the virus in New York, reported last week, was a health worker who recently returned from Iran, where there is an outbreak.)

While the news has some parents worried, SAR teenagers are reacting with a wait-and-see attitude.

“There’s all this hysteria that’s been happening,” said Maya Rubinstein, 17, a senior at SAR. “It feels like, now the hysteria has reached us. When’s it gonna blow over?”