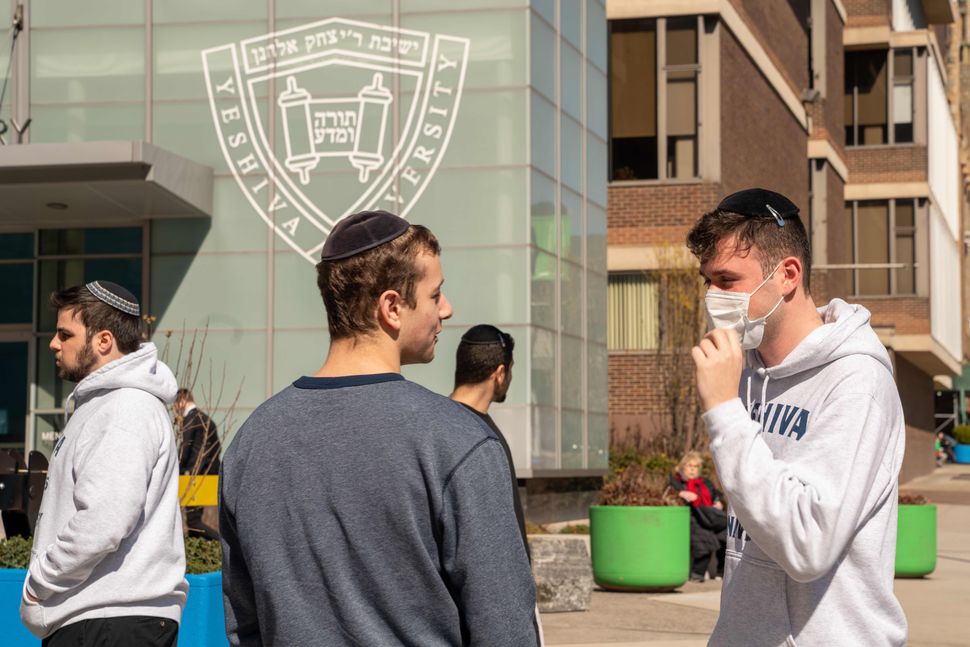 Students on Yeshiva University’s Wilf Campus in upper Manhattan Wednesday, after the school announced it would partially close the campus after a student of the university was confirmed by health officials to have coronavirus. Image by Getty

Editor’s note: This article originally said, incorrectly, that Sen. Ted Cruz of Texas had self-quarantined after attending last week’s AIPAC policy conference, where several of the 18,000 attendees have tested positive for coronavirus. In fact, Cruz, a Republican, took the steps because he had interacted with an infected person at a different conference, the Conservative Political Action Committee. The Forward regrets the error.

More people are quarantined over coronavirus fears as the number of people diagnosed with the virus continues to increase. Here are the latest bulletins on how coronavirus is impacting the Jewish community:

Yeshiva University, where a student has tested positive, notified its faculty on the afternoon of Sunday, March 8, that it was revising its strategy for confronting the virus. An email told faculty that the school was extending its cancellation of in-person classes at two of its campuses, including the flagship Manhattan campus, until at least until March 15. While graduate students will start online classes on March 11, undergraduate classes won’t start either online or in person until March 16. The email asked all faculty to learn or brush up on their knowledge of distance learning technology. “Please watch for additional messages in the days ahead as this is a constantly evolving situation,” wrote Karen Bacon, an undergraduate dean.

A Bronx high school, SAR, which also has a student infected with the virus, has likewise extended its quarantine.

Young Israel of New Rochelle, an Orthodox synagogue in suburban New York that is one of the sites of the outbreak because a diagnosed man attended a Bat Mitzvah there, is closed through March 14, according to its website.

Some synagogues — the historic Spanish and Portuguese Synagogue and Ansche Chesed, both on Manhattan’s Upper West Side — are still holding Purim services but have cancelled their festivities, according to the Washington Post.

Other synagogues let congregants know — with a note of defiance — that Purim services and carnivals would go on as planned, albeit with precautions and a lot of wiping of surfaces. The Conservative East Midwood Jewish Center of Brooklyn sent the word out through listservs for parents that it was “forging ahead” with its Sunday carnival and would be “doing its best to wipe things down,” but the costume parade, games and traditional dessert of hamentaschen would still be on offer.

Congregation Har Shalom in Montgomery County, Md., has likewise not canceled its carnival or Purim celebrations despite the exposure of the Jewish community in that part of suburban Washington, D.C. to the virus. In late February, a carrier who had contracted it in Egypt attended a mourning ritual attended by as many as 100 people in late February.

A third person who attended last week’s American Israel Public Affairs Committee policy conference tested positive for coronavirus, according to Haaretz.] This person is from Los Angeles, Haaretz reported. AIPAC had previously told the 18,000 conference attendees that two New York residents who attended the conference had tested positive, but that they did not pose a risk to others and attendees need not self-quarantine or take any action unless they felt sick.

The Jewish Funders Network, a not-for-profit that helps philanthropists to coordinate their efforts, cancelled its conference, which was to be held in Palm Beach, Fla. March 22 through 24. “The safety and peace of mind of our participants needs to be our foremost consideration,” wrote David Ezer, the vice president of programs, in an email. The group might try to reschedule, and if that isn’t possible, it will create “virtual versions” of the programs participants would have attended at the conference.

Two residents of Rockland County, N.Y. who worked in food service exposed visitors to the Atrium Wedding Hall on March 2 to the virus, according to Yeshiva World News.