Jews will vote for Sanders against Trump, but many won’t like it. Why? 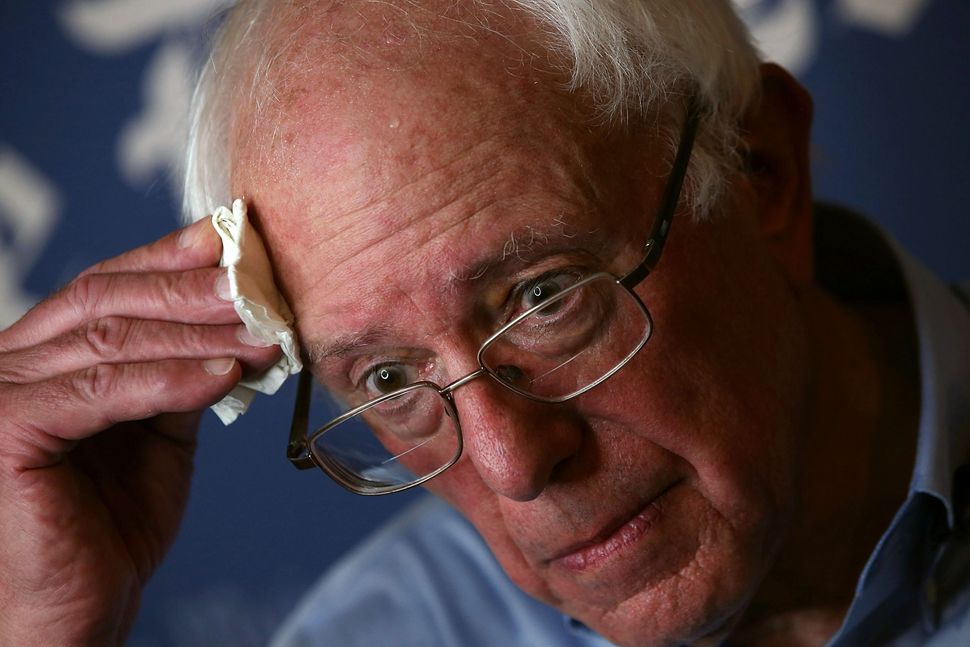 Four years ago, Loren Selig was thrilled to support Sen. Bernie Sanders of Vermont for the Democratic nomination for president. Now, not so much.

Like Sanders, she’s a New York transplant to New England and a passionate progressive. In 2016, she saw his emphasis on people caring for one another as very Jewish.

But this time around, the candidate’s campaigning on Rosh Hashanah and Yom Kippur just didn’t sit right with Selig, who is 50. She earned a few minutes of fame asking Sanders about his Jewish identity on a CNN town hall in her home state of New Hampshire, but two days later voted for Sen. Elizabeth Warren of Massachusetts in the primary.

“Where he has promoted himself as a Jewish candidate,” Selig explained, “I was bothered by the fact that he was campaigning on the High Holy Days — whether he was going to observe them or not.”

Sanders, the first serious Jewish contender for a major-party’s presidential nomination, is, in so many ways, straight from central casting. He looks like Larry David, pop culture’s go-to cranky old Jewish man, who plays Sanders on Saturday Night Live — and the two are actually distant cousins. His backstory tugs at all the Jewish heartstrings — Holocaust heritage, Brooklyn childhood that’s still audible in his accent, time spent on an Israeli kibbutz.

Yet, even among the 75% of American Jews who generally vote Democrat, support for Sanders seems little more than “meh.” With another critical round of primaries on Tuesday, Sanders faces increasing opposition from prominent Jews and Jewish groups, some saying they disagree with his leftist politics or fear he cannot beat President Trump — others saying they worry that a Sanders presidency could actually endanger Jews in both Israel and the United States.

“American Jews are extremely nervous that Bernie Sanders is doing to the U.S. Democratic party what Jeremy Corbyn did to the Labour Party,” said David Bernstein, chief executive of the Jewish Council for Public Affairs, referring to the British lawmaker whose rhetoric about Israel has alienated Jews. “And,” he added, “that we’re witnessing a hostile takeover of the Democratic party that would be inimical to Jewish interests and American interests.”

To be sure, Sanders has Jewish fans — in a Jan. 30 survey by the Pew Research Center, about 10% said they planned to vote for him. And that number could certainly rise now that the Democratic field has essentially narrowed to Sanders and former Vice President Joe Biden.

A Feb. 28 poll from the Jewish Electorate Institute, showed that Sanders is more popular among younger Jews: 68% of likely Jewish voters ages 30-39 have favorable views of him, as do 59% of those 18 to 29, compared to 48% of those over 40. Some of them lovingly refer to him as “Zeyde Bernie,” using a Yiddish word for grandpa — the phrase is “omnipresent” on Jewish Twitter, according to JTA’s millennial Website Hey Alma, and there are T-shirts.

“It hurts so badly when people try to erase Bernie’s Jewish identity because it looks a lot like mine,” one tearful young woman says in a video released last week by “Jews for Bernie” that features a circle of young Sanders supporters marking the end of the Sabbath.

On the other end of the spectrum sits Rabbi James Glazier, 67, who recently retired from Temple Sinai in South Burlington, Vt. Like Sanders, Glazier is a registered Independent who has voted Democrat. But if Sanders becomes the Democratic nominee, Glazier said in an interview, he plans to vote for President Trump.

“I certainly wouldn’t want Bernie to be the first Jewish president,” said Glazier, who joined more than 300 rabbis in signing an open letter to Sanders criticizing the senator’s decision to boycott the American Israel Public Affairs Committee’s recent policy conference.

“Why is it that all of the non-Jewish representatives and senators will go to AIPAC?” he asked. “That’s where Jews are!” he added. “Why is he uncomfortable talking to them?”

Joel Rubin, the Sanders campaign’s Jewish outreach director, defended his choice not to go to AIPAC, and noted that “American Jews express their pride in being Jewish in multiple ways.”

“Bernie seeks a world of justice, and as he has often said, his Jewish upbringing by immigrant parents shaped his understanding of the world and how he would like to fix it,” Rubin said in an email. “It is shameful for critics to imagine that they understand what’s in his heart. His actions to heal the world speak volumes.”

But some Jewish liberals see only cynicism when Sanders links his family’s Holocaust history to his desire to make the world a better place for everyone.

“I think he’s Jewish when he wants to use that as part of his platform, and that he is not Jewish when that’s convenient for him as well,” said Alex Halpern, 34, who works at an education nonprofit and lives in Southern California. “When he’s trying to gain support from people who are anti-Zionist or don’t believe in Israel’s policies.”

Indeed, one of the most common and harsh lines of critique of Sanders by Jews is for his willingness to criticize Israel and amplify the voices of people like Linda Sarsour and other supporters of the Boycott, Divestment and Sanctions movement against Israel.

Some are having nightmares of a Sanders administration stocked with Sarsour and others with similar views.

“It is unclear what he would do if he were elected,” said Hava Leipzig Holzhauer, 47, a lawyer who has advised the Florida Democratic party and been active in Jewish groups. “He wavers back and forth when talking about the issues, so that does give me concern about Israel’s security.”

Sanders has said that he supports the right of the Israeli people to live in peace and security, and Rubin the Jewish liaison, said in an email interview: “So will a Sanders administration.”

Susan George, like Selig, backed Sanders in 2016, and even served as a delegate for him at the national convention. But now she fears that a Sanders-led ticket would make her party less hospitable to Zionists and make Israel less of a bipartisan issue.

George, who is 65, said she has been told repeatedly by Sanders supporters to choose between the party and her support of Israel. She responded by co-founding a new group called Progressive Zionists of California — and by voting for Biden on Super Tuesday.

“I hung in there for quite a while,” she said.

“What Bernie is doing is speaking to the liberal Zionist vision of an Israel at peace with its Palestinian neighbors,” he said. “This is the best way for America to support Israel – by supporting its security through ending the occupation and fostering peace. Republicans may have given up on this Zionist vision, but Bernie has not.”

Mark Mellman, a political consultant who runs the group Democratic Majority for Israel, said Sanders has empowered anti-Semitism on the left by authorizing as surrogates people whose criticism of Israel has slipped into anti-Semitism. The group has run attack ads against Sanders, and on Monday endorsed Biden.

In an interview, Mellman cited as an example that Sarsour has said that the state of Israel is “built on the idea that Jews are supreme to everyone else,” and when his group asked Sanders to disavow the remarks, he didn’t.

Asked about this, Rubin, the campaign official, said: “Linda has explained those comments. Bernie has made his own views repeatedly clear.”

For all their increasingly vocal complaints about Sanders, though, most Jews — 65% according to the Jewish Electorate Institute poll — would vote for him in November if he becomes the Democratic nominee. That probably includes George, even if she has to hold her nose to do it.

“I think as a progressive Zionist and as a Democrat I would have to look at that very, very carefully,” she said. “I truly believe Trump has been a horrible danger to this country and Israel is being used as a wedge issue on the right and some of his remarks on Israel are deeply, deeply troubling. But it’s a hard choice. Speaking for myself, I would probably vote for Sanders.”

Jews will vote for Sanders against Trump, but many won’t like it. Why?