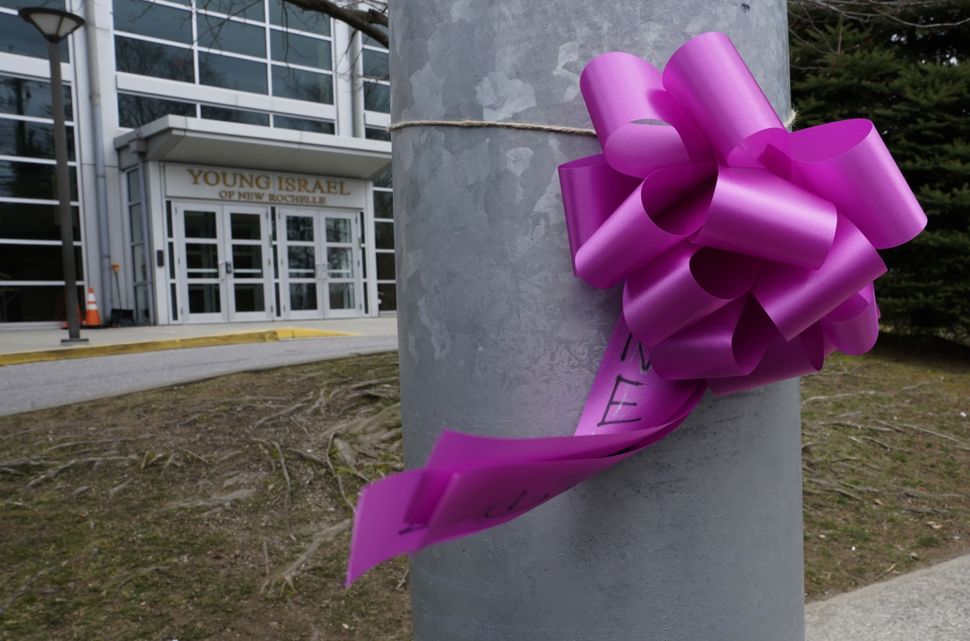 Patrick Vecchio was delivering kosher Chinese food to Jews quarantined in their homes in New Rochelle Tuesday afternoon when he heard the news: He was smack in the middle of the “containment zone” — a one-mile radius around an Orthodox synagogue in this New York suburb. Schools, places of worship and other large gathering areas in the zone will be shut down for two weeks starting Thursday to limit the spread of coronavirus.

Vecchio wouldn’t turn around; the food, from Eden Wok, was ordered by anonymous donors in celebration of the holiday Purim, and the deliveries were expected. He had 30 to go.

“This is ground zero,” he said.

The containment zone around Young Israel of New Rochelle is the nation’s most significant step thus far in limiting the spread of coronavirus. New York Gov. Andrew Cuomo said at a news conference on Tuesday that he would deploy National Guard units to the area Thursday to clean schools and deliver food to quarantined families, adding that testing kits will soon be made available in the area. Some 108 out of the 173 known Covid-19 in the state cases have been diagnosed in the suburb.

“New Rochelle, at this point, is probably the largest cluster of these cases in the United States,” Cuomo said.

New Rochelle is located in Westchester County, where around 17% of the population is Jewish, according to a 2011 study by UJA-Federation of New York. The spread of coronavirus began after Lawrence Garbuz, a lawyer, attended a bat mitzvah and a funeral in February at Young Israel, an Orthodox synagogue, potentially exposing hundreds of congregants to the virus. Jewish schools in Westchester with ties to the synagogue closed immediately as well, making this tight-knit Orthodox community the first to deal with the arrival of coronavirus in New York. 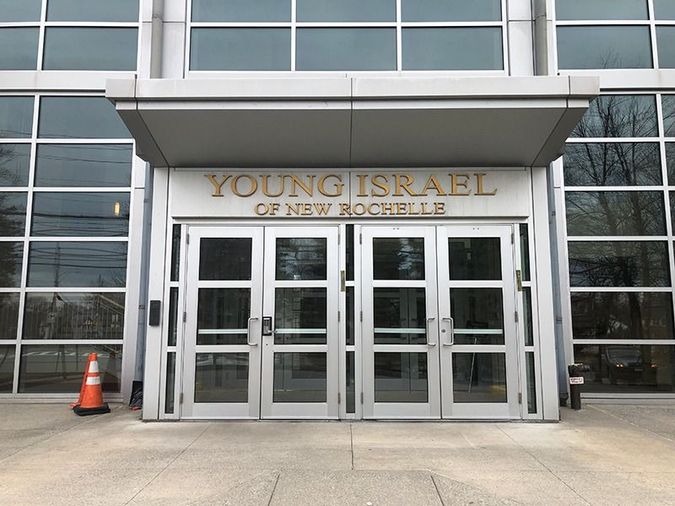 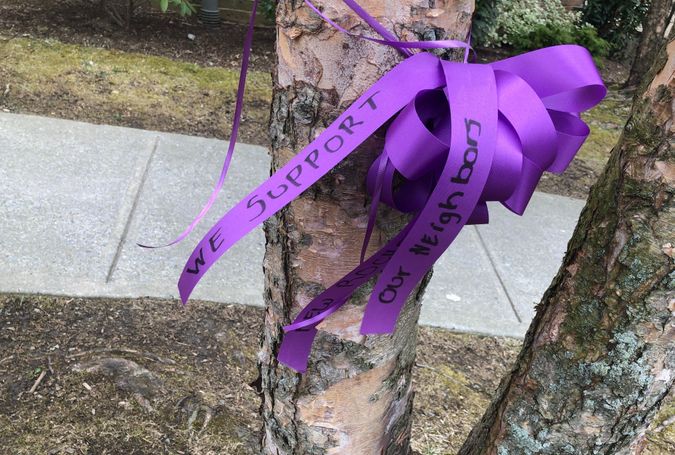 A ribbon tied to a tree in front of Young Israel of New Rochelle. Image by Ari Feldman

News of the containment zone landed unequally for residents and visitors here. People already under quarantine greeted the new restrictions with resignation, while those new to living with mandatory orders from the state Department of Health wondered just how much their lives would change, and how quickly.

A woman from Teaneck, N.J., was visiting New Rochelle on Tuesday with the daughter to deliver traditional Purim baskets of treats and baked goods called mishloach manot, when she heard about the containment. That the raucous holiday, in which Jews celebrate the foiling of a genocidal plot against them in ancient Persia, fell amid the coronavirus crisis is an obvious irony — it’s celebrated by dressing up in costume and wearing masks, just not medical ones.

“Normally, I wouldn’t even be the tiniest bit concerned,” said the woman, who spoke on the condition that she be identified only by her first name, Nikki, out of concern that she might be stigmatized for being in the containment area. “But we have four more stops. I hope they let me out.” 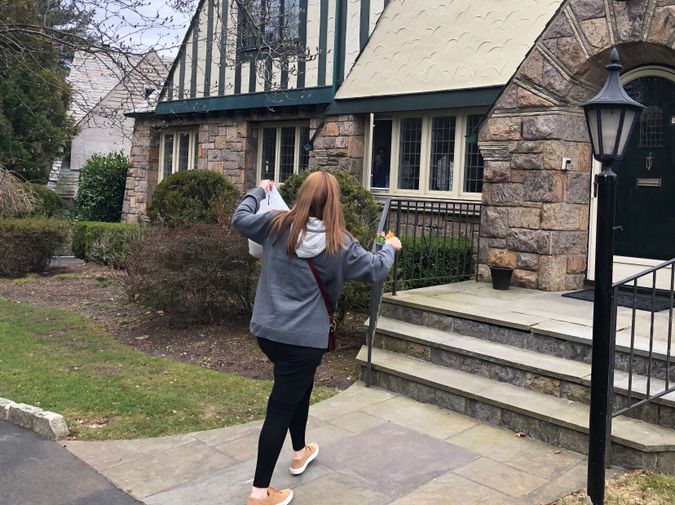 Gail Krasner, Nikki’s quarantined friend, was a little more pragmatic — and grateful for the goodie bag.

“We’ve been in our house for a week,” Krasner said. “Nobody’s gonna freak us out at this point.”

As a family, they’ve already grappled with cabin fever. Her children, who attend SAR High School, have been taking classes online. They spend time in their yard, and try to structure their days as much as possible to mitigate coronavirus-induced anxiety.

“All the other people, they’re worried it’s gonna come to them,” Krasner said. “We’re like, ‘It’s here.’”

The day did offer quarantined Jewish residents some of the humor associated with Purim. A gaggle of teenage yeshiva students made the rounds in the neighborhood around Young Israel, helping households fulfill the obligation of listening to the reading of the Book of Esther, the canonical text read aloud on the holiday.

Yaakov Yarmush, 16, did the honors at the first house, as the fastest reader in the group of the scroll’s 10 chapters.

How fast? “Under 20 minutes probably,” he said. 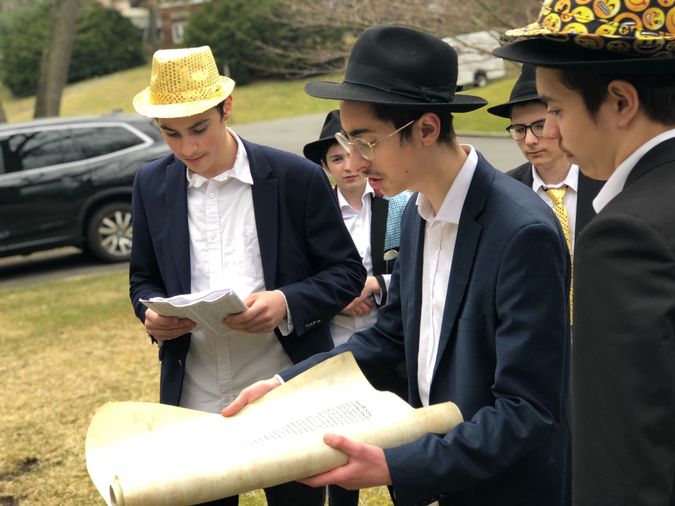 Speed-reading the megillah, the scroll of the story of Purim. Image by Ari Feldman

The teens, unfazed by news of the containment zone, stood about 30 feet from the entrance to a home on Trenor Drive, a posh suburban street near Young Israel, and read to a family of three sitting on their front steps. When Yarmush read the name of the Purim story villain, Haman, the boys and the family booed together, per tradition. Every fourth car or so slowed down to get a glimpse of the impromptu reading.

Lance Carr, clad in his Aladdin genie outfit (animated, not Will Smith) praised the boys for bringing Purim joy to dozens of families that couldn’t leave their homes to celebrate the holiday in synagogue.

“These boys have saved Purim,” he said. 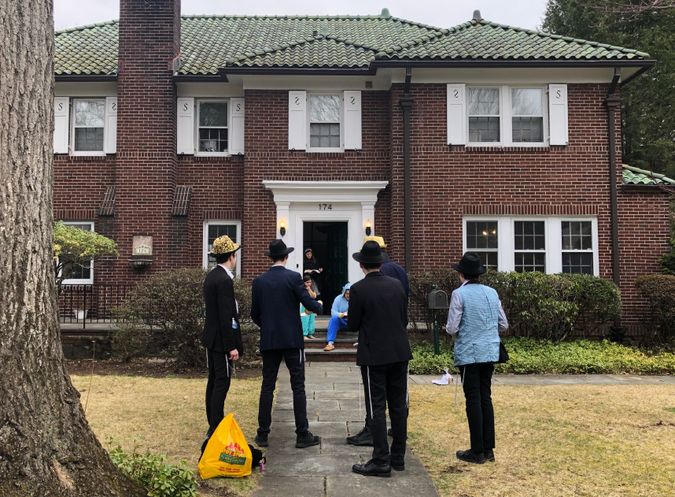 Reading the story of Purim to a captive audience. Image by Ari Feldman

At the business drag nearby the synagogue, news of the containment zone was spreading.

Outside Beth El Synagogue Center, a Conservative synagogue and school, there was no evidence of the usual after-school carpool rush. The Center had closed voluntarily after news of the infections at Young Israel. But two synagogue employees at the building, still trying to make sense of the unexpected containment news, said they didn’t yet know what it would mean for them.

Across North Avenue, changes were already in the works. Just after 3 p.m., employees of the Wells Fargo branch walked out of the back door. A sign in the window in English and Spanish directed customers to other nearby locations. The branch manager, locking the door behind him, said he could not comment.

“I thought they were gonna wait ‘til tomorrow morning, so people can live their lives,” said one woman who just missed the closing. “Thank God they made ATM.”

“José, can we come in or no?” she called to the branch manager. He apologized: The bank was closed. 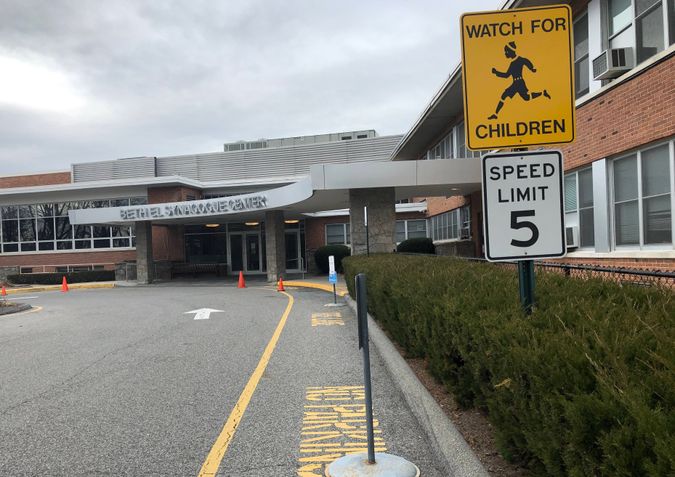 For small businesses in New Rochelle, the impact of the new containment zone is unclear, especially after a week and a half of decreased traffic due to self-quarantines. Restaurants, both kosher and not, are suffering, said Vecchio, the Chinese delivery man.

At the kosher Prime Time Cafe, where he works in addition to doing deliveries, they decided to keep the dining room open for sit-down meals.

“But no one’s coming in!” Vecchio said. “They’re staying away.”