The loneliest Shabbat: Bracing for another holy day in quarantine 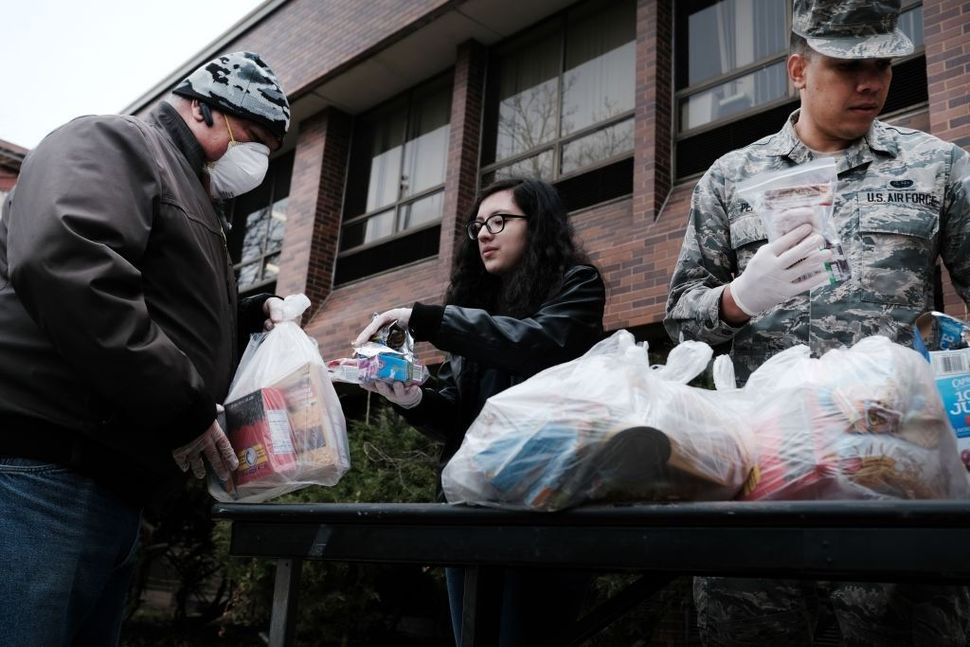 Members of the National Guard hand out bags of food to residents near a one-mile radius “containment area” set up to halt the Coronavirus (COVID-19) on March 12, 2020 in New Rochelle, New York. Image by Getty Images

Vera Koppel, 84-year old Holocaust survivor and resident of New Rochelle, is something of a local community organizer. She was born in Budapest, moved to the United States after the 1956 Hungarian revolution, and today is an active member of the Young Israel of New Rochelle, where she runs the “Ruach” weekly group for senior citizens, encouraging the town’s retirees to get out of the house for something other than a doctor’s appointment.

Shabbos — at synagogue, and with friends — is the pinnacle of her social life, and she misses it deeply. She spent last Shabbos at her house, alone. She’ll do the same for at least one more Shabbos.

“It was rotten to be home all of Shabbos, and on Purim, and it’s coming again and again,” she said. “As an Orthodox community, everybody’s social life is about having meals together. So it’s a shock for everybody.”

Koppel is in quarantine, lest she get or transmit the coronavirus. New Rochelle is the center of one of the country’s biggest outbreaks, and at a synagogue social event, Koppel sat next to the lawyer who was the first diagnosed case there.

As Orthodox Jews in New Rochelle, other Westchester County towns and in Bergen County, N.J. face a Shabbat in which they can’t go to synagogue or do any of their normal ritual or social activities, they brace themselves for the unknown — and are sharing ideas about how to cope with the boredom and anxiety of living in isolation, when technology is forbidden.

“Shul is really where you see everyone,” says Shana Hoffman, a mental health counselor in Scarsdale, in Westchester County, whose husband is in quarantine. “On a regular week, when nothing is going on – shul is where everyone connects. You’re taking that piece out for a lot of people, it’s really difficult.”

The impact of the coronavirus on the Jewish community started March 3, when the lawyer was diagnosed and public health officials began to determine who else had been exposed to him and his family. Students of SAR Academy, congregants of Young Israel of New Rochelle — like Koppel. Now, there are 148 positive cases in Westchester, and parts of New Rochelle include a one-mile containment zone. Meanwhile, the state of New Jersey now has 23 cases, and on Thursday, a board of Orthodox rabbis in Bergen County ruled that in order to mitigate the spread of the virus, their entire community would need to stay at home until further notice — no synagogue services, no condolence calls, no playdates for children.

As of Thursday night, state and municipal officials across the country had begun to ban large gatherings as a preventative measure, and Jewish clergy were likewise shuttering synagogues in major Jewish centers like New York, but also in places with less exposure to the virus, like Michigan.

The word for synagogue in Hebrew, beit knesset, means a house of assembly — the essence of synagogue life is not so much the prayer as much as the communal gathering. Every Shabbos, the Orthodox Jewish communities gather to pray together in synagogue, with a minimum of ten men required for a minyan, the prayer quorum — and afterwards, often, to socialize at kiddush over food and drink.

Unlike in other faiths, which valorize solitary spiritual experiences, praying alone is considered less than ideal, particularly for men. Now, norms will have to change, as more and more New York area Orthodox rabbis call for “social distancing.” But the ripple effects will be far-reaching.

“The core of anxiety is uncertainty,” said Tamar Gordon, a behavioral psychologist who specializes in anxiety and lives in Riverdale, where schools have closed. “And the difficult thing here is there are so many things that are uncertain — most people are worried about coping with quarantine, juggling work, about supplies, economic change.”

Gordon pointed out that many parents in her community are frustrated by the daily changes of plan, of schools writing they’re open and then closing soon afterwards. “There’s an inability to plan, whether it’s ‘Will school be open?’ to ‘Can my parents come to me for Pesach?,’ ‘Should I stock up on pasta, or should I not before Pesach?’”

For clergy, there’s an added burden of emotional labor — performing triage on those suffering from anxiety about isolation. “People were calling me this past Friday or texting or emailing – what should I do, I’m worried, I have an elderly parent, I’ll be okay but I’m worried about her?’” said Rabbi Jonathan Morgenstern, of Young Israel of Scarsdale, where many community members are in quarantine. “The answer is: Stay home. Err on the side of caution, of public health.” He tells his congregants to be machmir on pikuach nefesh — to be stringent about the law of avoiding risks to one’s life.

“It’s important to note the difference between sadness and anxiety,” Gordon said. “One of the things that people get anxious about is starting to feel sad or lonely. If I get quarantined, how will I cope with that? And of course Shabbat makes that harder – you can’t FaceTime with your friends.”

But some are finding an opportunity in a Shabbos in quarantine to calm their nerves. Parents’ chat groups share ideas about activities for families in isolation — talent shows, food prep, card games — and discuss how to model calm for children.

“This is a great opportunity to get to know your kids as individuals without the stress of school and community and outside expectations on them, or you,” wrote Rena Kutner, a family therapist in the Five Towns, a large Orthodox Jewish community on Long Island.

Many are trying to focus on the opportunity to spend time with husbands and fathers, who often spend much of Shabbat in the synagogue. “A part of this past Shabbos in quarantine was awkward,” Hoffman said. She described how strange it was, to have her husband around at home on Friday night and Shabbat morning.

“But there was something really nice about it. There was nowhere to go. Just having a meal – and no one was running off to a friend’s or to nap. Because time sort of stops in this situation. There’s no schedule, there’s no ‘I have to take a nap before mincha’,” she said, referring to the afternoon prayer.

Rabbi Reuven Fink, the rabbi of Young Israel of New Rochelle who tested positive, described the quarantine experience in his letter to his community: “It can give us more time with our families,” he wrote. “Maybe that book that we never got around to reading can be read now. Maybe we always wanted to find time to learn Torah. We now have that opportunity. I can’t remember the last time I davened (prayed) without a minyan for shacharis [morning prayer]. But my davening this morning was much slower than usual.”

Morgenstern suggested that families take advantage of not going to synagogue, to pray together at home instead. “Instead of communal davening, we’ll have familial davening,” he said. “There’s something special about that, too — praying together as family units. We rarely do that.”

In the meantime, as communities gear up for another Shabbat in quarantine — whether mandatory or self-imposed, as Bergen County rabbis instituted today — community members are trying to help one another as much as possible before sunset tomorrow.

When congregants call Morgenstern, asking for advice about how to cope with the stress, he tells them to try to find something good to do. “Fill that anxiety, negativity, with goodness,” he said. “When there’s a spirit of negativity, panic, fill it with the spirit of giving, kindness, love, for someone else.”

And many communities are doing just that — trying to congregate online on weekdays and taking care of the vulnerable.

“Purim was very difficult, not to be able to go to the shul, especially for the children,” Koppel said, her voice breaking. “But on the other hand, my synagogue was enormously wonderful – they made Purim parties online. So all the families got dressed, sent their pictures in. Every day the rabbonim (rabbis) put up the shiurim (religious teachings) you can listen to. In some ways, it brought the community closer together than we ever were.” When a community member asked Koppel if she needed anything, she answered: “‘Yes, I’d like a new refrigerator.’”

She added, “I lived through the Holocaust, then the Hungarian revolution, and then I immigrated to this country. I’ll get through this, too.”

The loneliest Shabbat: Bracing for another holy day in quarantine