A Jewish Netflix for teens stuck at home, and more coronavirus content offerings 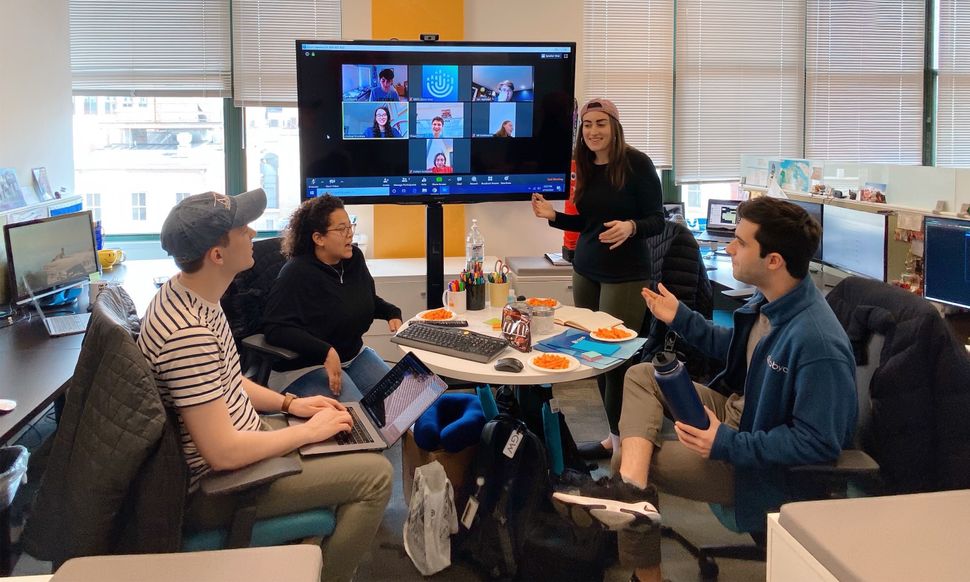 The BBYO On Demand team working Friday. Image by BBYO

The Jewish world is going online as schools, synagogues and Jewish community centers close down across the country in an effort to slow the spread of coronavirus. To keep Jewish learning and life alive for the next several months, clergy and educators are using what already exists on the internet or coming up with new programs.

“There’s this element of social isolation that’s gonna be more and more significant as time goes on,” said Daniel Libenson, who co-hosts Judaism Unbound, a podcast that in part explores the religion’s digital frontier. “People aren’t going to be able to talk to other people, especially about Jewish topics.”

Streaming is not new to the coronavirus. A few communities have already experimented with being entirely digital: There’s no building, just a website or a Facebook group where members log on to schmooze in video chats and participate in Passover seders via Zoom.

But organizations that have come late to digital programming, like synagogues that stream their services from only a single camera, or don’t do so at all, are going to have to work harder to help their congregations stay engaged with Jewish life — and sane — until life goes back to normal, Libenson said.

Here are the early efforts:

Libenson is hoping to launch an “online JCC” of adult classes, prayer services and programs next week.

The first major initiative is BBYO On Demand from the international youth group B’nai B’rith Youth Organization. Their slick site — built over just 10 days — will host hundreds, if not thousands, of live-streamed and pre-recorded classes, entertainment specials, games and discussions for Jewish teens.

As they saw major festivals like Austin’s South by Southwest cancelling for the year, the organization realized they would likely have to cancel hundreds of upcoming local, regional and international programs. They embraced a tech-industry attitude, making a platform and releasing it as quickly as they could, while continuing to find more partners for content and determining strategy as they went along.

“We basically built a Netflix in a week,” said Ian Kandel, BBYO’s vice president for global strategy. “This was not even an idea 10 days ago, and 10 days from now it will be very different.” 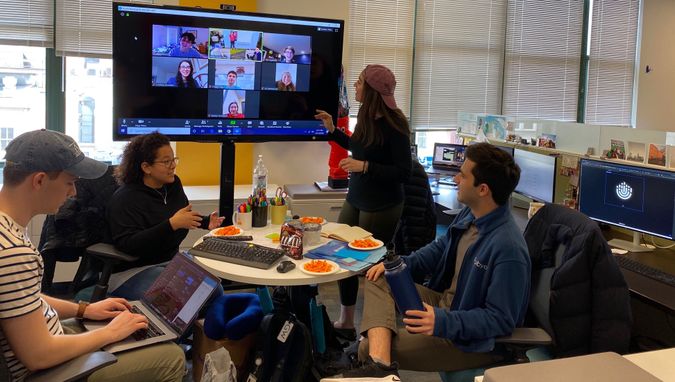 The BBYO Team working on Friday working in their Washington, D.C. office, fueled by cheesy poofs and M&Ms. Image by BBYO

The offerings offer a hint of what teenage — and general — Jewish life could look like, as mediated by screens. The scheduled programs offer hackathons, Talmud classes, birthday parties, study halls and chat rooms for the next episode of HBO’s Westworld.

“The culture is gonna move teens to screens, and that’s where we’re gonna be,” Kandel said.

The programs will be free, Kandel said, adding that he couldn’t offer a specific cost of building the site so far, but that it was relatively inexpensive, because they’re relying on cheap or free server software and are getting teachers, comedians, youth leaders and others to contribute content on a volunteer basis.

They’ve invited institutions from every part of the Jewish world to join their platform, Kandel said — they only were able to send out the invited in the last 24 hours, so it will depend on those groups when they begin scheduling programs.

There are other nascent efforts as well.

Nir Büchler, vice president of philanthropy for The Jewish Agency for Israel, launched a Facebook group Thursday night for taking virtual tours of Israel with licensed guides via Zoom video-conferencing software. The program, Büchler wrote in a post, is meant to help financially support Israeli tour guides as travel to Israel from outside countries has been shut down by its government. Friday, the group saw one tour: Zvi Geva, a licensed guide, gave a tour of the walls of the ancient Mediterranean port city Akko on a rainy afternoon. 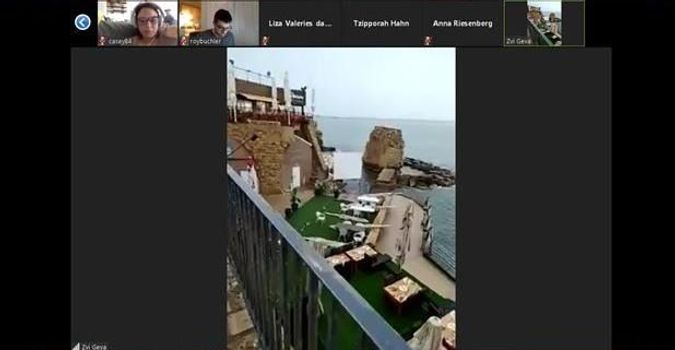 A screenshot of a beta testing tour of the walls of Akko, an ancient port city on Israel’s Mediterranean coast. Image by Facebook

Synagogues that already offer streaming are upping their offerings as well.

On Friday morning, Rabbi David Ingber, leader of Romemu, the non-denominational synagogue on Manhattan’s Upper West Side, prayed and meditated from his home via Facebook Live. His 45-minute session had more than 670 views, and drew scores of comments of support and thanks. At the close of his service, he read names of death anniversaries, or yartzeits, from congregants’ real-time comments — including the names of several people who have died from coronavirus.

Not all synagogues provide online services. Orthodox and Conservative Jews have rejected interpretations of Jewish law that allow for prayer services to happen via video-chat. Jews that observe this stricter interpretation of halakha will need to find a quorum of 10 fellow adults for a minyan in order to complete the full prayer service. And many synagogues have no ritual issues but have been slow to embrace the technology, seeing it as secondary to in-person events and prayer services, said Libenson.

Reform communities, and those that embrace technology in their sanctuary, have more leeway to offer flexible, isolation-friendly services.

At Temple Sholom, a Reform community outside Cincinnati, Rabbi Miriam Terlinchamp has been scrambling this week to prepare to be able to stream from wherever she is throughout the next weeks and months. Terlinchamp said that for communities to get used to streaming — and to create effective streaming content over the next months — they’re going to have to embrace the idea that getting congregants engaged online is just as important as engaging off-line.

“How do you not say, one is a higher value than the other?” she said. “That’s a cultural change.”

She’s working on her scripts — her Saturday morning services are broadcast online with PowerPoint presentations and preselected readings that congregants can access on their various screens — and scoping out new sets, like her living room.

“If you need help getting online, we’ll send you a millennial and a Kindle Fire,” she said. “This isn’t a doomsday approach. We were already ready for this.”

A Jewish Netflix for teens stuck at home, and more coronavirus content offerings