Throughout history, Jews have been on front lines of fighting disease

While the Nazi regime suppressed all reference to Jewish physician and chemist Paul Ehrlich, in the 1990s, he was featured on the German 200-mark bill. Image by Courtesy of Frank Heynick

As the coronavirus pandemic sweeps across countries and continents, scientists, physicians, and public-health officials deploy a combination of strategies to check its advance: quarantine, tests, restrictions on people’s movements, antiseptics. Meanwhile, in labs in the United States and abroad, not least in Israel, the race is on to develop an effective vaccine and antiviral drug based on proven scientific protocols.

In ages past, however, the reasoning and methodology for combating pestilences were, well, not quite so sound. The story of how we came to our present state of knowledge of the cause and spread of transmissible diseases and ways to combat them is one in which Jewish doctors played pivotal roles.

Of all the epidemics and pandemics that have ravaged humankind throughout history, the most devastating for Europe was the bubonic plague, also known as the Black Death, which swept away about a third of the population in the 1340s. There was no explaining how the scourge jumped from one city or village to another.

So, in time-honored fashion, the common folk blamed the Jews, accusing them of poisoning the wells. Christian mobs took to massacring as a “public health measure.” Jews in Cologne, Frankfurt, Speyer, Strasbourg and Basel were murdered by the thousands. Survivors fled eastward, taking with them their medieval German tongue, eventually known as Yiddish.

But the professors of the prestigious medical faculties of Paris and Montpellier, highly versed in the classical Greco-Roman theories, investigated the charge of well-poisoning and declared the Jews inculpable. The Black Death, they proclaimed, was due to an inauspicious alignment of the planets, causing earthquakes and the release of noxious vapors into the atmosphere.

Fast forward to the Netherlands in the 17th Century, a country of great tolerance. It welcomed the Jews driven out of Spain and Portugal [by the Inquisition], including renowned physicians, later joined by Ashkenazim fleeing persecution to the east. Not coincidentally, this was the Netherlands Golden Age, a time of breathtaking advances in the arts and sciences.

It was there that the first clue to the cause and spread of epidemic diseases was revealed. In the 1670s in the town of Delft, Antoni van Leeuwenhoek — a Calvinist — through the microscope he invented and discovered a veritable zoo of subvisible microorganisms previously inconceivable to even the most fevered imagination.

Throughout the 18th Century and well into the 19th, there was speculation about the possible relation of microorganisms to illness.

Could these tiny creatures, so primitive, come into being by themselves (“spontaneous generation”)? Were they the cause of disease or were they the product of the diseased body? Could a pathogenic microbe of one disease transform into that of another disease? In diseases known to be infectious, were microorganisms the culprits, transmitted from a sick body to a healthy one, there to germinate?

The 19th Century was a period of Jewish emancipation in the German lands as the old ghetto walls fell and Jews were able to participate in the scientific and cultural life of the wider society. They became innovators in many fields, particularly medicine. Jewish physicians had been held in awe for centuries by the gentile population. But even the great Maimonides had had no inkling of the world of subvisible life. Now, the newly emancipated Jewish medical men set about pioneering the germ theory.

In 1840, the Bavarian medical doctor Jacob Henle, descendent of rabbis, published his ”Pathological Researches.” Using technologically advanced microscopes and deductive analysis of case histories, Henle declared to the medical world: “Contagion is matter endowed with individual life which reproduces itself in the manner of animals and plants, which can multiply by assimilating organic material and can exist parasitically on the sick body.”

A year later, Dr. Robert Remak, a Polish-German Jew, published the first of his observations that cells – of any living organism including microbes – can arise only by division of parent cells. Thus Remak helped put to rest the concept of spontaneous generation.

Humankind’s war against transmittable diseases accelerated rapidly in the second half of the 19th Century. In the German city of Breslau (today Wrocław, Poland) the botanist-microscopist Dr. Ferdinand Cohn published in 1872 his “Bacteria, the Smallest Living Organisms.” As the undisputed master of the classification of subvisible life, Cohn elucidated that, while a microorganism of one disease may undergo various transformations, it remained the microorganism of that specific disease and not of another. 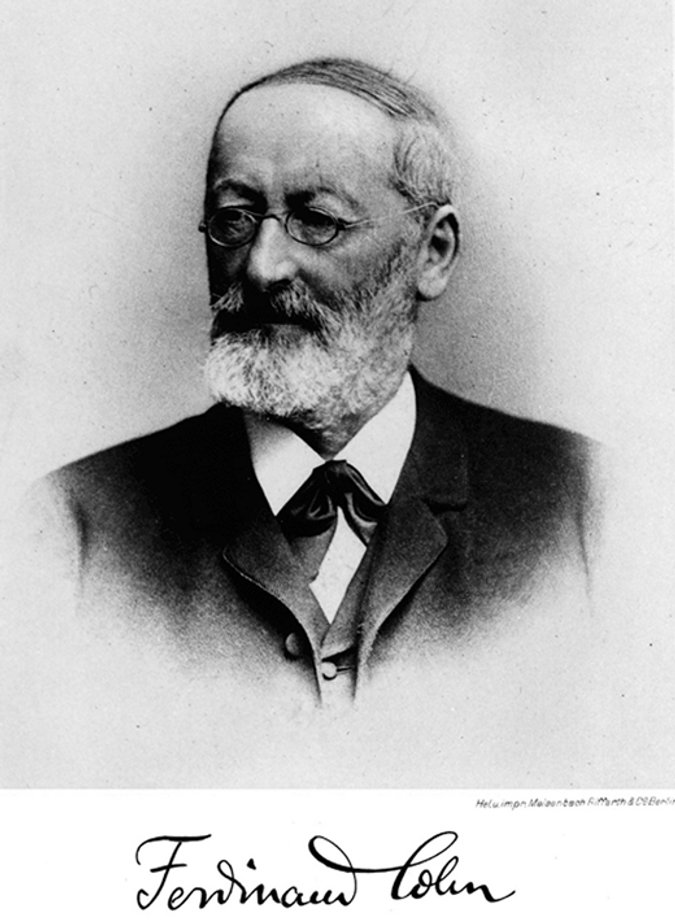 Robert Koch, a gentile student of Henle and protégé of Cohn, discovered the tuberculosis bacterium and revealed the mysterious life cycle of the anthrax bacillus.

Such dramatic advances led to the discovery of links in the chain by which the various pathogenic microorganisms are transmitted: cholera by drinking water contaminated by sewage, sleeping sickness by the tsetse fly, childbed fever by the contaminated hands of doctors and midwives, malaria (literally ‘bad air’ in Italian) by mosquitoes. And the rat-borne fleas of the Black Death. This led to countermeasures, such as improved sanitation, insecticides, and antiseptic and aseptic techniques.

To such defensive measures were added an arsenal of aggressive weapons. In the 1890s, the Jewish doctor Paul Ehrlich was instrumental in developing serums. The watery part of the blood (after coagulation) of an animal that has fought off a toxin-producing disease such as diphtheria contains powerful anti-toxins, which can be injected into a diphtheria patient.

A brilliant and imaginative chemist, Ehrlich pioneered techniques for selectively staining specific microorganisms to distinguish them under the microscope. This principle inspired him to develop the world’s first chemotherapeutic agent – the arsenical compound Salvarsan, dubbed by him the “magic bullet” – which homed in on and destroyed the spirochetes of syphilis. Ehrlich’s coreligionist Albert Wassermann developed the blood test for asymptomatic carriers of the disease.

With the combination of defensive measures and offensive assaults on infectious diseases, a general optimism prevailed as the 20th century dawned that humankind would soon be free of all these age-old scourges. Indeed, by mid-century, Jewish scientists would be awarded the Nobel Prize for developing penicillin and the antibiotic streptomycin – the latter effective against the bacteria of the bubonic plague.

But there was a missing piece to the puzzle: Viruses. Hundreds of times smaller than a bacterium, they would not be seen by a human eye until the invention of the electron microscope in the 1930s. And only later would their nature be revealed: not true living organisms capable of reproducing on their own, but packets of genetic material – DNA or RNA – which penetrate, commandeer, and destroy living cells in order to multiply.

This lack of knowledge had not, however, stopped the English physician Edward Jenner from developing in the late 18th Century a vaccine (from Latin ‘vacca,’ cow) to deliberately inoculate people with the pus of relatively benign cowpox and thereby activate their natural defenses to the far deadlier smallpox.

In the 1880s, the great French chemist Louis Pasteur, a devout Catholic, showed how inoculating a patient with pathogens such as rabies which have been killed or attenuated (weakened by drying or other techniques) similarly activated the natural immune system against a subsequent all-out attack by the fully virulent disease.

The principle of vaccination against viruses was continued around mid-20th century by the work of three Jewish doctors in the United States who took up arms against the dreaded crippler of children, polio. At the University of Pittsburgh, Dr. Jonas Salk developed a highly effective injectable vaccine using killed polio viruses. Hilary Koprowski created at Lederle Laboratories near New York the first oral vaccine, using attenuated viruses. It was developed to full effectiveness by Albert Sabin at the University of Cincinnati. (Newly severed foreskins of babies were used to cultivate the viruses.) 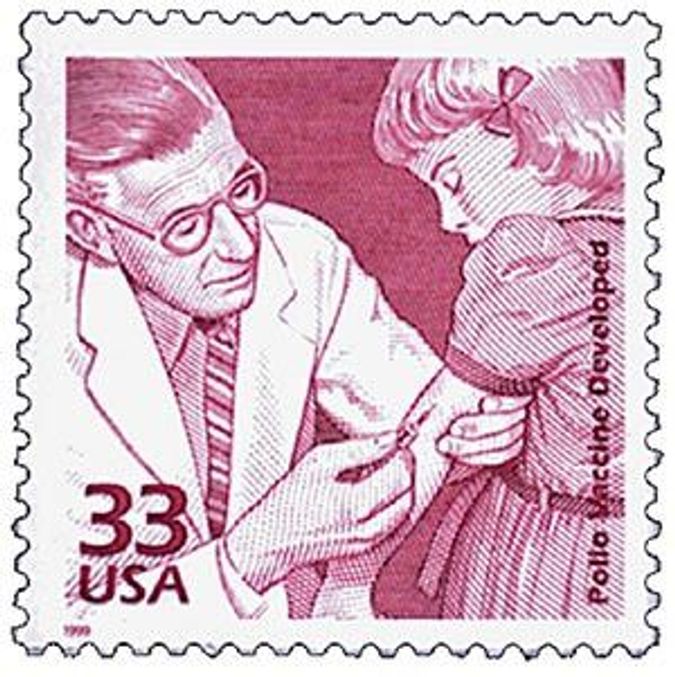 A stamp commemorating the polio vaccines developed by Jonas Salk and Albert Sabin. Image by Courtesy of Dr. Frank Heynick

They, like so many other American pioneers in medicine – including three dozen Nobel Prize winners – were descendants of Yiddish-speakers, whose “well-poisoning” forebears had fled hysterical mobs when the Black Death swept the Rhineland in the 14th Century.

Dr. Frank Heynick is the author of the 2002 book “Jews and Medicine: An Epic Saga.” A version of this article appeared last week in the Jewish Journal.

Throughout history, Jews have been on front lines of fighting disease