In Jewish Florida, the healthy and the young make it to polls on primary day 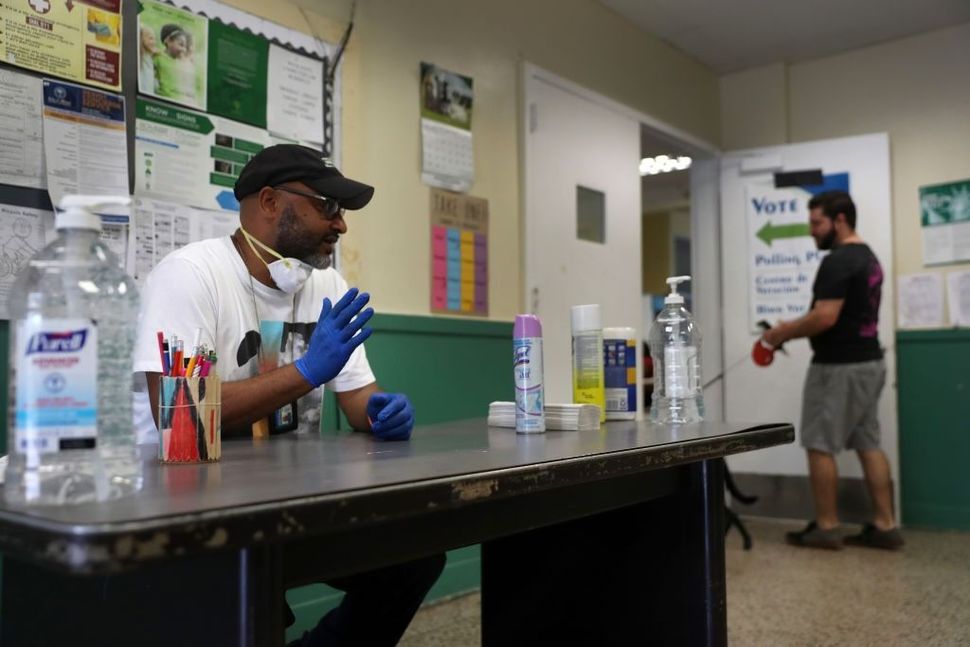 Voting precinct clerk Edgar Moore wears protective gloves and has a mask ready as people arrive to vote during the Florida presidential primary as the coronavirus pandemic continues on March 17, 2020 in Miami, Florida. Image by Joe Raedle/Getty Images

It’s primary day in Florida — a day that’s normally full of energy given the Sunshine State’s plum position as one of the most delegate-rich in the union. Instead, the coronavirus was like a mushroom cloud hanging over polling stations, leading many voters and some poll workers to stay home.

At my own polling station, a public high school not far from my house, the almost-empty parking lot told the story of no-shows. Poll workers standing at a comfortable distance seemed keen to greet me, reminding me of merchants in Jerusalem’s Old City after a terrorist incident: trying to appear calm, but clearly desperate for customers.

“Not even sure why we needed to do this today at all,” said one middle-aged woman, who said she’d worked the polls on election day for 30 years. “They could have postponed this. It’s not like there’s even a real contest at this point.”

Indeed, former Vice President Joe Biden has what is probably an insurmountable lead over Sen. Bernie Sanders nationally, and particularly in famously “purple” Florida. Biden has several elements working in his favor here, including Jewish voters, older voters and older Jewish voters. Now, of course, the question is whether coronavirus could depress turnout to the extent that it would affect the outcome.

“We walked right in this morning and did our duty,” said Rabbi Richard Polirer, 69, who is semi-retired and serves as the main Torah reader at Temple Anshei Shalom, a conservative synagogue in Delray Beach. He went to vote with his wife Suzanne — choosing Biden — and found they were outnumbered by poll workers. The risk, they decided, was no greater than going to the supermarket or the pharmacy.

“We minimize our exposure, we’re not symptomatic and we’re practicing social distancing,” he added.

Indeed, among Jewish voters, a reporter has to search far and wide to find vocal Sanders supporters. At one point, the leading Democratic candidate in Florida was Mike Bloomberg, who pulled out of the race on March 4 and soon threw his support and patronage to Biden.

Older voters also turn out in much higher numbers than do younger voters, who are the bedrock of Bernie’s support.

But older Americans and people with compromised immune systems are at the highest risk for getting dangerously ill if they catch the coronavirus, and that means many who might have come to their polling places today are staying home.

Inside my voting place, I presented my Florida license and spotted the box of disposable gloves on the desk. “You can take a pair if you want,” a poll worker named Michael Galvin told me. I decided to glove my right, voting hand (who knows where the pen attached to that voting booth has been?) but leave the other one as is. It seemed a fitting symbol of the political schizophrenia afflicting Florida’s leaders at the moment.

On the one hand, Gov. Ron DeSantis chose to go ahead with the primary whereas Ohio, a state with a smaller number of COVID-19 cases, postponed theirs at the last minute. On the other, DeSantis announced Tuesday that all universities in the state system would be online for the rest of the semester, there would be no commencement ceremonies, and that bars and nightclubs were about to be shuttered by 5 p.m. Tuesday — pouring icy cold water on already subdued plans for St. Patrick’s Day.

There has never been an election day like this in the memory of anyone alive today. America has been at war at different points over the last century and there were periods of turmoil during the Civil Right Movement, but it would be hard to find a time when choosing a candidate was truly a “vote at your own health risk” activity. One lawsuit filed Monday night by a coalition of racial justice organizations and five individual plaintiffs to force DeSantis to postpone the deadline for mail-in ballots due to the coronavirus, claiming that failure to do so violated their 14th Amendment right to equal protection. The pandemic’s upheaval was a cause of frustration for many people who otherwise would have voted but couldn’t, either because they were unable to travel, have compromised immunity or are in self-quarantine at home.

One of those is Steve Laskowitz, a Boca Raton resident who got off a cruise to the Caribbean last Saturday and had to go directly into 14-day quarantine, even though there are no known cases of COVID-19 from the ship he was on.

“I planned on voting today, but since I am potentially a carrier I will remain in isolation and root for Joe Biden instead. I plan on early voting from now on,” said Laskowitz, 72, a retired sales executive.

Had the vote been postponed – or at least extended for mail-ins – he would have been glad to make his voice heard. “That would have been nice, but I don’t think it would have made a significant difference.” Sanders reminds him, he says, of guys he knew in college decades ago: a little too radical for his tastes.

Younger Jews across Florida, however, especially college students and recent graduates, feel that the burgeoning health crisis points right to the man they were inspired by all along, which in some cases means, since high school: Bernie Sanders.

“Medicare for All is one of the most important issues for me,” said Sophie Rubin-Siegel, 22, a recent graduate of Florida Atlantic University who lives in Orlando and works for Genesis Global Recruiting.

“Lots of friends have health issues and are not insured, and with the coronavirus threatening us all, having healthcare is so important,” she said.

Rubin-Siegel, who graduated with a political science degree last May and was a leader of her College Democrats chapter, said that with so many postponements in voting nationwide and major metropolitan areas facing a virtual lockdown, Sanders’ candidacy still had a chance. “I think it’s going to be a very long race, and I think that the race could still go towards Bernie.”

His position on Israel doesn’t necessarily figure in the top issues that keep Jews in her generation up at night.

“I think everyone is a little scared of the future of health and he offers a solution, to which Jewish people and non-Jewish people can agree. And I think that is what will motivate voter turnout for him: that he offers a change from the norm.”

In Jewish Florida, the healthy and the young make it to polls on primary day