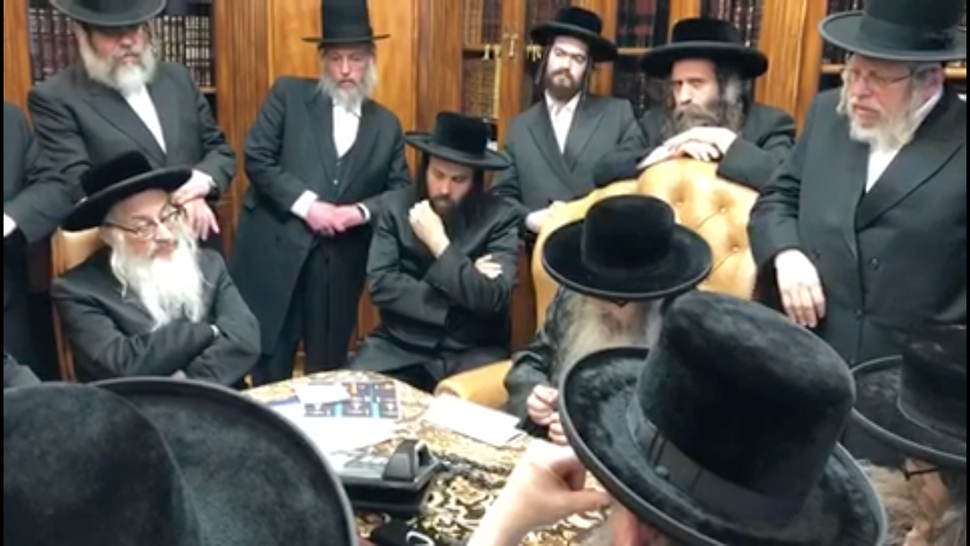 A screenshot of video sent to the Forward of Hasidic leaders on the phone with White House officials regarding the coronavirus outbreak. Image by Molly Boigon

An assistant to the president called on rabbis and leaders of the Orthodox community to help reduce gatherings of more than ten people to prevent the spread of coronavirus, according to video and audio recordings sent to the Forward.

Religious leaders asked questions on Tuesday about how to safely hold minyanim, including having them outside, but the White House advised caution.

Last night the White House held a call with Hasidic leaders. Today, most of the community has closed down. https://t.co/E89dEA1avX pic.twitter.com/Scsw5aixea

Berkowitz was joined on the call by counsel for the president who was identified in the recordings only by his first name, Mitch, most likely Mitch Webber, associate counsel to the president.

On the call, at least 13 Hasidic leaders including the Grand Rabbi of Satmar Zalman Teitelbaum of Williamsburg, the brother of Rabbi Aaron Teitelbaum of Kiryas Joel, and Shmuel Schlaff, affiliated with Bobov 45, asked questions about holding minyanim outside and how people in the community can visit the mikvah.

“I have a very hard time imagining that the mikvahs will be kept sort of in a way that they can be sort of cleaned after each person goes there,” said Berkowitz. “It does seem to me that that would be a very big problem on its face.”

Berkowitz is Orthodox and grew up in Lawrence, Long Island. He studied at Yeshiva Kol Torah in Jerusalem, and met Jared Kushner during a pick-up basketball game during Passover when he was an undergraduate at Queens College.

Leaders were told on the 45-minute call that shuls and schools should be closed down. Following the call, shuls and yeshivas in Kiryas Joel and most yeshivas in New York City closed Tuesday afternoon.

More than 100 people have tested positive for coronavirus in Brooklyn’s heavily Orthodox Borough Park neighborhood, according to a local urgent care clinic.

“This really is a matter of pikuach nefesh and it could be very, very dangerous for the people that are most susceptible to it,” said Berkowitz. “So if we can avoid these social gatherings of more than ten people, I really, really advise, and the President of the United States advises, that they not happen.”