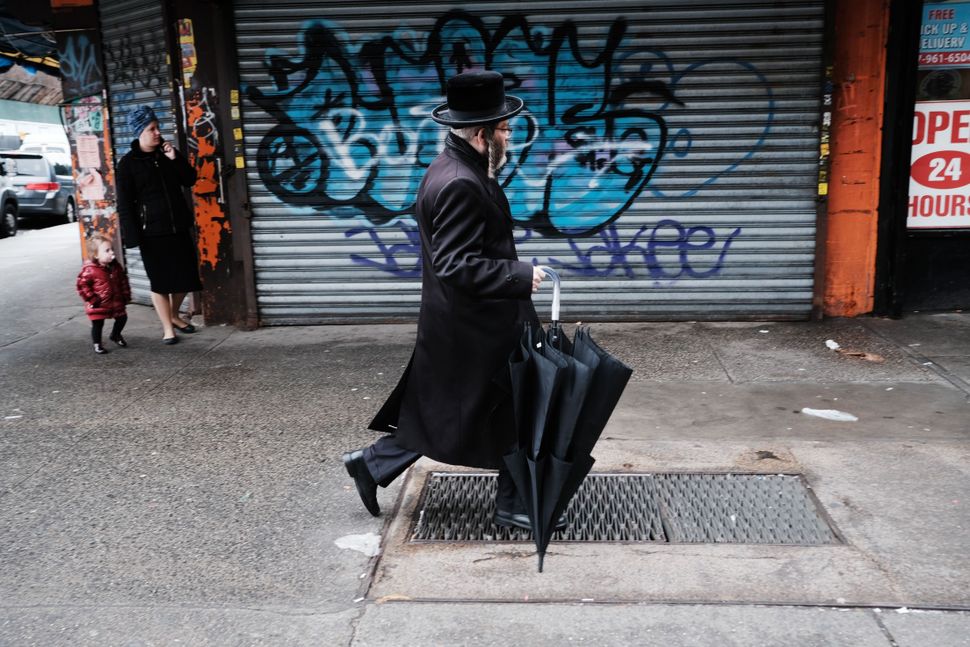 A man walks through Borough Park, in Brooklyn, where many stores have shuttered due to the coronavirus outbreak. Image by Getty

An urgent-care center that serves Hasidic neighborhoods in Brooklyn said Thursday that it has confirmed 528 cases of coronavirus among the 937 people it tested since last Friday, heightening concerns that infections in the highly social Hasidic world are spiking — and that the clinic’s aggressive approach could be helping it spread.

With test kits in short supply and being rationed across the country — and public-health officials holding medical facilities to strict standards for minimizing crowds — New York City’s Department of Health harshly criticized the clinic’s pop-up tent-based operation as “unauthorized.”

“Unnecessary outpatient testing puts New Yorkers’ health at risk,” Michael Lanza, a department spokesman, said in an emailed statement. “Testing should only be reserved for those most severely ill.”

Dr. Stuart Ditchek, a Brooklyn pediatrician who has been urging Orthodox institutions to shut their doors to limit the spread of the virus, said the tents used by the clinic, Asisa Urgent Care, and similar ones that cater to the Hasidic community, are likely themselves a source of new infections.

“They’re encouraging people to line up and walk into a situation that they may not be able to walk out of,” Ditchek said. “When you line people up like that, it’s in complete contradiction to social distancing. And if you have someone come in with a 103 fever and they’re coughing, they’ve just infected the whole tent.”

As a public service during this pandemic, the Forward is providing free, unlimited access to all coronavirus articles. If you’d like to support independent Jewish journalism, click here to make a donation.

John Lieberman, the chief executive of Asisa, said his clinic was unaware that it needed any authorization from the city to conduct testing, and that it had set up the outdoor sites rather than packing people indoors in order to minimize spread of the virus.

Lieberman also said that Asisa’s efforts to test as many symptomatic patients as possible had helped convince Hasidic Jews in and around New York of the need for extreme social distancing, after days in which they had flouted government admonitions and continued to gather for prayer, study and celebrations.

“By us doing this, we really saved a lot of lives,” he said in an interview Thursday. “By us doing the testing, it brought awareness to the community. This is why they decided all of a sudden to close the schools, close the shuls, and quarantine a lot of people.”

Lieberman said that the high rate of positives among the people tested — over 56% — was justification for doing the tests.

“Not to test is an injustice, because people can die,” he said. 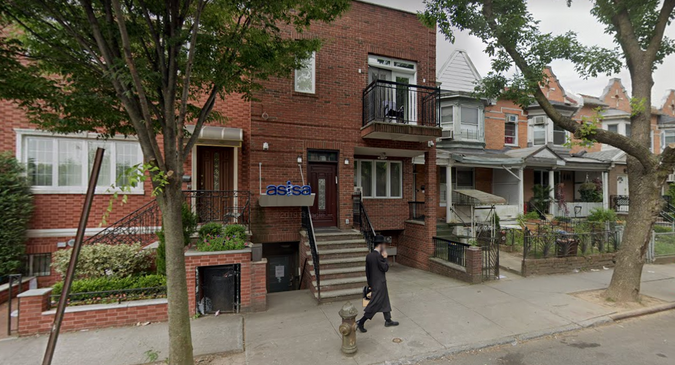 A screenshot of Google streetview of Asisa Urgent Care in Borough Park. Image by Molly Boigon

While countries like Singapore and South Korea have instituted blanket testing procedures in order to stem the spread of coronavirus, in the United States, many people reporting symptoms have struggled to get access to testing, even when they have been exposed to people who tested positive.

Asisa was able to conduct hundreds of tests over a few days because it had an outsize stock of the nasal-swab tubes required to perform the coronavirus test, Lieberman said. The tubes are used for a variety of common health tests, and because Asisa is an urgent-care facility whose three branches can see hundreds patients in a day, staff had hundreds of the tests in stock.

He said they got hundreds more in recent days from BioReference, the large New Jersey lab that conducted their coronavirus tests. “We give them the business, they give us the tubes,” Liberman said of the labs they work with. “We were prepared.”

BioReference is one of 28 private-testing facilities that New York State has contracted with, Gov. Andrew Cuomo announced March 13. Spokespeople for the company did not immediately respond to inquiries Thursday evening.

Asisa’s abundance of test kits is unusual. Health-care workers in hospitals and smaller private practices across the country have been complaining for weeks about a shortage of the swabs. Ditchek, the Brooklyn doctor, said his office has used four out of the six it had, and has been unable to order more.

He and other physicians said they had been following guidance from the Centers for Disease Control to only test those most severely ill, and to direct most patients to drive-through testing sites set up by government health workers to minimize contact between sick people and those who might not yet be infected.

“I have patients who have serious high risk conditions, and I can’t get Covid tests for them, because they’re very hard to access,” Ditchek said. “We’re turning away business because we need to prioritize saving lives.”

Video and photo images provided to the Forward show long lines out front of Asisa testing clinics, with no apparent division between symptomatic and asymptomatic patients. Patients do not appear to be standing six feet apart, as is recommended by the CDC.

In advertisements in online Orthodox news outlets, this week, Asisa said there were no appointments required to get tested.

“People who show symptoms, or have reason to be concerned that they may have COVID-19, are encouraged to visit any of the Asisa Urgent Care testing sites, and their professional staff will conduct a quick test,” the ad read.

In contrast, another local urgent care provider, CityMD, is “administering tests based on strict clinical criteria,” according to its Website,and requires that patients rule out seasonal flu before being administered a coronavirus test.

Yosef Hershkop, a regional manager for Kamin Health, an urgent-care company with a branch in Crown Heights, another Brooklyn neighborhood with a lot of Hasidic Jews, said the company’s medical advisers said not to offer widespread testing. The rationale, he said, was that it could risk the health of the staff by bringing sick people into their facilities; because many labs are at capacity for testing; and also because it could provide a false sense of the size of an outbreak compared to places with much more limited testing.

“There’s almost like no point, unless you can test everyone on a single block or one square mile,” Hershkop said, referencing geographically based blanket testing methods like those being used in Italy. 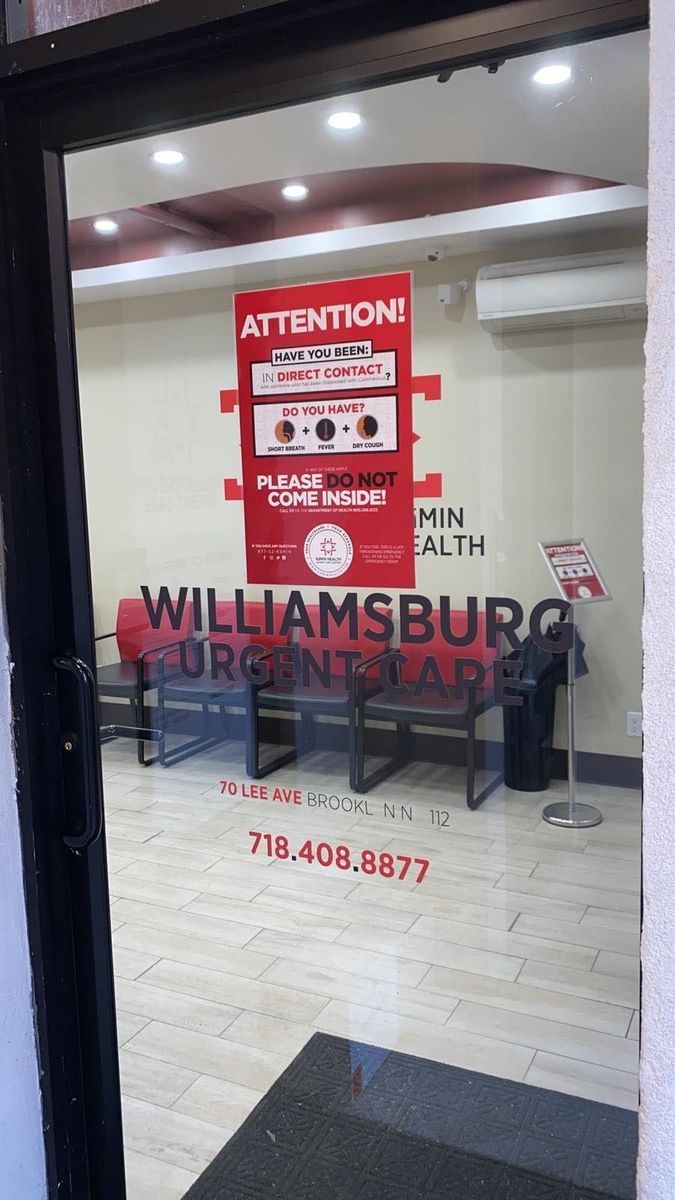 The door of a Kamin Health center in Williamsburg, urging clients to stay home if they have symptoms associated with the novel coronavirus. Image by Courtesy of Yossy Hershkop

That news jolted the region’s Hasidic communities, driving calls for an immediate and complete end to group activities, including daily prayer services and weddings.

But because coronavirus is beginning to spike across the city in general, some in the Hasidic world felt that reports on the Borough Park cases unfairly cast a harsh spotlight on them, creating the impression that Hasidic Jews are farther behind in following government guidelines for social distancing than they actually are.

There were immediate concerns about contextualizing Asisa’s data, because of the high volume of testing it was conducting relative to other health-care providers, and the fact that the tests were only being administered to self-selecting clients who came in because they had symptoms.

Avi Greenstein, the head of the Boro Park Jewish Community Council, said that the jump in cases reported by Asisa has led to vitriol against Hasidic Jews on social media, including accusations that they were spreading the virus at a higher rate by not taking necessary precautions.

“The haters pop out and they start saying all these vile, nasty things about this community,” Greenstein said. “It’s a direct result of this kind of misinformation.”

But Lieberman, who runs Asisa and is himself Hasidic, said he is afraid that the high infection rate his clinic has found does indicate the communities will be hit harder than others, if only because they are places where people gather in large groups frequently.

“Understand, you go to a wedding maybe every few weeks,” he said. “These people go to three a night,and there’s 700 people at each. Of course this community caught it way quicker, because they’re all together.”

As of Thursday afternoon, officials said there were 2,469 confirmed cases in New York City; the night before, Cuomo said on CNN that the state had processed 8,000 tests.

He also announced Wednesday that a hospital ship, the USNS Comfort, will be deployed to New York Harbor to help New York deal with a predicted hospital surge.

The clientele at Asisa’s three locations, in the heavily Orthodox neighborhoods of Williamsburg and Borough Park, are nearly all Hasidic. Asisa takes Medicaid, the insurance provider for a large number of Hasidic Jews, who tend to have low household incomes. (In New York, Medicaid covers households with incomes under $57,762 for a family with eight children, the average size of many Hasidic families.)

Lieberman said his clinic first looked into testing on Thursday, and that BioReference, with which it has a longstanding relationship, was ready to process swabs by Friday.

The test for coronavirus is a relatively simple procedure: a small swab inserted into the nostril to collect mucus, which is then inserted into a tube and sent to a lab. Lieberman said Asisa was down to its last 30 or 40 tubes on Thursday night, and would reserve them for the most vulnerable patients. He said the clinic was still waiting on results for about 130 tests.

Asisa set up three testing sites in tents in Borough Park and Williamsburg, and a fourth in Far Rockaway, Queens, in an Orthodox community it does not normally serve.