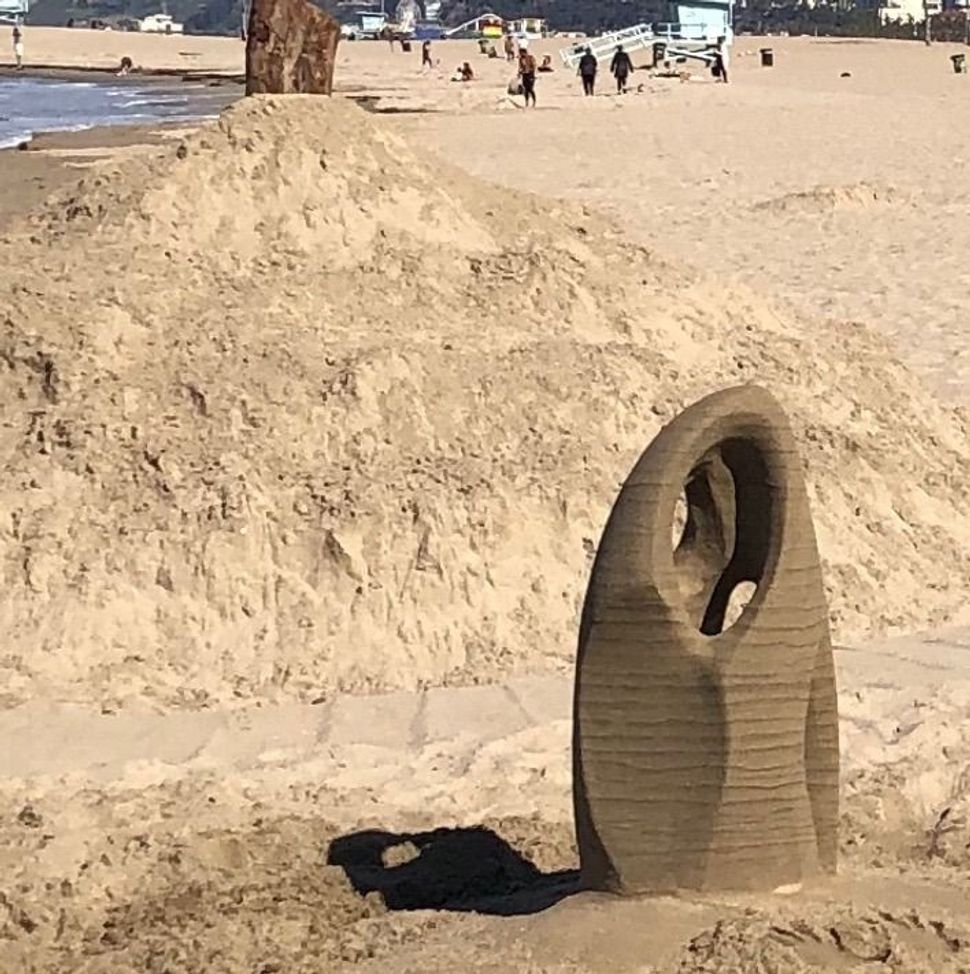 Three minutes after this photo was taken on Venice Beach, a wave came and washed the sculpture away. Image by Rob Eshman

The last time I spent Passover locked in a room I was 9 years old. My uncle refused to let me sit at the Seder table so long as I insisted on wearing a Mets cap instead of a yarmulke. To this day I’m not sure whether he exiled me because he was a stickler for tradition, or a Dodgers fan.

I didn’t really care then — I was definitely in my Wicked Child phase — but I do now. Up until last Saturday night, I assumed I’d be celebrating Passover as so many Jews are this year, via Zoom. It would be strange, but also novel, and — considering the hardships so many people around the world are facing right now — I was grateful to be able to do it at all.

I woke up, Zoomed with friends, made breakfast, and even sat for the first haircut I’d ever gotten from my wife. It was a gorgeous day in Los Angeles warm and clear. The quarantine meant I could stand in the middle of my street in Venice, a mile from the Pacific Ocean, and looking east, see a dab of snow on the peaks of the San Gabriels, 37 miles away. I spent an hour in the garden, pretty pleased with myself that I had planted early, and now had chard, kale and artichokes to get us through the horror show out there.

Then, I suddenly felt just a little less than perfect. No fever, no cough, no sore throat, just not fully myself. Any other time I would have powered through. Not now.

I self-isolated in my adult son’s old room, locked away from my daughter and wife, who has asthma. I pushed a chair up against the door, not to keep them from getting in, but to keep myself from reflexively going out. My wife knocked on the other door, the one that leads to the side yard. I swung it open to find not her but a plate of food she had left. If my doctor couldn’t be certain I was safe, I realized this was how I’d be spending the Seder.

I wouldn’t say I was scared, at least not for myself. I worried, and still do, much more about my friends and family who are far more vulnerable than me to the worst consequences of Covid-19. The word I’d use to describe how I felt isn’t scared, but humbled.

The social foundations we thought of as unchanging and permanent — commerce, jobs, restaurants, sports, celebrations — vanished in a flash. The freeways are so empty we’re nostalgic for traffic. The streets of the city where Hollywood was invented look like movie sets between shoots. Even some of the ubiquitous homeless encampments have disappeared, part of a too-little-too-late effort to protect the most vulnerable among us.

The only thing certain is death and taxes? Nope. Tax Day has been delayed, public funerals canceled and shivas moved to Zoom.

Just a day before my move into my son’s room, on a beach walk, I saw a man complete a sand sculpture, three feet tall, twisted and delicate. I stood far apart from him as we watched a single wave come in and sweep the sculpture away. It doesn’t get more metaphorical than that, I thought. Then, of course, they closed the beach.

Still, a part of me still saw this as something happening out there. Modern societies had made themselves vulnerable through bad choices, and, in some quarters, through willing ignorance and appalling incompetence.

Then came Sunday, and those tiny shifts from my body’s normal that sent me to this room. Yeah, the world can spin on a dime, but me? Me? Suddenly the humbling was my own. I was not Moses, thinking how I could lead others through this mess. I was Pharaoh.

“How long will you refuse to humble yourself before me?” God asks Pharaoh as plague after plague sweeps through Egypt.

The answer is: Not until the plague finally reaches Pharaoh’s home. Pharaoh is the Wicked Child, who also feels immune from the pain of others. And of course, both of them are us when we are not at our best, when we harden our hearts, when we assume we’re immune from the plagues of others .

“Has the night not gotten recently darker,” wrote the poet J. Allyn Rosser, “As if to insinuate that we have squandered/ The light that was there?”

Los Angeles, like everywhere else in the world, is plagued by darkness at night, stillness by day, poverty, hunger and this pestilence.

It’s been five days, and I haven’t developed a fever, cough or any symptom of the virus. I also haven’t left this room. And I know I’m one of the truly lucky ones.

Now I just stare out the window at my garden, hoping my doctor will tell me I’ve been spared, passed over. But for my own good, I hope the humbling remains. I hope it does for us all.