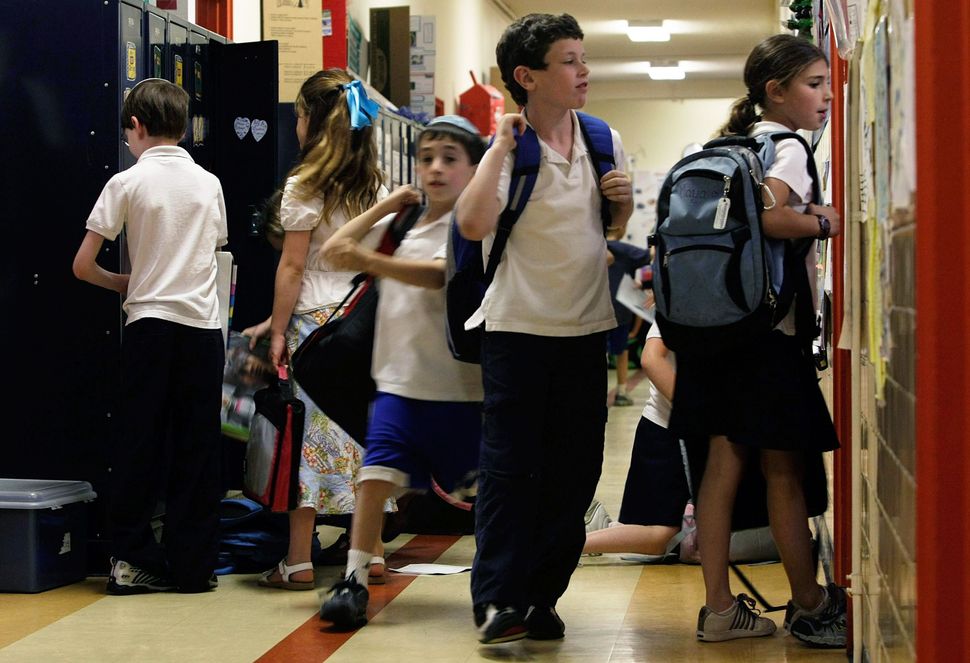 Students get ready to leave at the end of a school day at the Jewish Primary Day School May 27, 2008 in Washington, DC. Image by Alex Wong/Getty Images

Since the coronavirus outbreak, virtual cocktail parties between staff and parents have became a part of life at Charlotte Jewish Day School in North Carolina.

Almost 10% of the school’s families have already said they’re not sure they’ll be able to keep paying tuition, and staff members are trying to keep communication open and soothe some of the anxiety.

“They’re concerned, one, about the remainder of their payments for the rest of this year, and then, what are they going to do for next year? How long is this going to last?” said Gale Osborne, the school’s director of advancement, which is a fundraising role. “We have some families whose income has just stopped.”

Charlotte Jewish Day School is just one Jewish institution in the country grappling with a new reality wrought by the coronavirus crisis. Schools are transforming themselves into distance learning operations, and at the same time, they must contend with uncertainty about their financial health. Amid historic unemployment insurance claims, some parents might need help to pay for school. Others are weighing tuition costs against a laundry list of unknowns.

Because of the direct relationship between unemployment and tuition, schools are among the first Jewish organizations feeling the economic impact of the still-spreading virus.

Prizmah, the network for North American Jewish Day schools, puts the impact of coronavirus on Jewish day schools at up to $230 million next school year, said CEO Paul Bernstein said.

The diverse day school universe includes everything from Orthodox schools to pluralistic Montessori programs. Tuition ranges by school and even by family, depending on financial need, with some schools charging more than $30,000 per child. According to the most recent AVI CHAI Foundation census of Jewish days schools, the system is made up of 861 schools that serve 255,000 students.

Unemployment of this historically unprecedented intensity might affect even donors, whose own jobs or businesses could be hurt, and whose investments are being bruised by the contracting stock market. And schools aren’t the only nonprofit organizations seeking donors, foundations and federations for support; those that provide health services, food and employment assistance are doing the same.

Facilities are shuttered for the foreseeable future, maybe even through the summer when school buildings host camps that sometimes bring in half-a-million dollars, according to Susan Wachsstock, the chief program officer at the Jewish Education Project and a board member for the Westchester Day School.

Whether school buildings can open their doors this summer, she said, will be a huge factor in the financial health of day schools nationwide.

The concerns about cash flow highlight an already yawning divide between large, wealthy schools catering to substantial geographic Jewish populations and those serving smaller communities. The financial hit taken by reductions in enrollment might be fatal for smaller schools.

This is also a test of the school’s robustness and financial planning, Wachsstock said. Good nonprofit practice is to have three to six months of expenses in the bank in preparation for crises like these, and schools that don’t have that reserve could suffer.

“For schools, it’s incredibly incredibly hard,” she said. “But there’s definitely a universe of haves and have-nots in this conversation.”

It’s too soon to tell whether cash-strapped parents will un-enroll their children next year, or even if schools will open in person in September, but in the coming months, schools will begin to try to forecast families’ new scholarship needs, according to Wachsstock.

Many schools, including Charlotte Jewish Day School, are applying for relief through the Coronavirus Aid, Relief and Economic Security (CARES) Act, the stimulus package passed last week. Schools are eligible for payment through the portion that benefits small businesses.

According to a Jewish Federations of North America webinar Thursday, the funds can be used to pay for things like payroll expenses, mortgage interest, rent and utilities.

For its part, Charlotte Jewish Day School is preparing financial models for different scenarios — lower enrollment and more scholarships among them. They want to help parents as much as possible.

“We’re trying to tell them that we want to work with them,” said Osborne. “We’re committed to them as our Charlotte Jewish Day School family.”