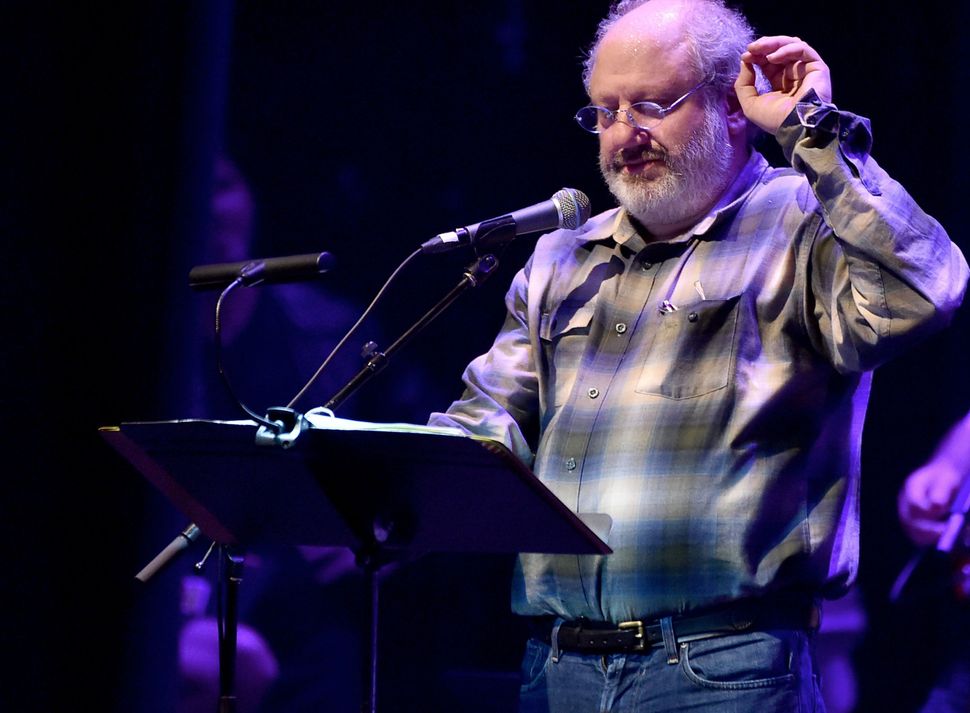 NEW YORK (JTA) — Hal Willner might have been the most willfully strange person in show business.

The music producer, who died April 7 at age 64 of complications of coronavirus, had a magic touch. He could get anyone to do anything: Tom Waits to sing an unrecognizable, railroad-rough version of “Heigh Ho” from Disney’s “Snow White”; R & B icon Macy Gray to deliver a sultry, gravelly take on the old sea shanty “Off to Sea Once More”; Leonard Cohen to jam out a jazz-inflected version of his “Who By Fire,” a take on the High Holidays prayer “Unetaneh Tokef,” with the exuberant tenor saxophonist Sonny Rollins.

While Willner had a far reach, and served as a longstanding producer for Lou Reed, the English singer Marianne Faithfull and the guitarist Bill Frisell among others, he was best known for his deeply surprising tribute albums.

Those included “Stay Awake: Various Interpretations of Music from Vintage Disney Films” — which featured Los Lobos, James Taylor, Sinéad O’Connor and Sun Ra alongside Waits — and “Rogue’s Gallery: Pirate Ballads, Sea Songs, and Chanteys” — with performers including Bono, Sting and Nick Cave — as well as albums dedicated to the composer Kurt Weill, jazz legends Thelonious Monk and Charles Mingus and, unexpectedly, the writers Edgar Allan Poe and William S. Burroughs. If there were other producers as eager to produce a live tribute to Shel Silverstein as an album by Sonic Youth, they were few and far between.

His voracious curiosity and supreme sense of fun reached their widest audience through “Saturday Night Live,” where Willner, a longtime collaborator of the show’s creator Lorne Michaels, oversaw the music that backed the skits since 1980. The cringe-inducing elevator jazz swoop at the opening of the iconic Andy Samberg-Justin Timberlake short “D***| in a Box”? The hold-music piano flourishes accompanying Adam Sandler’s recurring role as Operaman? The existentially upsetting combination of Haddaway’s “What is Love” with Will Ferrell and Chris Kattan’s eternal sideways head-bopping?

Willner’s influence was everywhere in the show, shaping its character — quirky, irreverent, intent on making absurd premises absurdly funny — through the seasons.

In many ways, particularly when it came to his absolute commitment to irreverence, Willner exemplified the ethos of postwar Jewish entertainment. His father, a Holocaust survivor, owned a Philadelphia delicatessen where Willner worked through his childhood. As he told The New York Times in 2017, his father’s tales of the concentration camps mixed with the Americana in which he was immersed to create an imagined world that was simultaneously dark and ludicrous.

“I remember having dreams, and it would be like Yosemite Sam was a guard at the camps,” he said.

When he moved to New York City to attend NYU in 1974, he found a world nearly as strange as that of his imagination: one where Redd Foxx introduced him to cocaine when he was 18, street fights served as entertainment and creativity ran wild, especially in the East Village, where he lived.

As it had been in his childhood, everything was serious, and everything was entertainment, an attitude Willner studiously applied to his work. In the end, there was no better example of his character as an artist than the unlikely Cohen-Rollins collaboration he engineered on the long-gone NBC show “Night Music,” another effort on which he worked with Lorne Michaels.

There was Leonard Cohen, singing a modern take on one of the most solemn prayers in the Jewish canon — wondering who will die this year, and how — and there, behind him, was Rollins, contorting ecstatically as he played gleeful, arcing riffs. The joy and the darkness, there in one, an unlikely and immensely moving pair.

This year, it was Willner’s untimely turn to go. With Cohen’s seriousness, we’ll mourn him. And with Rollins’ pleasure, we’ll remember all the gifts he gave us while he was here.