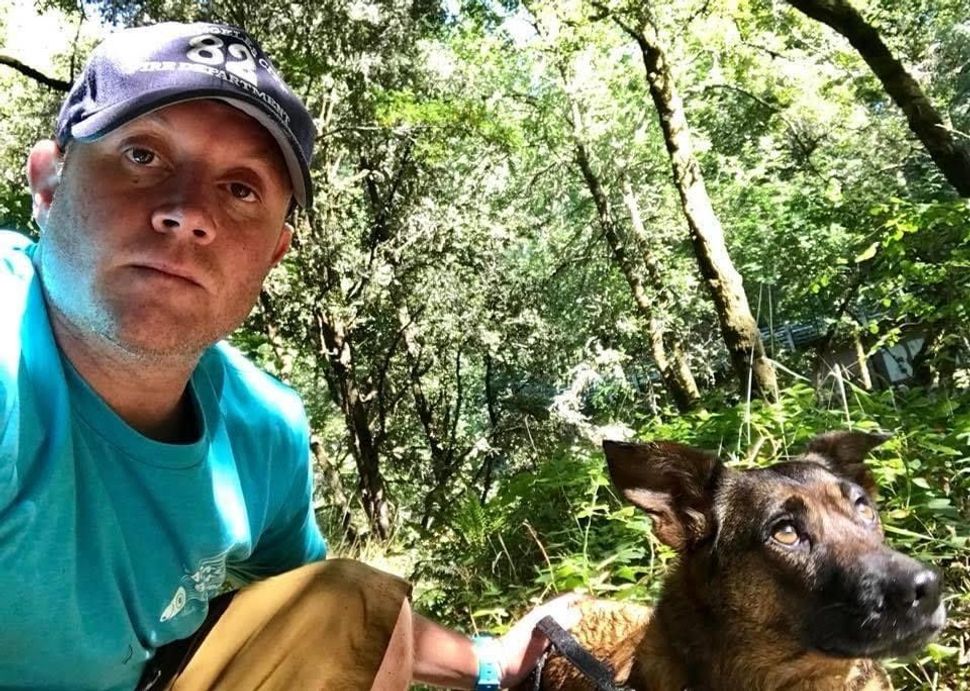 Three weeks ago, Aaron Jacobs, an Emergency Medical Technician with the San Francisco Fire Department, was dispatched to the Jewish Home for the Aged in San Francisco’s Mission District.

“We got a call from there, it’s a huge facility,” Jacobs said, “and they wanted this patient, a woman, evaluated for Coronavirus. She’d spiked a fever and developed shortness of breath as well. When we picked her up, she seemed to be in mild distress, with low-grade fever and we took her to the hospital.”

Jacobs hasn’t heard how the case turned out, but so far, he’s relieved.

“For me, it was an ‘Oh shit’ moment,” he said, “because if this bug gets into the Jewish Home, that’s going to be a huge problem. It’s an enormous facility with a lot of high-risk patients. I didn’t hear anything about the Jewish Home being a hotspot, so I assume she tested negative.”

Four days a week, from 1:30 PM to 1:30 AM, Jacobs, 41,works an intense, emergency-packed and potentially risky 12-hour shift on the front lines of the COVID-19 pandemic.

It was an unusual career move for a young Jewish man raised amid Hollywood glamour. Jacobs is the son of David Jacobs, a successful television writer/producer (“Dallas,” “Knots Landing”). He grew up in a spacious Hollywood Hills estate, very different from the homes in South L.A. that he entered during his ambulance work.

A dozen years ago, Jacobs was an avid snowboarder. “I loved back country snowboarding,” Jacobs said. “So I studied avalanche rescue, then I went further, taking first aid classes, and I got more and more interested in the medical side of it.” He became an EMT and started working on ambulances, usually in poverty-stricken parts of Los Angeles.

“While rendering aid, I met people in all walks of life,” Jacobs said, “in neighborhoods I’d never been in before, and in people’s homes. I liked that, and I also liked the pace of it, and the unpredictability of it.”

In 2015 Jacobs was hired by SFFD as an EMT. Since then he’s lived in Marin County with his dog, Janet. Instead of snowboarding, his hobby nowadays is learning how to grow different kinds of edible mushrooms.

Before COVID-19 became the focus of his work, Jacobs dealt mostly with the homeless as well as what he called “the opioid epidemic.”

“Until two months ago,” Jacobs said, “those were the battles that defined my career. Overdose after overdose after overdose, with no remedy in sight, and what concerns me is that, for one thing, that hasn’t gone away, right? We still have the opioid epidemic. And we still have the homeless, the most vulnerable part of our population. By definition, if you’re homeless, you can’t shelter in place. I would have liked to have finished those battles before starting this one. But that’s not the way it works.”

As if to underline Jacobs’s concern, on April 10 The New York Times reported that at a San Francisco homeless shelter, 70 residents had tested positive for COVID-18.

“We have some quarantine sites in the city,” Jacobs said, “mostly hotels that have been set up for people that have tested positive or [are] awaiting test results.” The first time that Jacobs and his partner were called to one of those quarantine sites, it felt “spooky.”

“You go into a hotel lobby, except everybody’s in PPE,” he said, using the now-well-known term for personal protective equipment. Sections of the lobby are taped off.Every ten feet there’s plastic sheeting with Velcro, and you walk through it and close the Velcro behind you, and you get to the person’s room, and there’s a nurse there. And the patient starts coughing, really working hard to breathe, so we get him on the gurney, put him on oxygen and take him to S.F. General

On April 6, in an article titled “The Great Unknown: How Many Health Care Workers Have Coronavirus?”, U.S. News and World Report pointed out that first responders — like Jacobs – have to deal with shortages of PPE. As a result of this and other factors, a large number of EMTs have been exposed, quarantined or infected by COVID-19.

“The most dangerous part,” Jacobs said, “is not when we’re near the patient, but when we’re taking off our equipment. You go on the assumption that the outside of what you’re wearing is coated with the virus. So if you take things off too quickly, or in the wrong order, then you’re going to stir it all up.For me, it’s all about moving carefully and being as educated as possible so that I can limit what I feel to rational fears and keep irrational fears at bay.”

“In this job,” saidJacobs, “there’s a lot of burnout, a lot of stress. Sometimes I think, ‘How long am I going to do this?’ Right now, at work, I feel that this is the kind of situation I’m well suited for. For me, knowing that I’m part of a solution, it’s really rewarding and all of the other kind of second thoughts, all that has kind of gone away.”

Roberto Loiederman has been a merchant seaman, kibbutz cook, journalist and TV scriptwriter. He is co-author of The Eagle Mutiny, a nonfiction account of the only mutiny on an American ship in modern times.