I went on Holocaust pilgrimage as an adult. A virtual March of the Living isn’t enough. 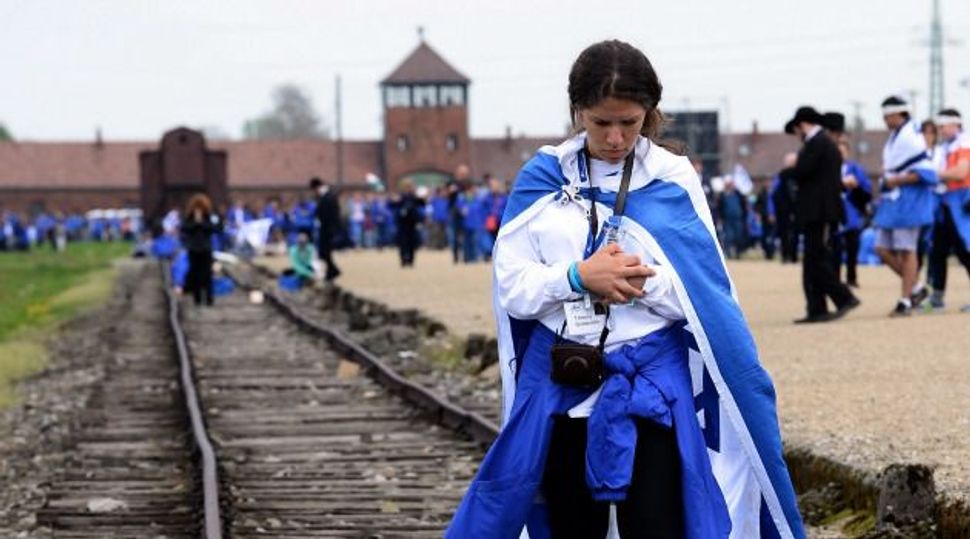 Don’t Forget: A woman participates in the March of the Living at Auschwitz. Grassroots Polish communities are coming up with new and innovative ways of remembering the Shoah. Image by getty images

Through the dark forest, my parents and I inched our way over rocks and twigs, to a clearing surrounded by a short fence edged with unlit candles and flowers, some fake, some wilting. My feet pressed into the spongy weeds as our group gathered to hum a niggun, then say Kaddish.

Huddled near my parents in the damp autumn night, it was not hard to conjure the last moments of the hundreds of Jews in this mass grave.

My parents and I were, in a way, lucky. We took our trip in November, before the coronavirus pandemic. We went, primarily, to connect more deeply to my grandparents, to pull aside the veil of mythology that surrounded their lives before and during the war.

As it turns out, we were part of a trend.

Since the 1990s, hundreds of thousands of teens have embarked on pilgrimages to Poland and Eastern Europe, most on March of the Living. In the last few years, many more adults have been taking these trips.

This year, 1,500 adults signed up for March of the Living — triple the number of adults who went in 2017. Now all of these plans have been swept into the wave of coronavirus cancellations.

March of the Living postponed its program a few weeks ago. Organizers are hoping to bring groups in November, around the anniversary of Kristallnacht, in addition to resuming the April 2021 march, if global travel is permissible by then.

Instead, this year March of the Living will hold a virtual ceremony with an April 21 broadcast featuring testimony from survivors and March of the Living alumni, addresses from Israeli President Reuven Rivlin and Holocaust scholars and activists, and a musical presentation.

But March of the Living organizers know that nothing can replace the experience of actually going — and I believe they’re right.

“You can read the books and you can watch the movies, but I think standing on the soil is the closest you can come today to imagining the unfathomable,” said Monise Neumann, who organizes and leads adult delegations for International March of the Living.

I came back from our seven-day tour of Poland devastated, astonished, even embarrassed, that in all my years of remembering and studying the Shoah – as the granddaughter of four survivors, a student of history, an author of books about survivors – I had somehow missed something. That it was so much worse than I ever allowed myself to think.

On our trip, which was not connected to March of the Living but followed an itinerary common on many of these journeys, we focused heavily on the Holocaust and tacked on one day to visit Sosnowiec, my grandmother’s hometown.

We visited three of Poland’s six death camps, mass graves in forests and mass graves in towns. We went to cemeteries in various states of disrepair, and shtetls with barely a trace of a Jewish heartbeat. At each stop, I wondered if I would be able to pull myself off the bus again.

Holocaust educators often focus on individual stories of victims or survivors, because students can relate more easily to one person than to an mind-boggling number like six million. In Poland, that distinction collapses. You see an emptied shtetl, a destroyed shul, a town square where 30 people were hanged, and you see both the individuals, and the six million.

More than anything else it did, my time in Poland disrupted my framing of the Holocaust as story of inspiration and survival – the living truth I saw in my grandparents’ resilience.

They lost so much. My maternal grandmother lost her son, five years old when he was killed. They all lost their parents, some of their siblings, their homes. Most of their 20s.

But my father’s parents, who escaped into Russia in the first weeks after Germany invaded Poland, met on the train to Siberia, and got married in a labor/prison camp. And as my mother’s Romanian parents wandered across Europe after the war, they came upon an abandoned Torah scroll. They carried the Torah with them onto a ship that got diverted to Cyprus. They arrived in pre-state Israel with my newborn mother, and the rescued Torah scroll.

For me, and for many descendants of survivors – indeed, for all of us who know the war primarily through survivors – our stories are of redemption and triumph. In Poland, you lose the filter of the survivors’ experience. You lose any sense of redemption or triumph. You see and feel just how much we lost.

While studies show that teens come back from March of the Living supercharged to fight against intolerance and for social justice, and that they commit themselves more strongly to Jewish living and to Israel, the impact of such experiences on adults is still to be studied. Neumann said she has witnessed adults — even Holocaust scholars and those who have been numerous times — internalize the trauma and come back as I did. Like the teens, determined to bear witness and to fight for a more just world. But also sadder, heavier, believing more strongly in an incurable, global, eternal anti-Semitism.

“Once you’ve been to these places, it becomes part of your DNA,” said Neumann, who has been on March of the Living 17 times, first leading teens for Los Angeles’ Bureau of Jewish Education, then adults.

She points to her experience in the Children’s Forest, where a mass grave holds 800 children who were taken from an orphanage and clubbed to death.

“You cannot virtually visit a site like this. Until you are standing there, you cannot understand how the trees, the birds talk to you. It is almost like you are coming there to tell the souls you did not forget them,” she said.

In Auschwitz, I walked between my parents on the train tracks, holding their hands as our ankles twisted on the stones between the ties. I saw the piles and piles of human hair harvested to make fabric, and wondered if my maternal great-grandmother’s hair was among them. She was around my age when she, my great-grandfather, and my grandmother’s five-year-old son were murdered there.

Standing inside the gas chamber at Majdanek, or looking at the unnaturally pleated grass that covers a field of bodies there, the depth of the hate seeped deep into my bones.

For the thousands of teens and adults who won’t travel to Poland this season, that is what they are missing. Throughout our tour, I anticipated something of a reprieve from the horror in our final day, which we would spend in Sosnowiec, a city of 120,000 just a half-hour from Auschwitz.

There, our young Polish guide, Tomasz, had used my research to locate the cobblestone lane where my grandmother’s apartment building once stood, her school, the spot of the shul where her father and brothers prayed.

And Tomasz found where my paternal grandmother likely used to ice skate, the Schön Palace, an old industrialist estate that was once surrounded by ponds, just across the river from her home. Ice skating, and owning her own skates, was one of the few positive memories of Poland my grandmother shared with us.

Now, standing with my parents in the shadow of the neo-Gothic mansion, I felt the wind blowing through my grandmother’s hair as she swooshed across the ice. I felt her cold cheeks as she paraded back up the cobblestone lane, her ice skates slung over her shoulder, looking for her mother in the third-floor window. Her mother was always waiting at the lace-covered window for her four children to return.

Of course, when my grandmother came back to Sosnowiec after the war, her mother was not there. The woman then living in the apartment refused to give my grandmother the needlepoint she herself had sewn.

My grandmother left Sosnowiec for the last time in 1946, never to return.

And then we went back.

We swallowed our nausea at stepping foot on soil my grandparents considered cursed, because we sensed that touching the place ourselves was the way to bridge the divide between their living memory and our mythology. No virtual visit, no museum or class or movie, could have done what standing there did. In the streets of Sosnowiec, I found my grandmother, no less inspiring than she had always been to me, but so much more real, carrying so much more heaviness than I had ever fathomed possible.

Standing on the scruffy lawn that now covers the ice skating pond, I held out my arms and kicked a leg behind me, just as she might have.

And I knew that my foot was coming back down on soil that is soaked in blood and scattered with ash.

Standing there, I saw — I felt — how she lived and what she lost.

I went on Holocaust pilgrimage as an adult. A virtual March of the Living isn’t enough.