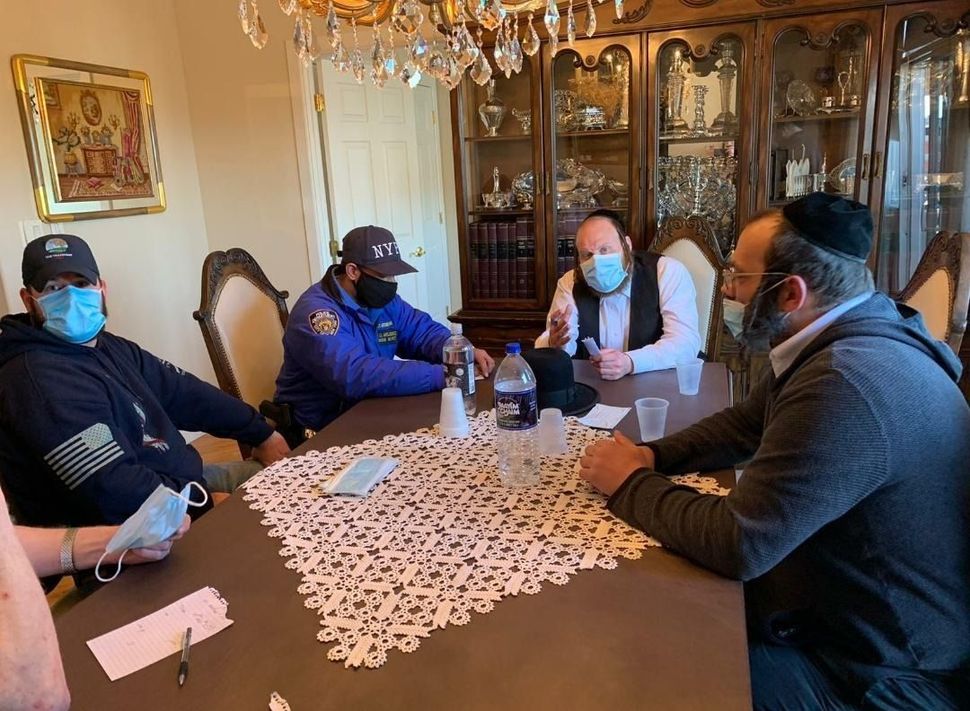 A meeting between local police officers and members of the Wiliamsburg Shomrim, at the home of a relative of Rabbi Chaim Mertz. Image by Source

De Blasio said he has been clear with religious Jews and everyone else that no gatherings will be tolerated until the pandemic has lifted its grip on the city. Yet the funeral attracted thousands of people, and raises questions about whether police have consistent guidance on how to address religious gatherings.

“It was strictly through NYPD’s permission,” said Moshe Weiser, a long-time liaison between police and the Hasidic community in Williamsburg, where the procession took place. “If they would say no, it would be no.”

The procession sought to honor Rabbi Chaim Mertz, a Satmar rabbi beloved for his deep piety and devotion to study — a traits he learned from his father Yechezkel Mertz, who with his wife survived World War II in Hungary before moving to America and founding Tolaas Yaakov. That’s the synagogue Chaim Mertz led until his death on Tuesday, at age 73, from COVID-19, according to Yitzchok Frankfurter, the publisher of the influential Orthodox magazine Ami, and a second-cousin of Mertz.

“He was dedicated 24/7 to serving God,” said Frankfurter. “It was a home of piety and nothing else.” 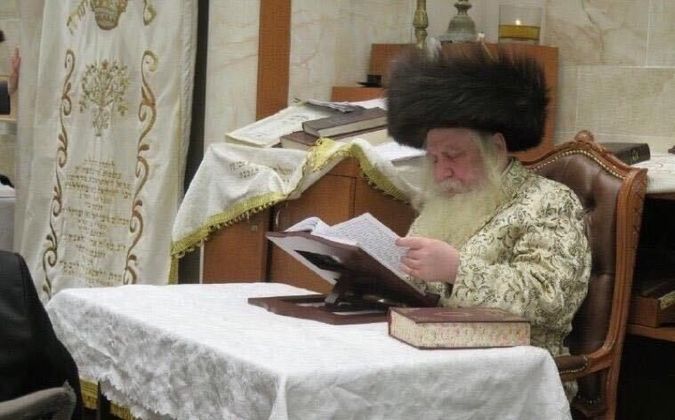 Chaim Mertz was a rarity among Satmar leaders: a prominent rabbi who didn’t involve himself in politics, building yeshivas or even the internal divisions of the community. Even after the Satmar group famously split in half in 2006, each faction led by a different son of the last lone Grand Rabbi, Mertz could be seen at weddings, bar mitzvahs and fundraiser dinners hosted by people on both sides. He presided over a small shul — a shtiebl — with standing room for at most 200 people. Under normal circumstances, his funeral would have drawn tens of thousands of mourners, said Yosef Rapaport, a Hasidic media consultant.

The funeral that occurred on Tuesday wasn’t nearly that big, and it only happened at all under the aegis of community liaison officers from the 90th Precinct, said multiple Satmar sources with knowledge of the plans. Former city council member David Greenfield said the same. Those officers have a close relationship with Hasidic leaders and the area’s Hasidic patrol group, the Shomrim.

The day he died, his family asked figures in Williamsburg’s Hasidic community who frequently deal with secular authorities — called askunim in Yiddish — to request from police, on their behalf, a short funeral procession. Weiser, the liaison, acted as the go-between.

The plan was to have the car bearing the casket proceed down six blocks of Bedford Avenue, one block at a time, ensuring that there would be few enough people on each block that they could maintain social distancing, according to a person familiar with the funeral preparations, who spoke only on condition of anonymity because he was not authorized to speak publicly. Shomrim and police set up barricades on the sidewalks, to keep bystanders from approaching the car ferrying the casket. Shomrim also handed out thousands of masks to people watching the procession, known as a levayah, or “escorting.”

A photograph obtained by the Forward shows two officers from the 90th precinct meeting on Tuesday afternoon with Shomrim members in the home of a relative of Mertz to plan the procession. Weiser said he was present at the meeting. The person with knowledge of the funeral procession plans said he was briefed on the meeting and recognized the Shomrim members. 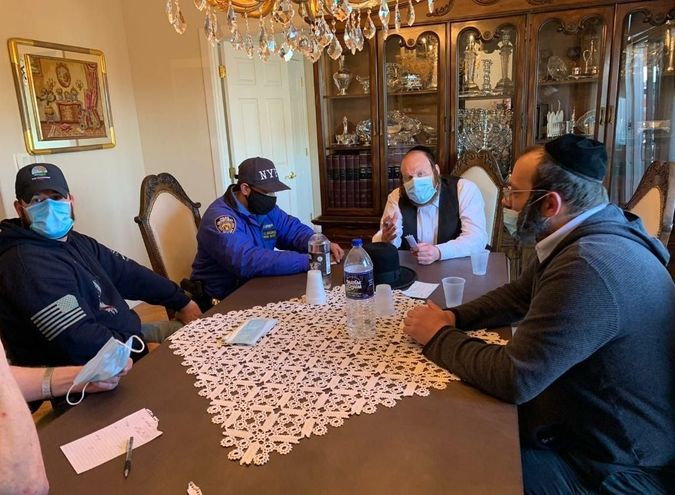 A meeting between local police officers and members of the Wiliamsburg Shomrim, at the home of a relative of Rabbi Chaim Mertz. Image by Source

The family arranged for loudspeakers to be set up along the street, so that people could listen from blocks away to eulogies made by the synagogue. But at the last minute, Weiser and others said, the police asked for the speakers to be taken down.

“Once there was no mic, it was very hard to do social distancing,” he said.

Dermot Shea, New York City police commissioner, said Wednesday morning that more officers were called in to break up the gathering, and ultimately 12 summonses were issued, both for violating social distancing warnings and for refusing to disperse. Video from the procession captured a chaotic scene, with police officers and Shomrim members trying to move the crowd away from the car carrying Mertz’s casket.

On Wednesday morning, however, de Blasio and Shea did not answer multiple questions posed to them at a press conference about whether police played a role in planning the procession.

“Everyone knows what is acceptable and what is not,” Shea said. “That event last night never should have happened, it will never happen again. You are putting my cops’ lives at risk, and it’s unacceptable.”

The NYPD declined to answer specific questions sent via email.

The messy break-up of the funeral procession is the latest incident in recent weeks to suggest that police are tacitly allowing “socially distanced” prayer gatherings in Hasidic neighborhoods. In Crown Heights, men have prayed almost daily in front of the Chabad movement’s headquarters, at 770 Eastern Parkway, with police looking on, sometimes calling via loudspeaker for men to move farther from one another.

In an email shared with the Forward, police officers from the precinct that oversees Borough Park — a densely Hasidic neighborhood in South Brooklyn — told a man reporting a violation of social distancing at a ritual bath that the Department’s Legal Bureau was reviewing federal guidance on distancing rules and religious observance.

The email referenced a statement issued by Attorney General William Barr on April 14, which said that “government may not impose special restrictions on religious activity that do not also apply to similar nonreligious activity.”

The NYPD has not responded to multiple requests for comment about the Department’s legal guidance for officers when responding to religious gatherings.

In response to the funeral, de Blasio said Wednesday that the city would no longer issue warnings for violations of social distancing, and would instead issue summonses and make arrests in some cases.

The incident left some feeling betrayed by de Blasio, who has longstanding, mutually-beneficial relationships with many ultra-Orthodox communities, including the Satmar. They voted for him for mayor, and some supported his short-lived presidential campaign.

“No matter how well-intentioned the Mayor might be, words that could be seized upon by bigots and anti-Semites must be avoided at all costs,” said Agudath Israel of America, a large Orthodox umbrella group, in a statement, which also backed up the de Blasio’s claims about the importance of social distancing.

And Mertz’s synagogue apologized, saying it recognized that de Blasio was reacting because of his concern for the health and safety of Jewish people.

“New Yorkers walk the streets daily, thus, a funeral – we thought – shouldn’t be different, as long the rules are followed,” the statement read. “Unfortunately, this didn’t pan out, and NYPD had to disperse the crowds.”