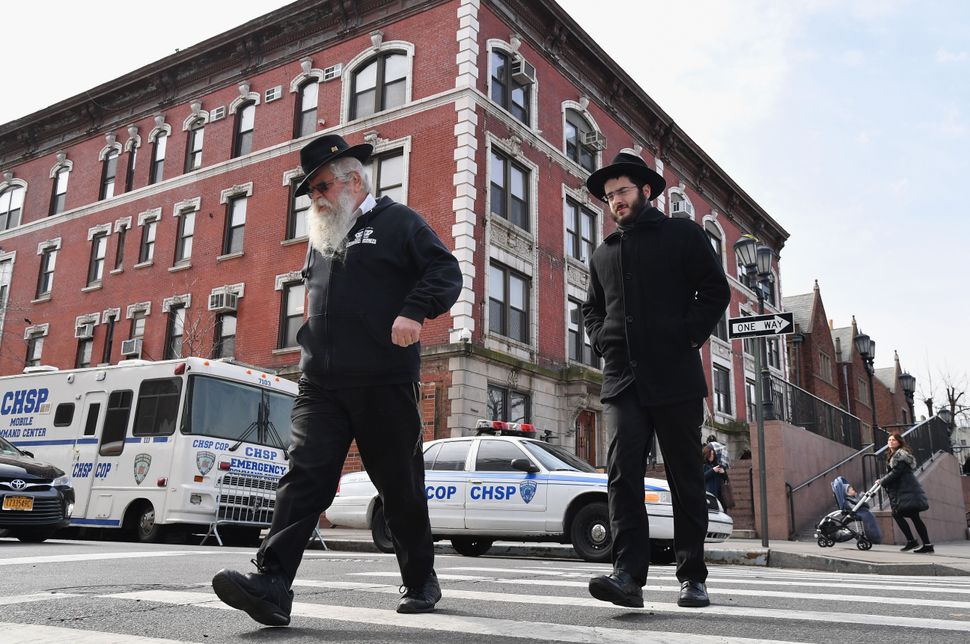 Men crossing the street in front of 770 Eastern Parkway, the iconic Chabad headquarters. Image by Getty

A gathering of young men in front of the Chabad movement’s Brooklyn headquarters led to a scuffle with police, who have been permitting prayer services there for a month despite the ban on gatherings amid the coronavirus pandemic.

The incident highlighted the attempts by law enforcement to balance the devout community’s spiritual needs with safety considerations, and local movement leaders’ struggle to control the behavior of a small number of young students who have not returned home to their families.

The stress of the pandemic and the imposition of new rules like social distancing and the wearing of masks has resulted in finger-pointing at groups considered lax in their observance the new of public health practices, from people playing basketball to Orthodox Jews, whose large families, small living spaces and high rates of interaction with each other have caused them to experience higher-than-average rates of coronavirus infection.

Chabad had shut the doors to its global spiritual hub at 770 Eastern Parkway on March 18 in deference to state rules prohibiting gatherings of any size. Yet since that date, police had allowed minyans, or prayer gatherings of more than 10 people, outside the building, on the condition that participants adhere to “social distancing” rules like standing six feet apart and wearing masks.

“The police are fine with it,” said Rabbi Eli Cohen, executive director of the Crown Heights Jewish Community Center, of the gatherings.

Community liaison officers for the 71st precinct declined to comment.

Those services happened mostly on the Jewish Sabbath — Friday night and Saturday — but on Thursday, April 16 a group of college-aged men came together to celebrate the end of Passover. Under normal circumstances, the doors to 770, as it’s called, are open wide, and thousands might come to sing and share a glass of wine.

On Thursday, one or two of the boys began to dance, spurring the police officers stationed in front of the building to intervene. That in return resulted in physical altercations that were caught on camera and posted to social media.

This is video of a fight tonight between hasidim and police as the NYPD tries to break up a Chabad prayer gathering at the movement’s main synagogue in Brooklyn at 770 Eastern Parkway held illegally in violation of the COVID-19 lockdown order. pic.twitter.com/oly6cdXn5Z

Then, one boy used what Cohen said was a stolen key to try and sneak into 770 to continue the ceremony, where he was met by building managers and eventually arrested for trespassing and assault. Two other boys were arrested and charged with resisting arrest, disorderly conduct and obstructing governmental administration, according to the New York Post.

In addition to the closing of 770 — for the first time in its 80-year history — Chabad has taken other measures to stem the spread of the novel coronavirus.

“We’ve been very clear about where we stand,” said Motti Seligson, director of media for Chabad, pointing to the complete shutdown of religious and educational institutions in Crown Heights. “If someone wants to hear it, they’ve heard it. If they don’t, there’s very little you can do.”

He said Chabad has been trying to work with police for weeks to ensure that there are no gatherings at all, even small ones.

The neighborhood’s Chabad-affiliated schools closed on March 13, two days before New York City announced it would close its public schools. While there have been high-profile funeral gatherings in Borough Park, and some ritual baths in Williamsburg have remained open, Crown Heights had held funeral processions by car, so mourners can watch from their windows, and men pray from their stoops or across backyard fences.

The students involved in both incidents Thursday evening are a group of the very few yeshiva students who came to live and study at 770 for the year who are still there despite the virus, according to Cohen.

“They’re kind of lost puppies right now, because they don’t have their school, don’t have their services,” said Cohen. But, all the same, he said, “They’ll have to deal with the justice system now. They were really out of hand.”

The young men also disrupted an unspoken compromise that police officers and the community had achieved over the past month. The prayer gatherings started out much larger: the Forward reported that at least 200 young men gathered in front of 770 on the day New York Gov. Andrew Cuomo announced a ban on nonessential gatherings on any size, some of whom said at the time that they were unaware of the ban or felt safer because they were not older or at higher risk of experiencing severe Covid-19 symptoms.

According Eitan Kalmowitz, a Crown Heights resident who attends the minyans, prayer leaders have made an effort to keep people six feet apart since that time, and sometimes the police do, too, using their loudspeakers to tell the men to create more space between one another. One minyan leader drew chalk circles on the sidewalk, to denote how far apart the men should stand.

Yet these norms had seemed to loosen over the recent Passover holiday. Last Wednesday, a Forward editor observed several dozen men, mostly in their twenties, attending morning and evening services in front of 770. Only some of the people present were standing six feet apart from one another, and not all were wearing masks.

According to records of 311 calls for complaints of people violating social distancing analyzed by the Forward, the area directly around 770 had police called to it three times between March 30 and April 15, out of more than 100 total calls for the period. The community board district for 770, Brooklyn’s 9th, which encompasses the southern half of Crown Heights, has the fourth-highest rate of social distancing complaint calls per capita in Brooklyn, after Williamsburg/Greenpoint, Bedford-Stuyvesant and Borough Park.

Kalmowitz said the services are safe, due to participants’ effort to maintain the mandated distance between them and because only young people — less vulnerable to the virus’ most serious effects — are supposed to come. He disputed the notion that coming together for prayer could be considered a nonessential gathering.

“Whether or not it falls within what the governor’s definition of essential is, certainly it’s within our constitutional rights,” Kalmowitz, 25, said.

Seligson, of Chabad, said that they have put posters in the area to discourage people from going, but they cannot control how individuals pray.

The boys who caused the incident Thursday night have been causing trouble for months, Cohen said.

They have repeatedly disrupted life inside 770, insisting on conducting services in the ways they were done when Rabbi Menachem Mendel Schneerson, the late spiritual leader of the movement, was alive — over 25 years ago — against the wishes of 770’s managers.

Cohen said that Chabad leaders in the area have made every attempt to keep them in line, and even barred some of them from entering 770 at all.

Cohen said he and others have tried “to find out who are their spiritual guides, who’s giving them direction, but it doesn’t seem that anyone has owned up to providing a theological ground for this. So it seems that it’s become a thing of its own.”