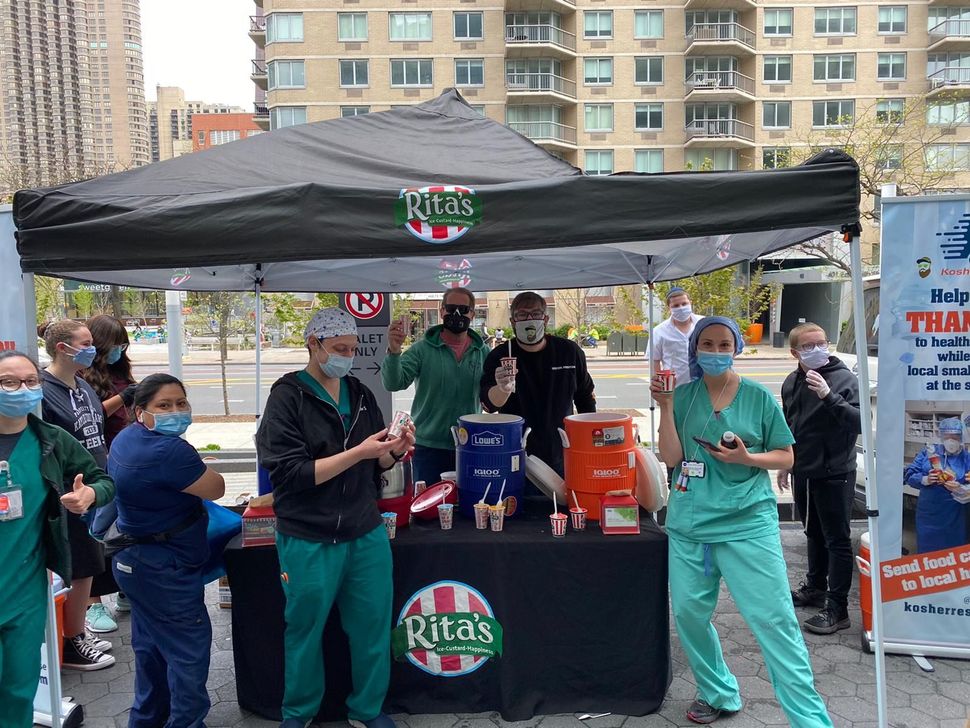 Boxer and other volunteers from Kosher Response hand out Rita’s water ice in honor of National Nurse’s Day. Image by Gabriel Boxer

Emerging from the hospital for the first time in hours, the nurse needed to talk to someone. A young woman, she’d trained hard for her career, with full knowledge that it would be a difficult one. What she hadn’t prepared for was saying the shema with dying coronavirus patients, comforting them through final moments that should have been shared with family and friends.

The only person there to listen was Gabriel Boxer, and the only thing he could do was hand over a cart full of sandwiches to tide her and her unit through a long night. But in the moment, that was enough.

Boxer, better known to his thousands of Instagram followers as the foodie Kosher Guru, has made hundreds of those deliveries. A fast-talking Long Islander with an encyclopedic knowledge of the kosher food scene in New York and its environs, he began his job as a deliveryman in late March, when he heard that a friend of a friend was working a long hospital shift without any access to kosher food.

“I literally went out to the supermarket, bought food, and delivered it to the hospital,” Boxer said.

He came home, posted about the day’s events, and was inundated with messages — from those looking to help and from anxious mothers, brothers, sisters-in-law and best friends hoping to arrange a delivery for a nurse beloved to them. Within a few days, Boxer found himself at the helm of Kosher Response, a sprawling grassroots effort bringing food to nurses and other front line workers in New York City and as far afield as Chicago and South Florida. 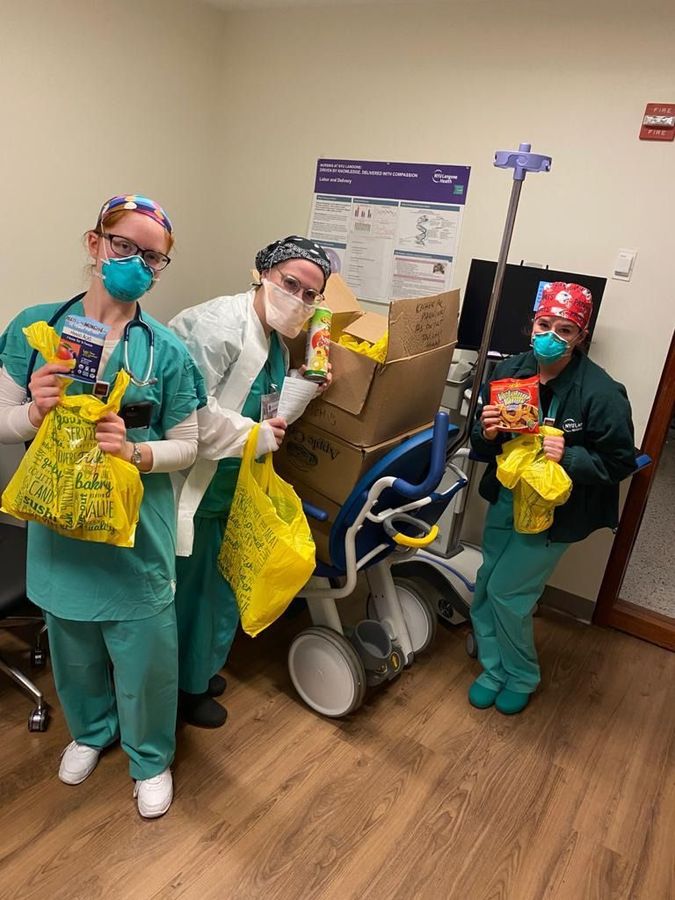 Nurses pose for a snap with snacks delivered by Kosher Response. Image by Gabriel Boxer

Each morning Boxer, whose regular work as a restaurant consultant has stalled because of the pandemic, evaluates the day’s requests alongside Miri Stern, a volunteer who’s become his “partner in crime.” After phoning in orders to restaurants, they package food for delivery in Stern’s garage and set off for the hospitals. At night, Boxer works on fundraising: he calls around his network, asking friends and colleagues if he can count on them for $18 or $36 to help.

Kosher Response serves Jews and non-Jews alike: anyone can make a request, and Boxer provides tries to provide food for the recipient to share with their entire team. But for Jewish nurses, many of whom have spent the latest chags on the hospital floor, Kosher Response has taken on the additional task of preserving some sense of ritual amid the pandemic. In one of its biggest initiatives to date, the organization delivered 3,400 kosher-for-Passover meals to personnel at New York City’s Javits Center, many of whom had arrived from out-of-town and had no idea where to find matzah in a city on lockdown. 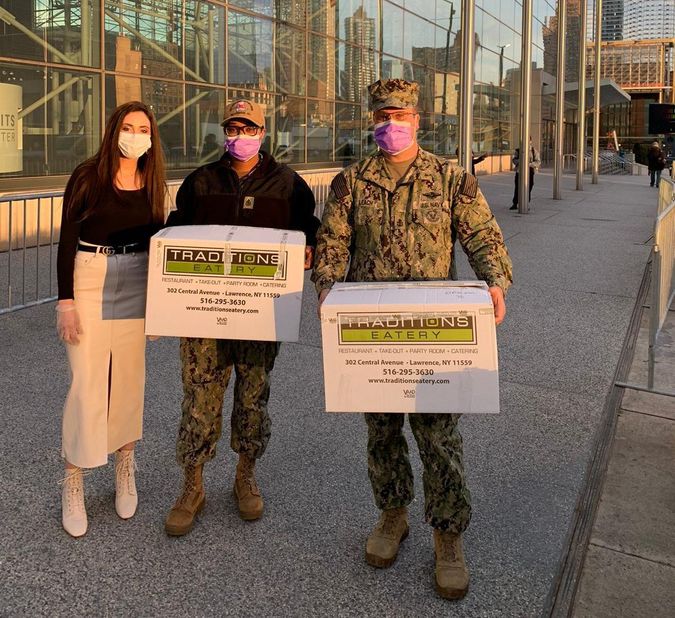 Now, Boxer coordinates with a glatt kosher caterer, Main Event-Mauzone, to deliver challah rolls, grape juice, and chicken to hospitals on Friday nights so that nurses can have a taste of Shabbat — even if it’s wolfed down on the way to a patient in need.

Boxer’s is only one of many grassroots efforts, within and outside the Jewish community, organizing with remarkable speed to feed those on the front lines of coronavirus. The widespread zeal to get sandwiches into the hands of nurses speaks to both the impotence that descends all too quickly on those staying home, and a collective determination to overcome it. It may be impossible to hug a grieving friend or insulate an aging parent from the threat of contagion, but you can bring cookies from local businesses, much-needed groceries, and even duck sous-vide to a nurse you love — or one who’s a stranger to you. In a world where touch, the vehicle for so many gestures of concern and affection, is prohibited, food prepared with goodwill by human hands lets nurses know that while they’re caring for patients, there are lots of people who want to care for them. 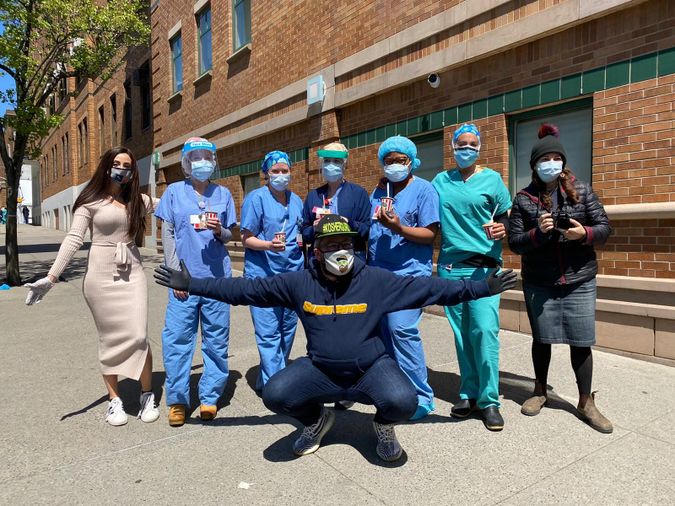 Ahead of National Nurse’s Day, nurses take a break to enjoy a sweet treat. Image by Gabriel Boxer

To celebrate National Nurse’s Day, Boxer and a team of volunteers stood outside Maimonides Medical Center all day and into the night, handing out water ices in partnership with a Rita’s franchise in Midwood, Brooklyn. It felt strange to be thanking nurses while trying to keep a safe distance from them. But Boxer said the ubiquitous protective gear was a physical barrier, not an emotional one.

“Even with the masks on, you could see them smiling,” he said.

There are lots of ways to donate money towards feeding nurses on National Nurses Day — or any other. Here are a few: