Rabbis: Synagogues should be among last places to reopen. What does that mean for High Holidays? 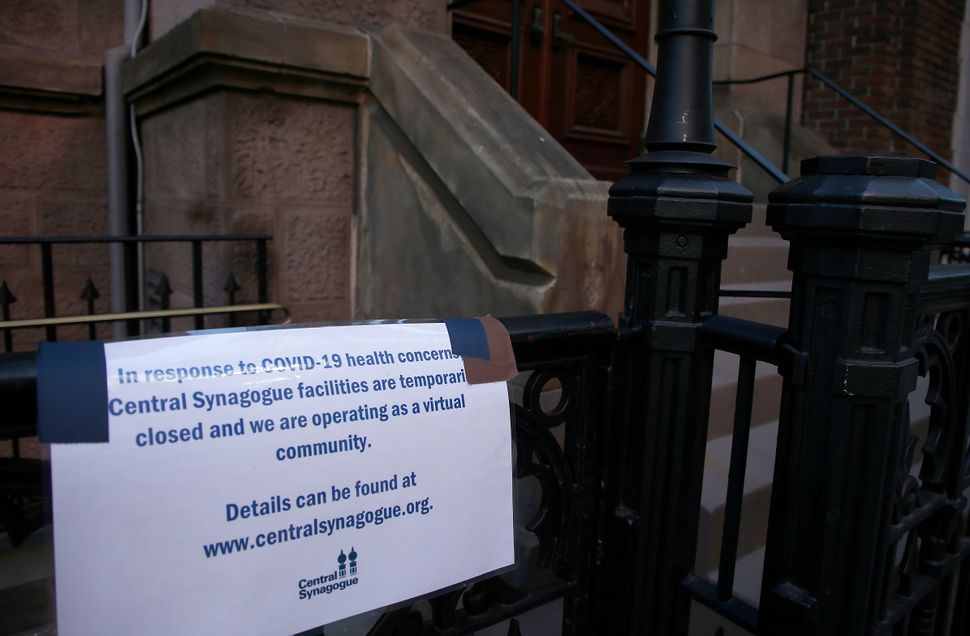 The United States is starting to reopen, but a broad range of Jewish leaders are citing religious values to say that synagogues should be among the last places to do so. And compounds the uncertainty around the High Holidays, which happen in the fall and are the peak season of the Jewish year. Will American Jews be attending Rosh Hashanah and Yom Kippur services in their houses of worship, or in their houses — on Zoom?

Two major Orthodox groups, the Orthodox Union and the Rabbinical Council of America, were the latest to weigh in on the question of when synagogues can open their doors again to congregants, issuing a joint statement Friday stating that synagogues should refrain resuming in-person services for at least two weeks after their local government allows other establishments to reopen, lest the move lead to an uptick in Covid-19 cases.

“The truth is, even with the best of advice, people are working based on projections and assumptions” in making decisions to reopen local economies, said Rabbi Mark Dratch, executive vice president of the Rabbinical Council of America.

Similarly, in late April the Conservative movement’s rabbinical association said in a statement outlining the Jewish values relevant to reopening local economies, that “in many locations our concern for health and safety should make us among the last to return to physically proximate activity, rather than the first.”

The Reform movement — the U.S.’s largest Jewish denomination — as well as Reconstructing Judaism, an egalitarian movement with just under 100 communities, have also issued similar statements.

The Orthodox statement came a day after Dr. Anthony Fauci, the director of the National Institute of Allergy and Infectious Diseases, said that it might be possible for people to gather in synagogues for Rosh Hashanah and Yom Kippur if contact tracing is implemented to avoid a second wave of the pandemic.

Yet the question of whether and when a second wave could hit is a key one, and as yet, Jewish leaders can only urge caution in the name of “pikuach nefesh,” a tenet of the faith that not just encourages but requires Jews to temporarily ignore religious obligations if it means saving a life. The classic example is that if your health does not permit you to fast on Yom Kippur, you are required to eat.

“That’s not some liberal innovation, it’s part of traditional Judaism, that saving life comes before other things,” said Rabbi Robert Tabak, a retired hospital chaplain and editor of a Reconstructing Judaism’s rabbi newsletter for rabbis.

Pikuach nefesh is what moved literally every synagogue in America to close during the economic shutdown. It’s what’s motivating leaders now, in making these statements of caution about reopening. At the same time, rabbis in all denominations consulted by the Forward are working on ideas for how to do High Holiday services that comport with the holiness of the holidays and with health guideline — that’s about pikuach nefesh, too.

Now, many congregants are wondering if this Jewish value is going to keep them from attending High Holiday services in four months. Those services are the best attended of the year, full of meaning and family feeling. They’re also a prime fundraising time for many synagogues.

“We probably need to imagine a High Holidays where we do not meet in person at all, and work backward from there,” said Rabbi Jacob Blumenthal, who leads the Conservative movement’s main umbrella organization as well as its rabbinical association.

In the Reform movement, clergy are both brainstorming ideas and tending to the anxieties of congregants who desperately want to return to their normal, synagogue-going lives, said Rabbi Hara Person, the head of the movement’s rabbinical association. But, she said, health and safety will remain the most important piece of the conversation, which is what pikuach nefesh dictates.

“Just like the decision to close the camps for this summer was the right and responsible decision, though a really sad decision, it’s a similar kind of thing,” she said. “If there’s a risk, we can’t take the risk. We’re talking about people’s lives.”

The statements from the various movements were in the form of guidance, not orders. Jewish life values local decision-making; all the more so in a pandemic that has affected different regions and populations in different ways.

“It’s not a clear-cut yes or no, it’s always contextual,” said Rabbi Deborah Waxman, the president of Reconstructing Judaism. “What pikuach nefesh might look like here in Philadelphia might be very different from Atlanta or Chicago.” It could also vary based on which populations synagogues serve. The elderly, for example, are more vulnerable.

In the best-case scenario, states will lift their stay-at-home orders and won’t have to implement them again due to a new series of outbreaks. In that case, synagogues will likely be able to resume Shabbat services and other rituals in the near-term, and High Holiday services will happen there, as well.

If that doesn’t happen, and pikuach nefesh is still the law of the (Jewish) land when High Holidays roll around, rabbis will help their congregants be flexible.

“The truth is, we still have four months,” said Blumenthal. “Who knows what the world is gonna look like in four months?”

Rabbis: Synagogues should be among last places to reopen. What does that mean for High Holidays?