A Second Chance at Motherhood 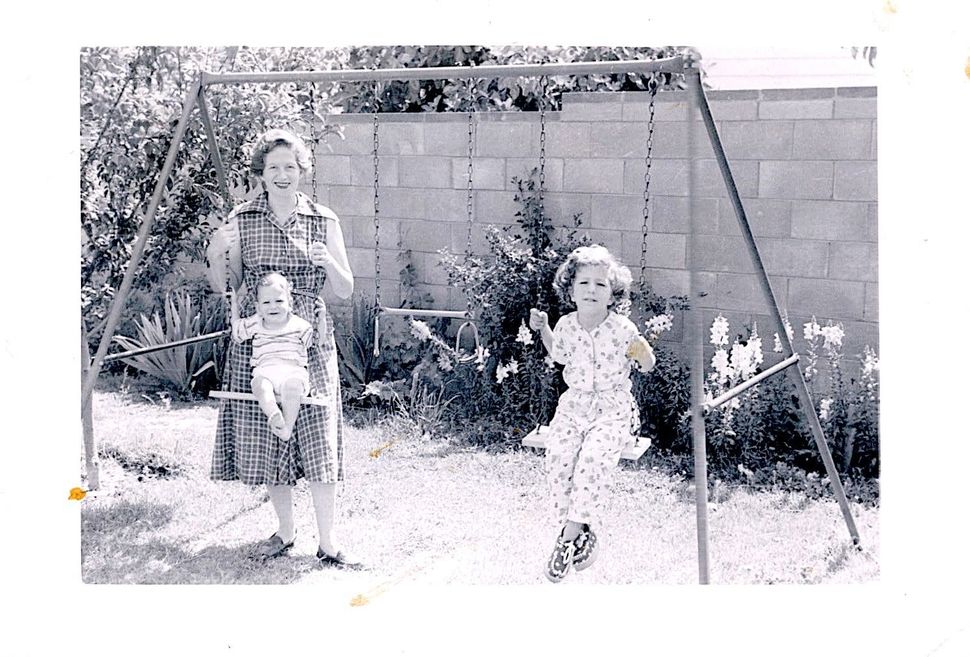 Helen Moss with her children, Dennis and Judy Image by Courtesy of Dennis Moss

“I always say that I was born to live.” Helen Grun Moss

As an oral historian for 30 years, I’ve interviewed many Holocaust survivors, and for most, Mother’s and Father’s Day are a painful reminder of parents who were murdered, as well as a joyful celebration of the miracle of being parents themselves.

This was true for Helen and Julius Moss, who shared their life stories with me in 1988.

With Mother’s Day approaching, I recently asked their daughter, Judy Moss Blei, and their son, Dennis Moss, to talk about their mother. The following includes excerpts from Helen and Julius Moss’ oral history as well as their adult children’s comments.

Helen Grun was born in Ungvar, Czechoslovakia in 1922. Like most Holocaust survivors her age, life revolved around a loving family, their Jewish traditions, school and childhood friends.

The family experienced tragedy, however, when Helen was 14.

“At the end of 1936, there was a typhoid epidemic in the whole city. First my little sister Greta got sick when she was 11. We had all the doctors and they couldn’t save her. In early 1937, my other sister Ella died. She was 17. In five weeks my mother lost two children. I was also sick, but I survived.”

Helen met her first husband, Dezider, in 1938 and the couple married in July of 1943. “My parents were able to make my wedding and see their only daughter married. The whole city came to the wedding.”

In early 1944 Helen found out she was pregnant. She and her husband tried to make decisions in the face of dangers the Jews were facing. “We were thinking about going into hiding in the forest,” Helen recalled, “but because I was pregnant, my parents didn’t want me to do that.

“At Easter of 1944, Hungarian gendarmes took our whole family, like a herd of cows, to the ghetto. Then, slowly, they were taking transfers to the concentration camp from the ghetto.”

The Grun family was taken to Auschwitz when Helen was three months pregnant, transported, as others were, in crowded boxcars. “After several days, we arrived at Auschwitz and we were separated into groups. That was the last time I saw my parents, my husband, my grandparents and my aunts and uncles.”

Helen soon discovered that women who were known to be pregnant were immediately murdered. “The Germans came several times to our barracks and asked who was pregnant, promising to give double portions of food. I never said I was.”

Though she gained minimal weight because of the meager portions of food, Helen was afraid that her pregnancy would be noticed by Dr. Josef Mengele when he came to select women fit enough to work. “We had to walk through the barracks naked, holding our shoes and dress over our head, and Mengele would look at us. If he saw somebody who had sores on their body, they were taken away and murdered. He selected other women for work, and those who didn’t get selected for either stayed inside the barracks.

“I came up with a plan. I was helping a friend in the kitchen and, in exchange, she gave me bread. I would find out where Mengele was and I would run to the back gate of our barracks and give the girl there a ration of bread to let me out. Then I’d give more bread to the girl at the back gate in a barracks where the selection was already complete. She would let me in, and I’d wait there until Mengele was out of the camp.”

In September of 1944, Helen gave birth in one of the barracks, assisted by a midwife from her hometown. “The baby was a boy. He was so little that I had a very quick delivery. The midwife said to me, ‘Look at this baby, because when you go home you’re going to have other babies.’ So I had my baby, but I didn’t have my baby.” Helen never knew what happened to her child.

The next month Helen was sent by train to work in Breslau, digging trenches.

Unlike the rest of her family and the millions who died in Auschwitz, Helen survived.

She returned to Ungvar in 1945, as did Julius Moskovics, a man she’d known before the war. “I found out from the Red Cross that my husband was dead, and Julius found out his wife was also dead. And somehow we were pulled together. One day he said, ‘Let’s get married.’ And he tells me that I said, ‘Okay!’

“After all we had been through” said Julius, “the wedding was very emotional. We had no parents or relatives there, so we were just clinging to each other.”

They came to the US later that year, first living in New York and then settling in Los Angeles.

“I was pretty young when I came back from the concentration camp,” said Helen, “and emotionally, you’re always thinking back. But when I had my children my life changed. I made my own family.” 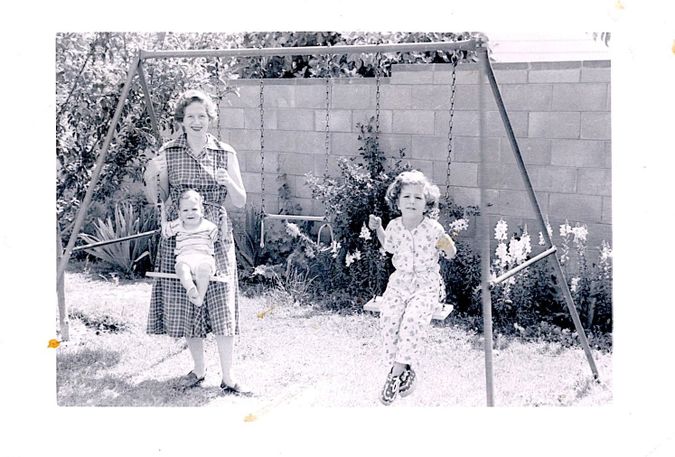 Helen Moss with her children, Dennis and Judy Image by Courtesy of Dennis Moss

I recently spoke with Judy and Dennis about their mother and their relationship with her.

“If not for the Holocaust,” said Dennis, “my sister and our children and grandchildren wouldn’t exist, because our parents would have stayed married to the spouses who perished.

“My mother lost a child in Auschwitz, which was major. Knowing that the midwife who delivered the baby told my mother, ‘You will have other children.’ influences my thinking about her. My sister and I are those ‘other children.’”

“For my parents,” said Judy, “Dennis and I represented this new life that they started in the US. We were the hope they had. The metaphor I think of is the phoenix rising from the ashes. That was their new life. 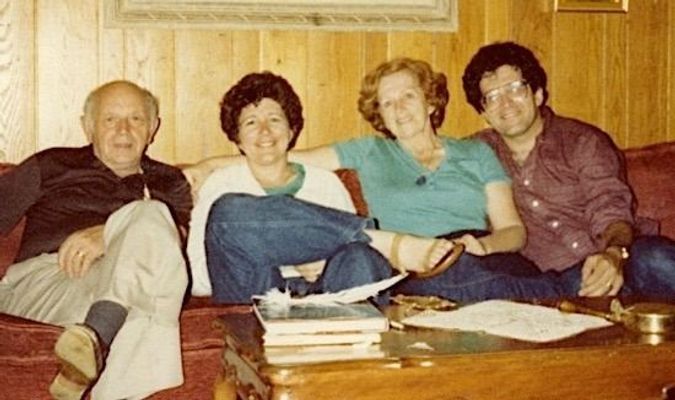 “Some survivors didn’t talk about their experiences during the Holocaust, but my mother had no qualms about telling us what happened, though she did so in a way that children could understand and handle.

“Having parents who are Holocaust survivors definitely impacted how we related to them. We were very sensitive to the fact that they had suffered tremendously, and lost so many loved ones. We were hesitant to cross them and we were not rebellious in our childhood and adolescence like many of our peers were. Because we loved and respected our parents, we were more careful not to upset them.”

“If there’s any lesson I learned from my mother,” said Dennis, “it’s not to sweat the little things. When you experience what she went through you get perspective on what’s important and she passed that along to me. She modeled it in the way she lived her life… minor annoyances didn’t affect her.

“She coped, but she was impacted severely, and that stayed with her her whole life. I was aware of that. I felt it.”

At the conclusion of my 1988 interviews with Helen and Julius Moss, they reflected on their survival.

“For us, the start here in this country is like being born again,” said Julius. “We lost everything. Not just material things, but everything. And we came penniless, naturally. We are like born again. Every day for us is a gift, to be alive and to achieve these things.”

“And we appreciate it,” said Helen. “We were very fortunate to be in those 10 percent who survived.”

Ellie Kahn is an oral historian, saving family stories for future generations. She can be found at www.livinglegaciesfamilyhistories.com or [email protected]

Ellie Kahn is an oral historian, helping families and organizations preserve their unique stories. She can be reached at [email protected] or via www.livinglegaciesfamilyhistories.com.

A Second Chance at Motherhood