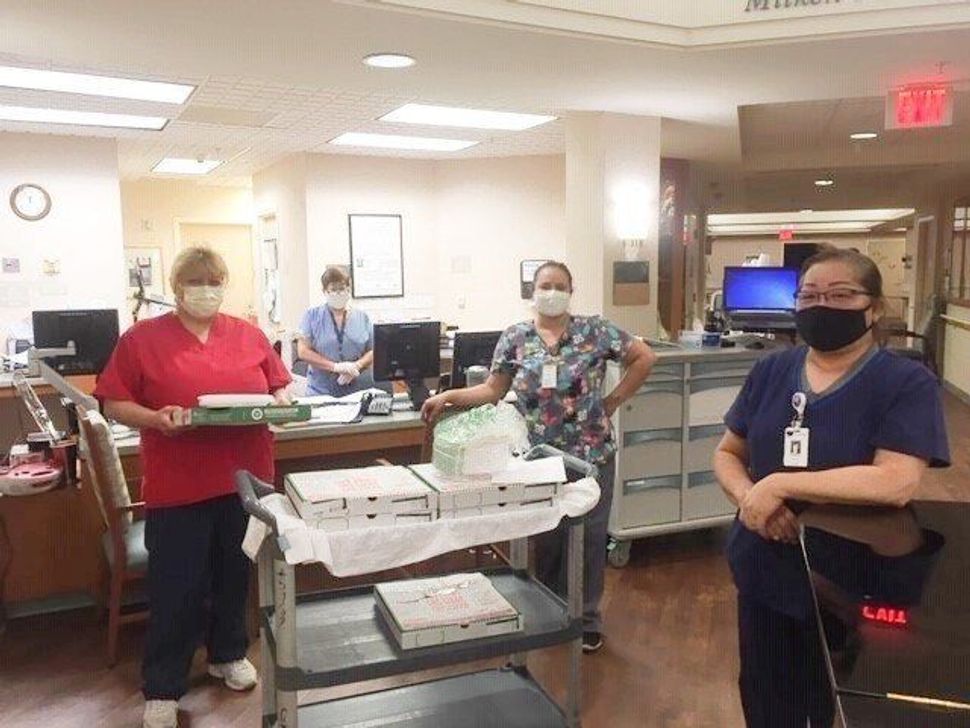 Staff at the Los Angeles Jewish Home for the Aging

With 1.4 million infections and 85,000 deaths attributed to the novel coronavirus across the United States, it’s sometimes hard to find a success story. But here’s one:

The non-profit Los Angeles Jewish Home, the largest single source provider of senior healthcare in Los Angeles, with housing for about 1,250 people and services for another 3,500, has experienced a total of just 15 infections with only three deaths. Among the others infected, three have fully recovered and eight of the remaining nine “are close to recovered,” said Dr. Noah Marco, the organization’s chief medical officer since 2014.

And, oh, the average resident at Jewish Home is 89 years, 4 months.

“We initiated what we thought made sense before it was mandated,” said Molly Forrest, the President and Chief Executive of the San Fernando Valley-based organization since 1996.

As national efforts to contain the coronavirus have sputtered with insufficient supplies and testing, overworked medical care providers and mixed messages from government leaders, Jewish Home has provided a rare bright spot during extraordinary times. Recent data show that more than a third of coronavirus-related deaths in the country have occurred in long-term care facilities, which typically serve the most vulnerable people by virtue of their age and medical issues. The rate for California stood at 36 percent, according to a recent analysis by The New York Times.

Led by officials expert in medical needs as well as health care policy, Jewish Home anticipated harmful possibilities of a new virus and reacted accordingly. They also recognized how a new illness could complicate lives already compromised by the usual chronic medical conditions of old age.

“By the end of February we could see what was coming to America,” Ms. Forrest said. “We were listening to the CDC” — the Centers for Disease Control and Prevention — “the World Health Organization and our own physicians group. We initiated our own disaster plan.”

To be fair, every one of the 1,200 nursing home facilities in California is required to have a disaster plan, which lays out what to do in such occurrences as an earthquake, civil unrest and a pandemic.

Jewish Home’s plan was heavy on the details, a necessity given the wide range of services offered. As one example, Ms. Forrest said a protocol for people leaving and returning from treatment after four hours is different from one for someone returning after eight hours.

Calling her staff “preventionists,” she said, “I give them credit for recognizing dangers, preparing early and working together to adjust every time something changes.”

It has not all been an altogether smooth ride. Dr. Marco, the son of two Holocaust survivors, said he has had an adequate number of testing kits, but unlike those that can produce nearly instant results, his require a three- to five-day turnaround. These faster tests are especially critical for asymptomatic staff and residents.

“That’s been my biggest dissatisfaction,” he said. “Other places have rapid tests. They should be in all nursing homes.”

That points to a larger issue: where nursing homes rank in the overall pecking order of receiving resources like protective gear. With residents properly isolated, the prime source of infection at nursing homes is staff, who come and go, leaving them at greater risk of exposure. Yet, as Dr. Marco said with regard to his own facility, he doesn’t always get assets he needs from government, like full body protective gear.

Nursing homes, he said, “are always low on the food chain. “Hospitals, surgery centers, clinics, universities — they have louder voices. They’re the most prestigious. Nursing homes are under-resourced throughout society. The reason is the Big Gorillas get what they need.”

There’s also the burden of government administration, which is not limited to Jewish Home. Daily reports are required by four levels of government — federal, state, county and city. Each day, data is compiled and reported, but it’s all the same data, rather than one-stop shopping for agencies to share.

“Four times the work,” Dr. Marco said, which means taking staff out of their regular duties.

And despite the low infection rate, residents are under constant duress.

“The stress is unbelievable,” Ms. Forrest said. “Clients are stressed; no one knows how long this is going to last. Isolation leads to depression, cognitive issues. Normally, our clients are active, 8 am to 8 pm. We encourage them to get out in the weather, go to a theater, see entertainment — that’s all been wiped out. And if you’re very isolated, you don’t see your kids, your grandkids, you miss the warmth of an embrace, the touch of a family member.

“Nursing homes are not designed for a person to live in a room alone.”

Challenges aside, LA Jewish Home has it better than most comparable facilities. Its staff turnover rates and staff-to-patient ratio exceed industry standards. A robust fund-raising program accounts for 14 percent of the $162 million annual budget, supplementing government reimburse rates that every medical facility complains are too low. And, no surprise, there’s a waiting list for housing.

“We’re in much better shape than the vast majority of our peers,” said Dr. Marco, declining to predict the future. “I have no idea where it’s going. It could all change in a day.”

Michael Janofsky is a freelance writer and editor in Los Angeles.