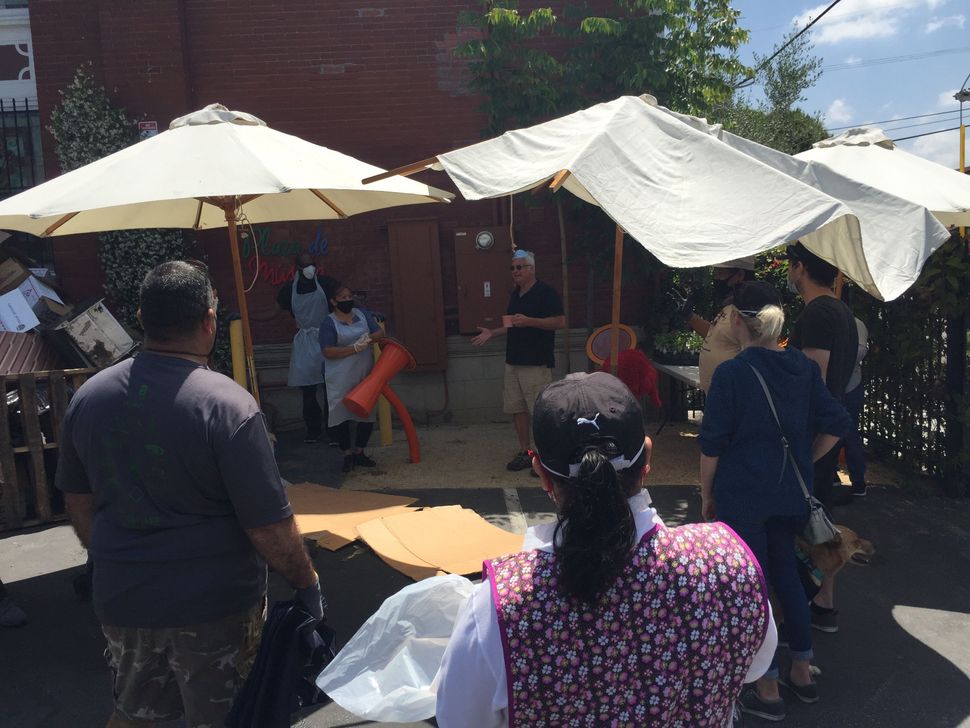 On a warm Friday near downtown Los Angeles, a line of locals stretches down 12th Street, from Union to Valencia. At the corner, they cross the street, looping back in front of the Pico Union Project. As they pass in front of the gate, a man wearing gloves and a mask hands them a bag. Inside are fresh cauliflower, summer squash and strawberries, as well as non-perishable items like canned coconut cream or tuna. The resident may also receive one of the small plants that have been donated by local nurseries. If they have children in tow, the kids also get a toy.

This is Vida Sana, a food distribution effort centered at Pico Union Project, and initially held bimonthly. Due to the pandemic, Vida Sana is now held every week, twice a week (Tuesdays and Fridays), feeding an estimated 2000 local residents, according to Craig Taubman, Pico Union Project’s founder. 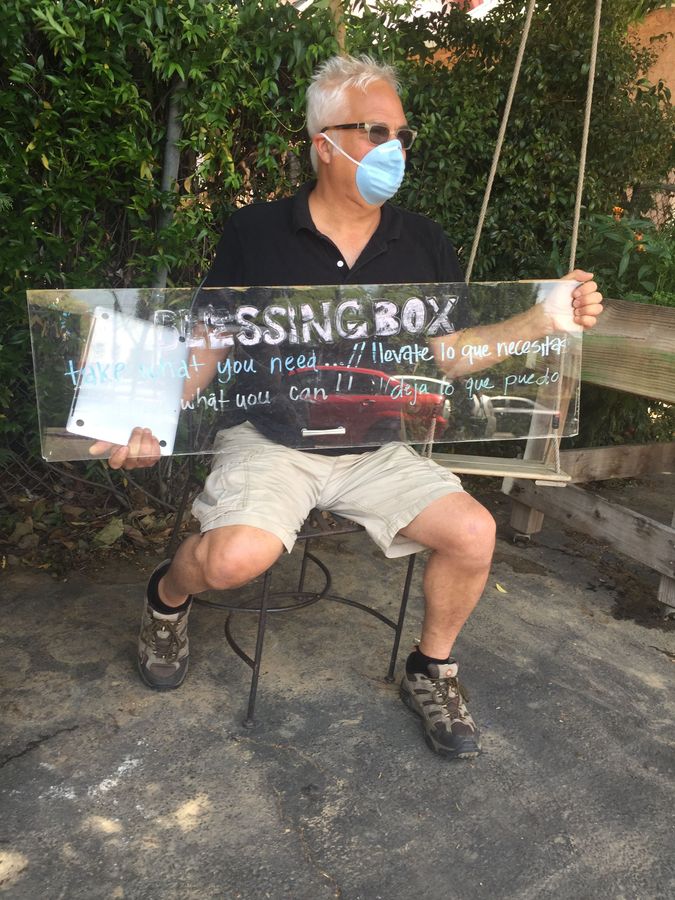 Pico Union Project is a multi-faith cultural arts center founded in 2012, that strives to invigorate Los Angeles by bringing diverse cultures together through song, story, art and activism. Now the neighborhood is mostly Korean and Latinx, but the building itself is part of Los Angeles Jewish history — built in 1909, it was the first home of Sinai Temple. Today, it houses not just Jewish worship, but a mosque and several small church groups hold services in the building. Taubman sees this as a chance to expand the definition of ‘Jewish community’ and make a significant impact on one of Los Angeles’s most impoverished neighborhoods, and make a significant impact through Jewish values.

By being less insular and more aware of global needs, Taubman said, “I think the Jewish community will be stronger. The need is us. We are the community.”

Community leaders who have supported the project include First District Councilmember Gilbert A. Cedillo, whose staff collects 50 of the packed bags for distribution elsewhere, and Los Angeles County Supervisor Hilda L. Solis.

“More families are experiencing food insecurity as a result of this pandemic,”said Solis in a statement. “I am working with the Pico Union Project to make sure we do all we can to promote the health and well-being of our neighbors.” Hunger in Los Angeles is “not a question of quantity, it’s a challenge of distribution,” said Taubman, pointing to the abundance of reclaimed food. Many locals don’t have a car and supermarkets are too far away. Those who attend Vida Sana twice a month eat more fresh produce than 60% of average Californians, according to a RAND corporation study.

The produce mainly comes to the Pico Union Project through a partnership with Seeds of Hope, the food justice ministry of the Episcopal Diocese of Los Angeles. Seeds of Hope gets their produce from Food Forward, which rescues surplus produce and donates it to more than 1,800 hunger relief agencies across L.A. counties.

Since the beginning of the Stay at Home order, Seeds of Hope has distributed close to a half-million servings of fresh fruits and vegetables to the Pico Union community, according to Seeds of Hope executive director Tim Alderson.

“This is nutrient-dense food that the people receiving it would not otherwise have been able to afford,” Alderson said.

Safety is a priority at Vida Sana. People used to “shop” while talking and getting to know each other as they walked table to table, filling their bags with produce. Now, only one person is stationed per table of produce to adhere to physical distancing guidelines. Most everyone wears gloves and masks. Everyone–including Taubman–gets tested for coronavirus once a week. The workers are not volunteers, Taubman said. They receive $15/hr for five hours of work. “It’s a real living wage if they were working full time, which they’re not,” Taubman said. A local restaurant provides them with a free lunch.

At the end of each Vida Sana, whatever is left over gets distributed by county agencies to another estimated 100-150 families in other areas.

When Bronte Dardashty heard Pico Union Project was collecting food and supplies, she arranged for a shipment of food and goods from her family-owned food distribution company, Greenfield Products.

“During these uncertain and trying times, it is important for us to remember that we all have a part,” Dardashty said.

Pamela Goldman, a teacher and educational therapist whose father built the Glen Centre, a small shopping center on Beverly Glen just south of Mulholland, heard about the need, got bins on loan and set them up at the shopping center. The bins filled up fast with clothes, diapers, beauty supplies, toys, non-perishable food, cleaning supplies, and other items.

“People forget when they have big backyards and toys and computers to play with, but these people need food and the basics. We have to take care of people in our larger community,” Goldman said. Beyond the twice-weekly Vida Sana, the Pico Union Project also stocks “blessing boxes,” small street pantries containing non-perishables, and sometimes toys, while offering the suggestion, “take what you need, give what you can.”

Taubman and his team continue tending to current needs while keeping an eye on a post-pandemic future, for their neighborhood and for the Pico Union Project itself. They had 24 garbage cans installed on the surrounding streets, and have been planting trees around the neighborhood. They’ve established a community emergency drive for donations, inviting anyone to provide varying kinds of support, from wages for the people who pack bags of produce to helping to make up for the 70% of PUP’s income that pre-pandemic had come from location rental.

“When all of this settles down, what is going to be the reality of the community? Are they going to get jobs? Will there still be a need for produce? Will we have the bandwidth to keep it going? How do we make this community, the second poorest in the county of LA, able to get more resources?”

“If there is a need in the community that we have some capacity to address, it is our responsibility to engage that capacity to help make a difference,” Alderson said, adding that “the core values and mission of the Pico Union Project and Seeds of Hope are rooted in different faith traditions that guide us each to the same engagement with our neighbors in need.”

Taubman put it simply. Repairing the world, he said, “is a significant Jewish value.”

Esther Kustanowitz is a writer in Los Angeles.