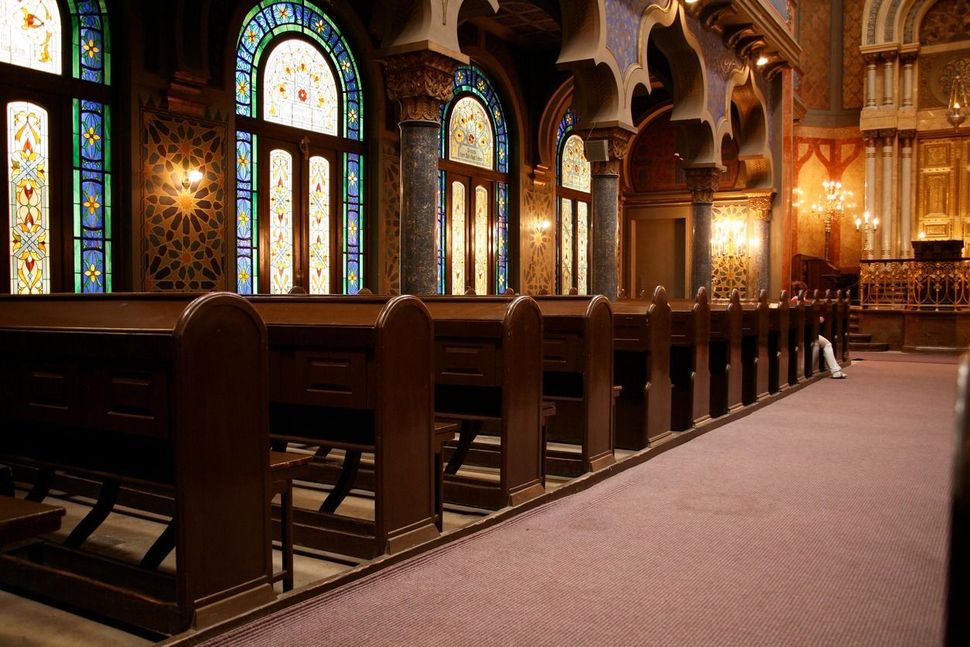 New York Governor Andrew Cuomo announced during a Wednesday press conference that worshipers will be able to resume religious gatherings of no more than 10 people starting Thursday, but some rabbis aren’t sure if they’re ready to open.

While some Jewish and other faith leaders pushed for this move, others were caught off guard by the announcement and said they had not decided whether to convene services Thursday.

Participants will have to wear masks, stand six feet apart and no more than 10 people will be able to gather to prevent the spread of coronavirus, which brings up logistical issues. Religious institutions will be permitted to have drive-in services in parking lots.

The synagogue near Chabad’s headquarters at 770 Eastern Parkway in Brooklyn, for example, has not figured out how they might reopen, according to a Chabad spokesman.

Other Jewish faith leaders, like Rabbi Ari Kirschenbaum, the director of Chabad Heights in Brooklyn, said his synagogue would wait to learn more from the state about guidelines for services before making a decision. But he had concerns about equity, and said he expected the number of worshipers to be expanded to at least 15.

He wondered “how it would impact women if a quorum of 10 men are needed for a minyan.”

“It wouldn’t be fair, right or justified for them to be excluded in any way,” he said. “Either way, it’s a step in the right direction.”

Rabbi Heidi Hoover of Beth Shalom v’Emeth Reform Temple in Brooklyn also had concerns about “how we would choose which 10 people would be included while everyone else is excluded.”

“We are going to continue what we have been doing since mid-March — we are holding services on Zoom and YouTube only. It is good to be able to have people in person at graveside funeral services, and I’m glad that having 10 people in that situation will be permitted,” she said.

Cuomo’s announcement comes after weeks of confrontation between law enforcement officials and Orthodox Jews in New York’s Hasidic neighborhoods, some of whom have flouted social-distancing requirements in order to pray together.

Live in New York? Do you plan on attending religious services now that Cuomo says gatherings of 10 of fewer are allowed? https://t.co/gcQYO9LQ6T

Religious institutions will not open fully until June 26 at the earliest, as they are included as a part of the final phase of Cuomo’s reopening plan.

“The last thing we want to do is have a religious ceremony that winds up getting more people infected,” said Cuomo.

Cuomo said he is convening an interfaith advisory council to talk about how to safely bring back religious services in their entirety.

Among the members of the interfaith advisory council is Rabbi David Zwiebel, the head of Agudath Israel of America, an Orthodox lobbying group that released a statement yesterday criticizing the governor for resuming professional sports contests and opening jewelry stores before synagogues.

“Religious expression and children’s education should not be last on the list of priorities for safe reopening,” said the statement. “In fact, by both legal and moral imperative, they should be among the first.”

Avrohom Weinstock, the chief of staff and associate director of education for the group, said yesterday’s release was likely not the impetus for the announcement, but Agudath and other religious groups have had phone calls and other discussions with Governor Cuomo’s office about resuming religious services.

“We are certainly not advocating that things open earlier or things open in a way that’s unsafe,” he said. “When the government is looking at the whole picture and kind of saying, ‘How should we open up other things?’ religious services should be right up there at or near the front of the line.”

Weinstock said there is a constitutional argument to be made for opening up religious services, but Agudath staff “weren’t looking to sue anyone or do anything like that, we were looking to really kind of discuss this in a manner of dialogue.”

He also said he believes Jewish worshipers will follow the rules, which will certainly be a concern after widespread media attention held on Orthodox Jews who attended large funerals and weddings during the pandemic.

“I’m hopeful that if you have a situation now where this is what’s allowed and this is how it’s allowed and there are specific rules,” Weinstock said, “there are people that really want to follow the rules and they want to know how to do it right and they’re happy to have some guidance from government.”

He stressed that religious services, schools and camps are a crucial way of passing on values in the Orthodox community.