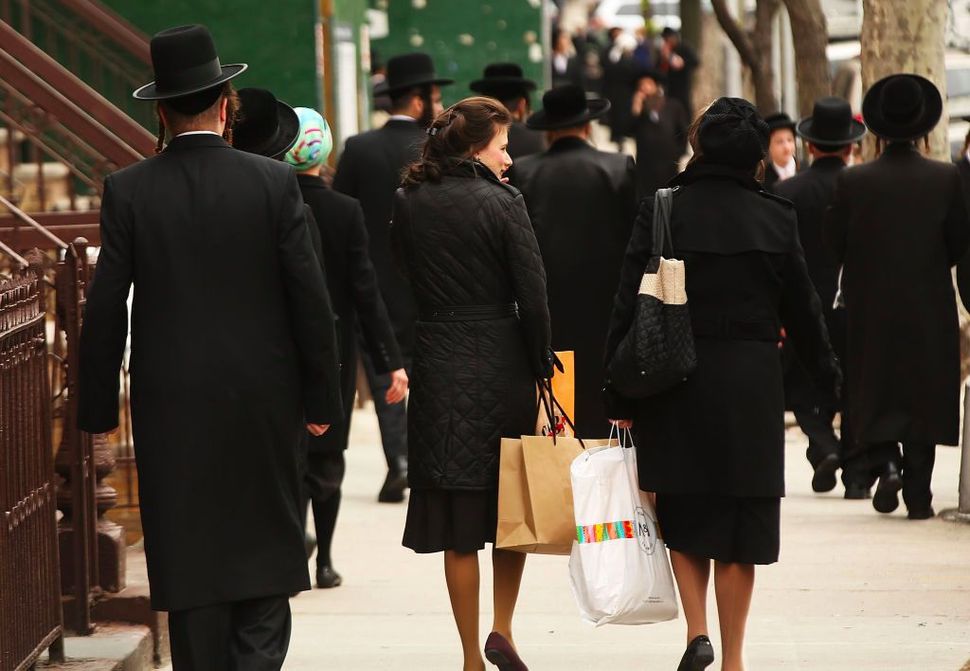 Orthodox women are anxious to pray in synagogues once more, but New York’s new guidelines for resuming religious services may leave them out in the cold.

On a recent Shabbat evening, Laura Shaw Frank took a walk with her husband through their neighborhood in the Bronx. Their route took them past the shuttered doors of their synagogue, Young Israel Ohab Zedek. When she thought about the months that have passed without communal prayer, Shaw Frank, associate director of contemporary Jewish life at the American Jewish Committee, choked up.

“I had a lump in my throat just looking at the building,” she said. “I yearn so much to daven with my community.”

Bans on in-person gatherings have put Orthodox communal life, which revolves around public worship, on pause. At a press conference on Wednesday, New York Governor Andrew Cuomo provided hope for a return to normal rhythms, announcing that as of Thursday, religious gatherings of ten people or fewer would be allowed to resume.

But for women in the Orthodox world, those new guidelines might just mean more of the same spiritual isolation.

That’s because traditionally, Jewish communal worship requires a quorum, or minyan, of 10 men. In Orthodox congregations, women do not count towards that quorum. The new regulations cap attendance at the minimum number of participants needed for a minyan, and because of that women will not be able to attend services at all. While women are not required to pray communally by halacha, Jewish law, for many attending daily worship is an important part of spiritual practice.

“It wouldn’t be fair, right or justified for them to be excluded in any way,” said Rabbi Ari Kirschenbaum of Chabad Heights, in Crown Heights, Brooklyn.

For Orthodox synagogues deciding when and how to reopen, hard conversations lie ahead about accommodating the spiritual needs of female congregants while balancing halacha and public health concerns.

“Houses of worship of every religion are going to have to make hard choices,” said Daphne Lazar Price, executive director of the Jewish Orthodox Feminist Alliance. “For Orthodox congregations in particular, it’s going to force them to make even harder choices.”

When Kirschenbaum first heard about the new guidelines, the unintentional ban on female worshippers was the first thing that came to mind. He said that the state’s guidelines were not crafted with the needs of the Orthodox community in mind, and hoped that after receiving feedback officials would raise the limit to allow 15 or even 12 people to worship together. He also suggested that synagogues with outdoor space could host larger minyans while observing social distancing guidelines (Gov. Cuomo is encouraging congregations to host services outdoors, but he did not say whether such gatherings should include larger numbers of people).

Lazar Price agreed that raising the limit on attendees would best serve the needs of female congregants. She pointed to Congregation Shaare Tefilla in Dallas, Texas, as a model. Texas’ looser social distancing restrictions allowed the congregation to form a daily minyan of men and admit a limited number of additional worshippers, prioritizing attendance based on the need to say kaddish, the prayers of mourning, without regard to gender.

But if New York’s guidelines remain the same, there’s significant disagreement over whether synagogues should reopen when only men can pray or wait until the limit on attendees lifts — even among those who have long pushed for broader roles for women in the Orthodox community.

In a Facebook post on Wednesday, Dr. Elana Stein Hain, a scholar at the Shalom Hartman Institute, made an impassioned plea for Modern Orthodox minyans to include women. “Davening isn’t just about the technical requirements of minyan,” she wrote.

The Modern Orthodox movement, she added, has long struggled to balance “the desire to make room for women’s maximal religious participation and the desire to fulfill the dictates of halakhah [sic]. [Modern Orthodoxy] should own its own principles and struggles in this moment,” she wrote.

Many who saw the post agreed, saying that the manner in which synagogues reopen will affect their feelings of dignity and inclusion within their communities. “I think seeing the Orthodox community take women’s role in a minyan seriously would force me to feel responsible to play more of a part in shul in the future,” one commenter wrote.

Shaw Frank said she would be “heartbroken” if her synagogue opened without finding a way to include women, “even though I would be so overjoyed for my husband, who loves minyan so much.” She said she would be open to praying with a women’s tefillah, a prayer group that operates separately from a male-only minyan, but added that such groups would not meet the needs of women who need to say kaddish, prayers which in Orthodox communities only occur through a minyan of men.

Lazar Price said she knew of some congregations considering delaying opening until more than 10 people can attend services, but she hesitated to advocate that as the best choice. “We are not in the business of telling people not to hold minyan,” she said, adding that in Orthodox congregations, observing halacha and returning to public prayer would always come first.

That sentiment was echoed by Ruth Balinsky Friedman, a maharat, or female leader, at Ohev Sholom, an Orthodox congregation in Washington, D.C. On Facebook, she wrote that postponing the resumption of prayer avoids acknowledgement of the uncomfortable reality that halacha makes uncomfortable distinctions between men and women.

“At the end of the day, women don’t count in a minyan,” she wrote. “No one knows that more than the female spiritual leader of a community standing in shul waiting for a tenth man. I’d rather us reckon with that directly than continue to find ways to make that seem more comfortable than it is.”