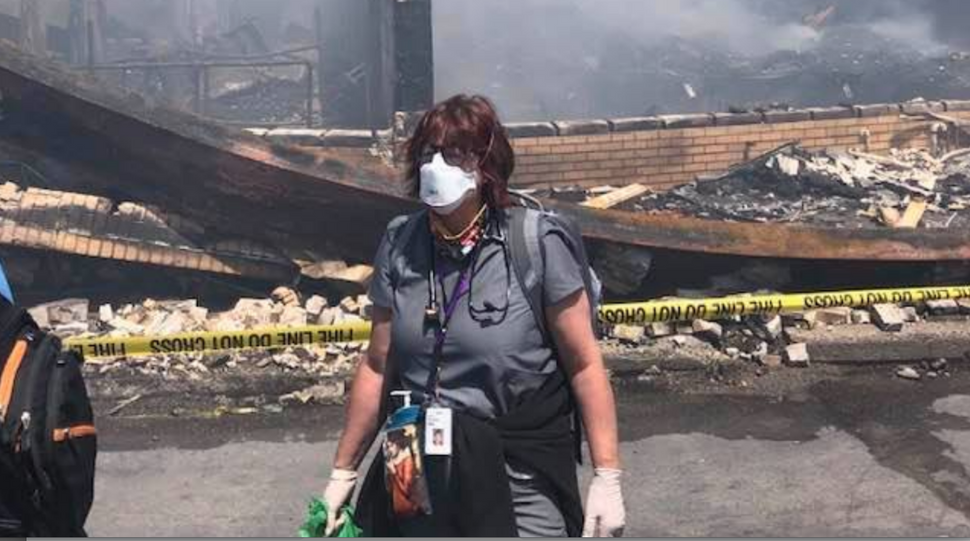 Boots on the ground the last few hours, and the scene is more devastating and horrific than you can imagine from the photos.

Today I walked for miles offering help, cleaning and bandaging cuts, handing out gloves, masks, water. Offering support to the first responders, firefighters still out there fighting flames with no sleep and knowing that tonight may be just as bad or worse. Thank God, no major medical crises, mostly applying Band-Aids to the cuts on hands and arms of volunteers sweeping up the glass from what is undeniably a war zone. What up until up yesterday was our home, our neighborhood.

But the real story is the thousands and thousands of people who showed up with brooms, with bags and garden gloves and dustpans, with plywood and saws and drills, to help businesses board up. I saw chains of people standing in flooded businesses, forming chains to sweep the water out of the flooded, semi-burnt but entirely demolished stores. Thousands of people, black and white, joining together to help each other, to pray together, and to rally. This is the Minnesota I know.

What I didn’t see? No police (which was for the best….they weren’t needed). No mainstream media covering this amazing cleanup effort. None of the big medical groups had any volunteer tents, tables or presence, likely because they could not ensure safety for their employees. Just people.

As a doctor, as an ally, as a Jewish mom, I offered help however I could.

I helped deescalate a situation of an agitated, distraught black man lying on the ground in front of a fire truck, pretending he was hogtied to make a point, because he was grieving and angry and wanted someone to listen to him, and ended up sitting with him on the curb while he cried on my shoulder.

The situation with this man was really the story. He was screaming and a riot almost started because the bystanders thought he was being abused or tortured by the firefighters, I lay on the ground next to him.

It was a moment of God.

I also prayed with a Christian group who kept saying they had to spread Jesus’ name during the work. I added a prayer to the group and said that I was a Jew, and asked them to help the Jews, the Muslims and everyone else by mirroring, “May God lift his countenance upon you,” and helping people by showing Jesus in their countenance without needing to speak Jesus’ name out loud. That the countenance of God would shine through them louder without the words. They cried and hugged me.

I was given the bullhorn at the big rally to just encourage people to stay safe and healthy through this traumatic time. I joined people in their prayer circles.

I did what I could today.

This essay originally appeared in TCJewfolk. Reposted with permission.