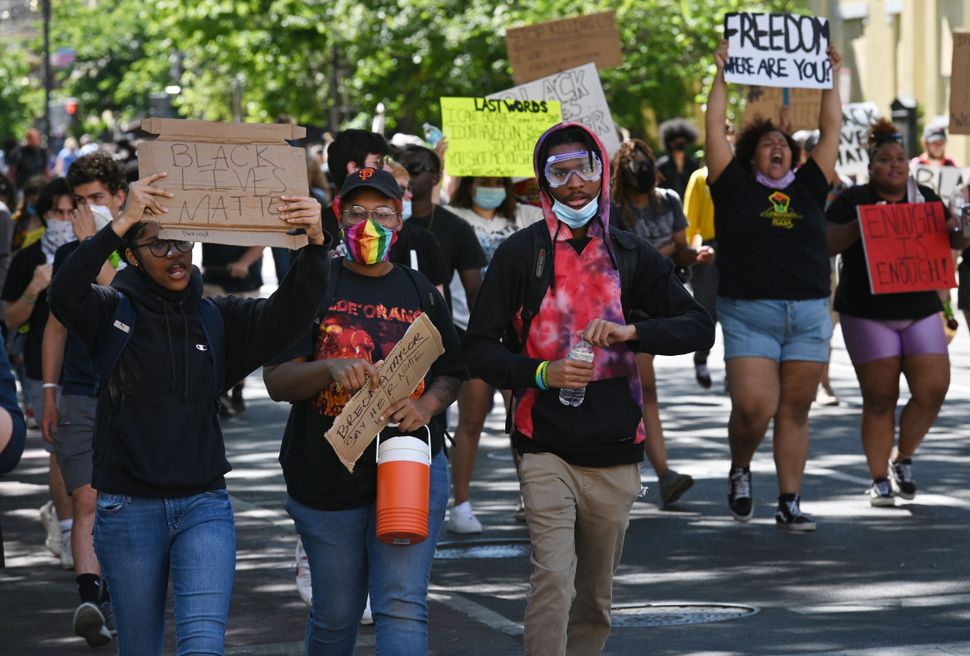 Protesters hold placards while marching on H Street near Lafayette Square in Washington, DC on June 1, 2020. Image by MANDEL NGAN/AFP via Getty Images

Online outcry in the aftermath of the killing of an unarmed black man by a Minneapolis police officer has seen a smattering of protesters comparing American police brutality to the killings of Palestinians by Israeli soldiers — a return to rhetoric common in the early days of the Black Lives Matter movement.

Singer and model Dua Lipa shared an Instagram post yesterday that compared police killings of unarmed black men to the killings of Palestinians by Israeli soldiers.

Palestine will be free
Thanks #dualipa for support palestine
????????????#dualipaisoverparty pic.twitter.com/5aaBzz6uJs

The post, originally written by American director Vin Arfuso and reposted by Lipa, said in part, “While everybody’s in the mood to talk about human rights, this is what happens EVERYDAY in Palestine, paid for by our taxpayer dollars.” The post has since been deleted but showed a photo of Israeli Defense Soldiers next to a blindfolded young man, presumably Palestinian.

When the Black Lives Matter movement emerged from protests in Ferguson, Mo., after a police officer killed an unarmed black resident there in 2015, one leading organization’s platform espoused the boycott, divestment and sanctions movement against Israel.

Indeed, the Israeli-Palestinian conflict has emerged as a flashpoint for progressive activists that has divided several groups, including the feminists of the Women’s March and Bernie Sanders supporters, and spurred the creation of Zioness, a liberal Zionist organization.

On Monday, however, Jewish organizations across denominational and political lines focused not on the issue of Israel, but on the injustice of Floyd’s death and on expressions of solidarity with the African-American community.

The Anti-Defamation League, which opposes BDS, issued a statement which characterized the “system” as “racist and unjust.” The subject line of the Conservative Movement’s email read “George Floyd z”l,” using the acronym for the Hebrew phrase used when beloved people die — may his memory be for a blessing. And the liberal advocacy group Bend the Arc issued a call for the Jewish community, “especially white Jews,” to rise up for Black lives and police accountability.

The associations between George’s death and those of Palestinians at the hands of the Israeli military appeared mainly online, although a synagogue in Los Angeles was vandalized with graffiti expressing a similar sentiment. Some activists on the left see the problems of the Palestinians as inseparable from those of Black and Indigenous people, citing the concept of “intersectionality,” or the ways in which different forms of discrimination can overlap and reinforce each other.

If you condemn one but justify the other, you’re the problem. #blacklivesmatter#palestinianlivesmatter
By @ThePIPD pic.twitter.com/4lOE8UHI7I

Some users have focused on the fact that the manufacturer of teargas canisters used by police during demonstrations also makes military tools for the IDF, and that the IDF trains American police.

This is one of the cartridges LAPD used to fire rubber bullets at protesters that my friend picked up yesterday. Notice who the manufacturer is? Combined Tactical Systems is the primary supplier of teargas to the Israeli police & IDF used against Palestinians 1/- pic.twitter.com/Mj0Xb15ayr

Police departments in cities like Boston, Baltimore, New York and Chicago have engaged in law enforcement exchanges with Israeli police officers since the 1990s.

Critics of the Israeli military’s treatment of Palestinians also used Israeli actor Gal Gadot, to make their point, accusing her of hypocrisy because she demanded justice for black Americans despite her own record of service in the Israeli military.