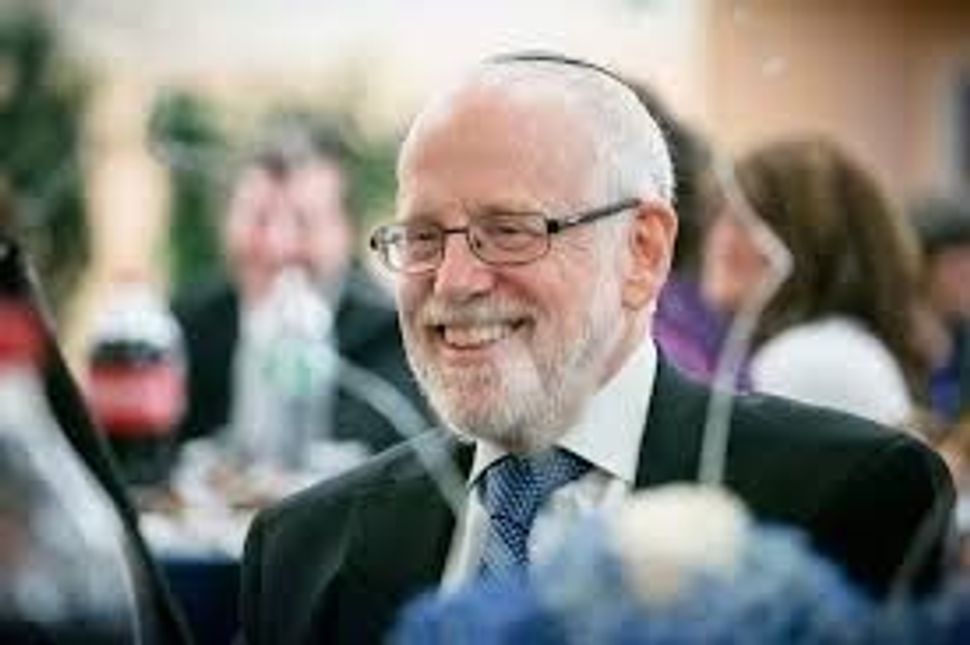 The prominent Jewish historian, Steven M. Lowenstein, passed away at his home in Los Angeles after a ten-month struggle with pancreatic cancer. He had largely completed a massive scholarly project on which he had been working for decades: a 731-page study of the demographic history of German Jewry. This alone would stand as a remarkable capstone to Prof. Lowenstein’s career. What made it all the more exceptional is that he labored on his magnum opus while pursuing a second career as a social worker on Skid Row, dealing with the large homeless population of Los Angeles.

This may be the most extraordinary, but by no means the only,twist in a fascinating life and career.

Steve Lowenstein was born in 1945 in New York City. He grew up in the distinctive ambiance of Washington Heights in upper Manhattan, which after the Second World War boasted a large population of German-Jewish refugees and survivors. It was there that Steve first began to develop the finely tuned sensors that he used as an historian—and later as a social worker– to discern differences within seeming uniformity.

To the outside observer, the world of Washington Heights, the world of New York’s yekkes, seemed to be a striking example of group cohesion. But from within it teemed with variations—in socio-economic, political, denominational, geographic, even linguistic terms. Steve came to learn early that not all German Jews, including his own family, were urban, educated, assimilated, and Reform. His textured grasp of Washington Heights led him to write a wonderful history of the community from which he came under the title Frankfurt on the Hudson: The German-Jewish Community of Washington Heights, 1933-1983 (1989)

From Washington Heights, Steve made his way slightly south to City College. In the intellectually rich environment of the CCNY History Department, where he studied with a number of other students destined to make their way to distinguished careers in Jewish studies including David Ruderman and Eugene Ornstein, Lowenstein began to develop his professional skills. He graduated with a B.A. in 1966 and left New York for graduate school at Princeton. There he worked with the eminent historian Theodore Robb on a dissertation that explored a year in the life of the Protestant Huguenot minority in the Languedoc region. (In the course of his doctoral research, he not only developed a good command of French, but of North African-inflected Hebrew, acquired during Shabbatot at North African synagogues in France—an accent that he delighted in displaying at his decidedly Ashkenazi shul in Los Angeles.

At this point, there is another curious feature in the story. After completing his Ph.D. in 1972, Steve took a job not in the field of French history, but rather as an archivist at YIVO, the pre-eminent research institute for Eastern European Jewish history and Yiddish culture. What was a nice German-Jewish boy with a Ph.D. in French history doing in the bastion of Yiddish? With his capacious mind, which found no subject in Jewish history foreign to him, Steve immersed himself in Yiddish language and culture, developing ambitious pedagogical and research plans at YIVO. Three years later, he took at a job as archivist and assistant to the director at the Leo Baeck Institute, the premier research institution for the study of German Jewry and, at that time, the uptown rival of YIVO (the two are now united under one roof at the Center for Jewish History).

German Jews and Eastern European Jews are not supposed to get along, and over the course of modern history, often didn’t. But Steve Lowenstein bridged the gap. As a deep lover of language (and dialectic variations) and as a wide-ranging historian, he melded his native familiarity with German and Germany to an acquired interest in Yiddish language and culture, something that few scholars of his day could claim. Here once again, he exhibited a unique ability to discern and appreciate cultural differences without any trace of condescension toward one or another variant.

Throughout his career, Steve Lowenstein overcame seeming opposites, taking what others cast as coarse stereotypes and crafting them into nuanced distinction. Not only was he able to mediate between German and Eastern European Jews. He was able to navigate peaceably the transition from the East to West Coast. In 1979, Steve came out to Los Angeles to take up a job as a professor of Jewish history at the University of Judaism, later to become the American Jewish University. There he began to publish a series of articles and books devoted to German Jewish history. In doing so, Steve took yet another interesting turn in the road.

Much attention and notoriety have been devoted to German Jewry, or more particularly, one strand of it: its intellectual history focused on a series of leading thinkers from Moses Mendelsohn to Samson Raphael Hirsch and Abraham Geiger to Herman Cohen to Franz Rosenzweig, Gershom Scholem, and Hannah Arendt. When most people think of German Jewish history, they conjure up an exalted, ethereal intellectual tradition populated by highly assimilated urban individuals.

Steve Lowenstein offered an entirely different account. He studied not urban Jews, but rural Jews (who constituted a majority of the community until 1871), not high Berlin German, but small-town German dialect, and not intellectuals but shopkeepers and cattle dealers (from whom his own people descended). To scholars who studied elites, Steve showed an alternative path. He examined the lives of normal folk, adding a high degree of evidentiary difficulty to his work because they typically did not leave behind articulate treatises on the ethics of cattle transactions.

He had to be dogged and ingenious to find sources to reconstruct that experience. That is the particular burden of the social historian who studies history from the bottom up rather than from the top-down, focusing on material, rather than more abstract intellectual, aspects of the past. Steve was and had to be fastidious in reconstructing the social history of German Jews—and he was equally fastidious in collecting the documentary materials of his own life, as can be seen in the voluminous archival collection at the Leo Baeck Institute

Steve brought this new wide-angle lens to old topics such as the Berlin Jewish community, about which he wrote a superb book in 1994 (The Berlin Jewish Community: Enlightenment, Family and Crisis, 1770-1830). As he had discerned in his own Washington Heights neighborhood, Berlin, from the late 18th century, was made up of more than a single stratum of cultural elites. Indeed, there was far more socio-economic and intellectual diversity than previous scholars had thought, and that insight of Steve’s has lasted a generation and nurtured the research leads of many junior scholars.

Ever attentive to the dynamic tension between difference and uniformity, he switched gears in 2000, publishing a book of a global sweep, The Jewish Cultural Tapestry, in which he surveyed a dizzying array of local Jewish custom or minhagim. My personal favorite is the chapter on the encounter between gefilte fish and cholent, on one hand, and malawach and couscous on the other. That very framing captures something of Steve’s vast cultural appetite, his attention to difference, and, above all, his great sense of humor (which he honed as a connoisseur of jokes). In recognition of its boundary-crossing quality, the book was awarded the National Jewish Book Award in 2002.

Having reached the top of his profession and gained renown with a thick stack of publications to his name, Steve took a daring turn in the road. He decided a little less than a decade ago, after the death of his beloved wife Marilyn, to leave behind the field of history to study social work at UCLA. The decision was, frankly, baffling to his colleagues, who couldn’t understand how a scholar of his caliber could abandon his beautiful craft. In fact, nothing could be more symbolically revealing than the cultural distance Steve traveled from the lofty heights of Bel Air, where the University of Judaism sat, to the flats of downtown Los Angeles, where he began to work as a social worker after receiving his M.S.W.

There, in his new workplace, Steve met up not with nineteenth-century Jewish cattle dealers, but with twenty-first century homeless people, drug addicts, the mentally ill and the economically disadvantaged. It was stunning to hear Steve talk—in between and, truth be told, even during prayers in shul– about the people he encountered in the course of his workday. As with his historical subjects, he betrayed nary a trace of condescension or hierarchy, but rather full-on appreciation for their idiosyncrasies and dignity. In a sense, he was continuing his work from before. He was listening to, collecting, reconstructing, and weaving together stories–rich, partial, and deeply meaningful stories. One could only marvel at the seamlessness of Steve’s professional transition, as well as at the extraordinary patience and hesed that he revealed. (It is perhaps fitting that he passed away at the time of Shavuot, the holiday that celebrates Ruth’s boundless hesed.)

The final remarkable turn in Steve’s life was the discovery that, precisely at the point that he left the professoriate for Skid Row, he was entering the final phase of writing his scholarly masterpiece. For more than two decades, Steve worked on a massive study of German-Jewish demography, based on the research notes of the great German-Israel demographer Usiel Oscar Schmelz. After a full day of demanding social work, Steve would labor into the night, poring over documents and manuals containing statistics on the births, deaths, marriages, divorces, immigration, and conversions of German Jews. The aggregate of these thousands of data points makes for an altogether new and comprehensive picture of German Jewry, more thorough than any other account we have on record.

Steve Lowenstein’s magisterial book has not yet been published, but, we hope, it will see the light of day in the near future. It will be a fitting testament to a scholar of immense talent and skill, a Jew of deep knowledge and passion, and a mentsh of the most caring kind. May his memory be a blessing.

Steve Lowenstein is survived by his children, Dr. Ruth Glasser (Rabbi Yaakov Glasser) and Kenny (and Penina), and nine grandchildren, as well as by his partner, Rabbi Pat Fenton.

David N. Myers holds the Sady and Ludwig Kahn Chair in Jewish History at UCLA, where he directs the Luskin Center for History and Policy. .