Black Jews to white Jews: Change your relationship with police 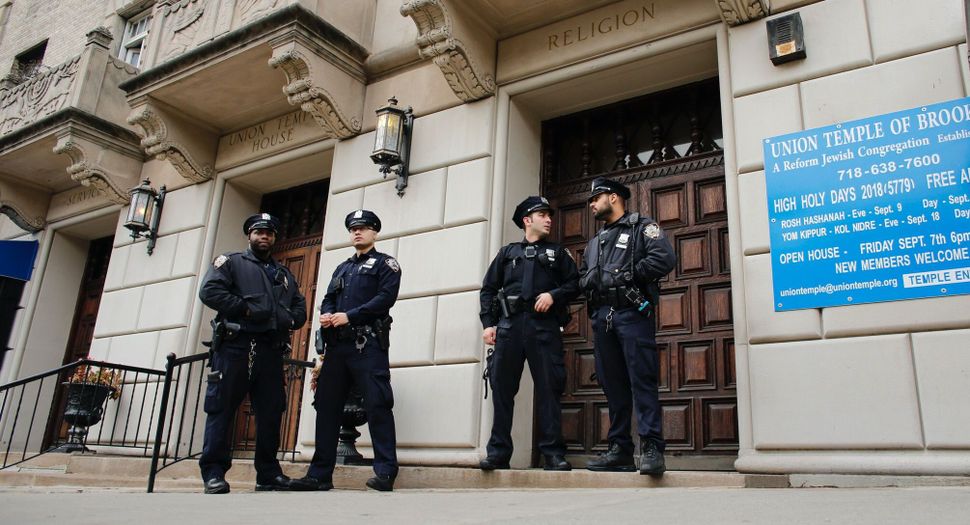 At protests across the country, marchers are holding up signs that read “Defund The Police.” On Tuesday, numerous celebrities, as well as the executive director of the American Civil Liberties Union, signed an open letter circulated by the national Movement 4 Black Lives group calling for money to be diverted from police budgets to fund social services and investments in black communities. Politicians like Alexandria Ocasio-Cortez say New York City should slash its police budget.

But that call presents a particular challenge for white American Jews, who depend on the police to monitor and curb rising anti-Semitic attacks. Now, black Jews and activists are calling for white Jews to confront their privileged relationships with police — a demand that may feel uncomfortable for those who want to show their support for black lives, but fear for their own safety.

“Maimonides says there are steps of teshuvah,” — repentance — “and the first step is to stop doing the thing that’s causing the harm — America has never stopped causing harm to black people, ever,” said Koach Frazier, a black rabbinical student and the co-founder of Tzedek Lab, a network of Jewish activists. “And what is the Jewish community doing to stop it?”

For decades, American Ashkenazi Jews (descendants of eastern European immigrants) have benefitted from close relationships with the police. The tone was set in the 1950s, when synagogue bombings in the South led police to create a network of departments in 28 cities to share tips about other potential attacks. More recently, after the October 2018 Pittsburgh massacre, which killed 11 Jews during Shabbat services, police officers stationed themselves at synagogues around the country to deter copycat shootings. In a report issued in January, the Secure Community Network, an initiative of the Jewish Federations of North America and the Conference of Presidents of Major Jewish Organizations, advised synagogues planning to use armed security to hire police officers rather than private guards.

“Police have pretty much treated Ashkenazi Jews like white people,” said Cheryl Greenberg, a professor of race in the U.S. and black-Jewish relations at Trinity College.

At the same time, Jews share a collective memory of being a minority facing state-sanctioned persecution and violence: in the Soviet Union, in Nazi Germany, and in many other countries over two millennia.

“The way I would put it is that Jews are in a particularly torn position, because they are a vulnerable minority,” Greenberg said. “And so on the one hand, they need police protection, even more than other white people. On the other hand, they, too, have been targeted.”

That sense of fear has deepened since the shooting in Pittsburgh, which led many synagogues to tighten their relationships to police and deepen their reliance on armed guards.

“It’s not as if Pittsburgh and Poway and Jersey City and Monsey did not happen,” said David Pollock, director of public policy and security at the Jewish Community Relations Council of New York, referring to a series of deadly anti-Semitic attacks over the past two years. “There are threats against Jewish communal organizations and against Jews. Law enforcement is the best way to counter those threats.”

Yet for Jews of color, the increased reliance on the police in Jewish settings has come at the expense of their sense of personal safety.

“I can speak from personal history on this: Your blood pressure goes up, your pulse accelerates when you see an armed police officer,” said Yolanda Savage-Narva, the executive director of Operation Understanding D.C., a not-for-profit in Washington, D.C. that promotes black-Jewish relationship building.

White Jews, Savage-Narva said, have struggled to understand how alienating a police presence can be for black Jews and Jews of color in general, who demographers estimate are 6% and 15% of the Jewish population, according to competing estimates.

Some Jewish organizations have already aligned themselves with the call to defund law enforcement.

Jewish Community Action, a Minneapolis-based group, is supporting efforts of local black-led groups like Reclaim the Block to cut the Minneapolis Police Department’s budget by nearly a quarter, arguing that prior efforts at reforms did not prevent George Floyd’s killing.

Carin Mrotz, the group’s director, said she is getting more support than pushback for the stance. “I think a lot of it, honestly, is that we saw that man murdered on the video,” Mrotz said. “It makes people much more able to empathize with that amount of pain and anger.”

Even when confronting things like anti-Semitic vandalism, Mrotz said, Jews should “challenge our first instinct to call the police, when calling the police can have a devastating or fatal repercussion for people of color.”

Jews for Racial and Economic Justice, a New York-based group, is circulating a call for New Yorkers to urge city council-members to shift funding from the police department to social services.

“We’re very clear about the priorities that we are calling for; if the goal is to build healthy, thriving communities, we need to divest from punitive systems and invest in restorative ones,” Audrey Sasson, the executive director of the group, wrote in an email.

Rabbi Susan Talve, leader of Central Reform Congregation in St. Louis, Mo., said that she is willing to consider an overhaul of the concept of policing. Talve, who joined with protesters in Ferguson in 2014, said that her congregation uses off-duty officers as guards, but only officers of color who are briefed on the synagogue’s diverse community.

“I get that we need a big change,” Talve said. “That may take dismantling what we know as the police, because, as Audre Lorde said, you cannot dismantle the master’s house with the master’s tools.”

Just about every major Jewish group has made a statement on George Floyd’s killing, in nearly every case condemning it and expressing solidarity with the black community. But Jewish organizations have not addressed the Jewish community’s ties to the police in those statements, instead emphasizing their willingness to help fight systemic racism in general. Statements from the Reform movement, Hadassah, Bend the Arc and the Anti-Defamation League did not address police reforms. (Although Bend the Arc, the Jewish Council for Public Affairs, Jewish Women International and the National Council of Jewish Women and the Religious Action Center of Reform Judaism signed onto a letter from hundreds of organizations asking Congressional leaders for police reform.)

“In this moment, we remain focused on hearing the call from people of color asking that we as a nation address ongoing racism in all sectors and at all levels of society,” Rabbi Jonah Pesner, director of the Religious Action Center, emailed in response to a question about the Jewish community’s relationship to the police.

Jewish groups that did specifically address the issue tended to focus not on whether they should or should not support law enforcement, but on how to reform it. A statement from the Conservative movement said that police “have not been able to make the necessary changes to a system that disproportionately targets minority communities and people of color.” In a letter released Tuesday, 60 rabbis from the progressive rabbinical group Torat Chayim pledged to “talk about why too many interactions with police are terrifying to Black Americans.”

“The Jewish community should not be so simplistic and black and white as being ‘anti-cop’ or ‘pro-cop’ but rather work for sensible police policy reform and serve robustly as strong allies in solidarity with the black community,” Rabbi Shmuly Yanklowitz, a progressive Orthodox rabbi and a member of Torat Chayim, said in an email.

Michael Masters, the national director of the Secure Community Network, said that when police departments lose funding, what tends to suffer is exactly the initiatives many activists are calling for: increased training, accountability and transparency. He noted that most police departments do not have line items for protecting houses of worship and that a budget cut across the board would impact synagogue security.

Protecting good policing is as much in the interest of black communities as Jewish ones, he added: “The reality is that many of the offenders directly related to the cases in our community, their hatred and biases run as deep against the African-American community and other communities of color, as they do against ours.”

Indeed, Jewish communities should be leveraging their relationships with the police to achieve reform goals, said Nate Looney, who is a recruiter for Jews of color at Avodah, the Jewish service corps group, and who previously served eight years in the military police.

“How powerful would it be for a Federation to say, we aren’t willing to kick in money to the police association of whatever, until you do X, Y and Z,” he said.

For the Jewish communities that are coming to grips with policing, rabbis and leaders say it cannot happen without having Jews of color at the table leading the discussions. Part of the process is showing white Jews that black communities need public investment that can provide the sorts of services that Jewish organizations have been providing their communities for more than a century, said Koach Frazier, the rabbinical student and activist leader.

“To me what’s so interesting is that the whole purpose of the Jewish Federation is to fund community efforts that were outside of the purview of the state,” said Frazier, who supports defunding police. “It was because of generational institutional wealth that that’s been able to continue. Black people never had that.”

But while the protests have brought new urgency to the question of American policing, Rabbi Sandra Lawson, a black rabbi and the associate chaplain for Jewish life at Elon University, said she is concerned that Jews will forget about the importance of this issue when the country becomes calmer.

“Right now, because this is so horrible, you have an outpouring from everyone,” Lawson said. “But when this settles down, the Jewish community has not moved far enough to recognize that if you’re black or brown you could also be Jewish, and this could easily happen in our own community.”

Black Jews to white Jews: Change your relationship with police