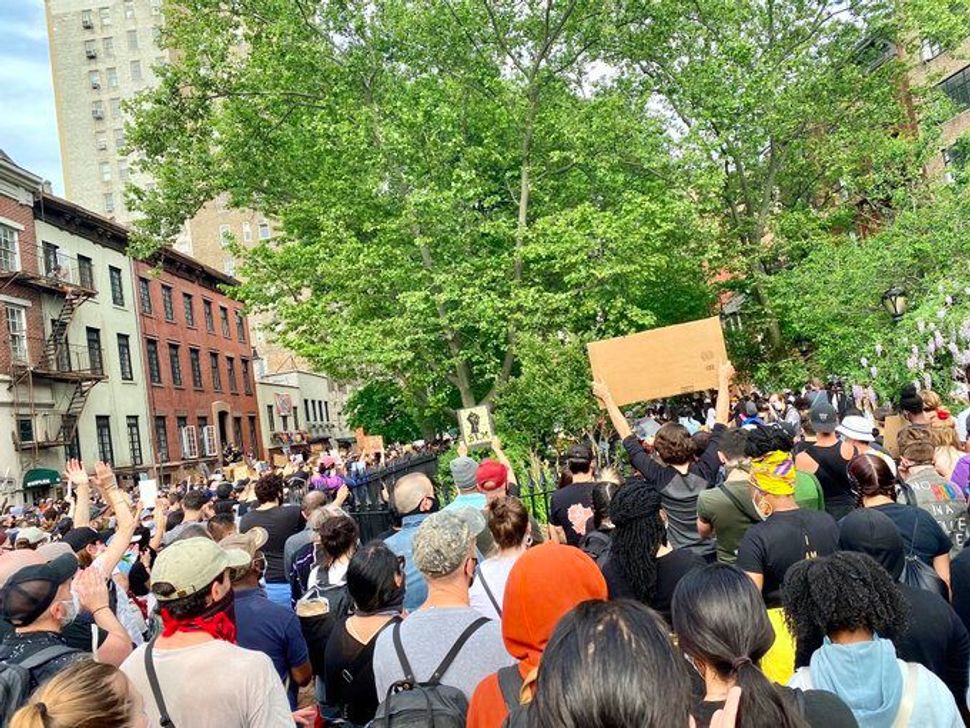 A peaceful rally outside the historic Stonewall Inn. Image by Jason Rosenberg

Jason Rosenberg went out Tuesday night to protest in New York City. He returned home Wednesday morning with staples in his head, a broken arm and a summons. A program manager at the 92nd Street Y and an activist with ACT UP, he’s now trying to heal and considering legal action against the NYPD. This is his account of the night, lightly edited for clarity. A video in the following article shows blood and injuries.

I was with two friends at the Stonewall Inn for a demonstration highlighting black trans and gender-nonconforming victims of violence — specifically Nina Pop, a black trans woman who was stabbed, and Tony McDade, a black trans man who died at the hands of the Tallahassee police. The organizers of the rally didn’t plan a march because of de Blasio’s curfew time. But afterwards splinter groups went in different directions.

As it got later, tensions were rising in the group, and there were some smashed windows and looting. It wasn’t what some of us had signed up for, so we decided to head back. But we ran into some friends in another splinter group, and because we were together we felt comfortable and confident enough to put ourselves on the line and get arrested.

The march was very peaceful. We even had chants that said, “This is a peaceful protest.” But when we got to Union Square and Fifth Avenue, the police started escalating force. They started pushing protesters and there were isolated arrests. That made protestors confront the police, because we want to see and document who’s getting arrested.

A lot of us on the outskirts of the group linked arms. Usually, when protesters do that it means they’re not resisting arrest, and usually a trained cop would know what that looks like. They did not respond that way. They started beating us while we were linked. I was pushed down to the ground by force and it was physically impossible to resist arrest, but they kept beating — with a baton, with their fists, with their bodies, with their legs. My glasses and my mask fell off. And then I looked up and there was just a pool of blood around me.

Then I was finally put into zip ties and pulled to an area where all of us were waiting to be picked up in police vans. There was a young black man near me who I think hit his head; he passed out and started puking. Only after he passed out did they finally gave him medical attention.

We waited 45 minutes for a van and then drove for over an hour, first to a precinct on Atlantic Avenue and then, because it was full, to one in Red Hook. At the time I couldn’t tell that something was wrong with my arm, but the ties were so tight I couldn’t feel my hands, I thought I might pass out. There was a medic who was arrested with us, he knew I needed medical attention. When we were put in a room at the precinct he was banging on the door, trying to get their attention and say that I needed to be released and go to the emergency room. The only thing they did at the precinct was to wash my face.

At 2 a.m. we were released and my roommate took me to the emergency room and the orthopedist. I had a broken humerus and got nine staples in my head. By the time I was done, it was light out.

The pain progressed throughout the night; I didn’t realize at the time how severe it was. But there also came waves of grief for what had happened. It was very sobering to relive it, and to think that if I’m a white dude protesting and this is the response, what is it for black and brown people?

We finally made it home. Luckily the ER was wrong in saying I need surgery. A broken humerus with a brace, 9 staples, and some scrapes. Let’s start the healing and keep protesting from home. pic.twitter.com/Yzt6S9eIp6