Anti-racism protests sparked by the death of George Floyd swept through England over the weekend. Image by (Via Twitter)

In the fortnight since George Floyd perished under the knee of a Minneapolis police officer, Britain has been swept by an anger to which large sections of the population are not accustomed.

As in every other country in the western world, people have taken to the streets here to demonstrate against racism and police violence. This weekend’s protests were loud but mostly peaceful, even when protesters in Bristol tore out the controversial statue of a 17th century slave trader from its pedestal and threw it into the nearby canal.

Bristol just made History by taking down the Colston Statue during the #BlsckLivesMatter protest.
Edward Colston was a Slave trader of the royal African company. #BLM #BristolProtest pic.twitter.com/FU4Slqx5pl

But there is something less evident going on in parallel: many people are having uncomfortable conversations about race within families, among friends — and in Britain’s Jewish community, which has far fewer black members than other countries.

Britain’s Jews are far smaller in number, of course, than their U.S. counterparts. They are not even the largest community in Europe — that distinction falls to France — but they do have the raw, unwelcome experience of dominating the recent news agenda in their home country.

It is barely two months ago when Jeremy Corbyn, as leader of the Labour Party, was at the head of a movement that tolerated hatred of Jews in its ranks with often breath-taking indifference. His failure to tackle antisemitism, something that at its root should have been little more than a human resources problem, contributed to a heavy defeat in last December’s election.

Things have changed quickly since then. The party’s new leader, elected in April, has begun a rapid program of detoxification and members of the old regime have withdrawn into the shadows. And the speed at which the coronavirus pandemic came to dominate lives here meant the national conversation has moved on — but the experience remains raw for many British Jews. Opinion polls had shown at the height of the crisis that some would even consider leaving the country if Corbyn became prime minister. For them, it is not easy to forget.

Labour’s antisemitism crisis, the speed with which it surfaced, and the many years it will take to fully weed out is why many British Jews say they empathize with British black people.

“I can’t begin to imagine how exhausted you are talking about it,” said Raymond Simonson, chief executive of the London-based Jewish community center JW3, on a Zoom panel it organized Sunday to discuss Floyd and racism. Participants included black British academics, activists and politicians.

Simonson continued: “I know as a white leader I can’t always turn to black people and say, ‘You have to give me the answers’. I know I have to do more, I have to read more, and learn more, and listen more. “I know how exhausted I was for the previous two years talking about antisemitism anytime anybody wanted to have a conversation with me.”

Panelist David Lammy, a member of parliament representing a racially diverse district of North London, said British Jews and blacks should be able to work together based on a shared history of discrimination.

When black migrants arrived in Britain in the 1950s, attracted by the offer of low paid but stable jobs, many were turned away from rented accommodation with a notorious sign: “No blacks, no Irish, no dogs”. Lammy said his father only found somewhere to live when he applied to Jewish landlords.

Lammy called that anecdote a sign of “a united struggle that the black community — particularly those who have been colonized and those who are the descendants of enslaved people — and the Jewish people have had.” But empathizing with another community’s problems is not the same thing as absorbing them. Another panelist, the journalist Nadine Batchelor-Hunt, spoke vividly of her experiences being a British minority within a minority — a black Jew.

“It’s really hard, honestly, being a black Jew in the UK because there so few of us,” she said. “Just to give you a silly example, sometimes when I need to go to a kosher shop I feel a bit awkward about going because I know I might get stared at. I think one of the things that the Jewish community can do is to educate kids and their communities in the fact that there are black Jews and that we do exist. It seems there’s this weird thing in the UK where we talk about the existence of black Jews in Israel or far away, as if we don’t have black Jews here.”

It is a question, the civil rights activist Simon Woolley said, that British Jews needed to honestly put to themselves. He said he knew “instinctively” that the two black Jewish women on the panel are “cutting hellfire every single day on so many different levels. It pains me.” 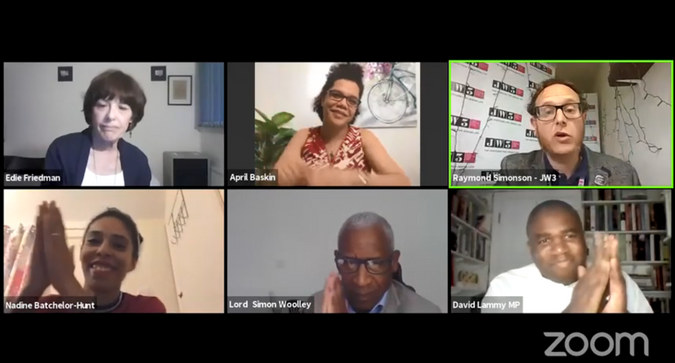 Speakers discuss racism on a June 7 Zoom panel organized by the London-based Jewish community centre JW3. Image by (via Zoom)

“Straight, honest, brutally honest. You have to get your home right first.”

That conversation will be arduous because Britain’s Jewish communal bodies, having closed ranks in the face of populist antisemitism, is squeamish about confronting the community on its own sensitivities.

Israel is one such topic. The country’s oldest communal body, the Board of Deputies, has for years deftly avoided any critical comment on controversial matters like Benjamin Netanyahu’s corruption trial or the prospect of West Bank annexation.

In January there were howls of protest from synagogues over its plans for a mere survey of members’ views on Israel — the exercise was hastily abandoned.

It is just one reason why, for all the warm words of encouragement and solidarity expressed in Sunday’s JW3 panel, Britain’s Jews have a long path to tread towards brutal honesty.

Michael Daventry is a British-Turkish journalist based in London and until April 2020 was the foreign editor of the Jewish Chronicle.