Jewish protesters blast shofar at rallies across the country 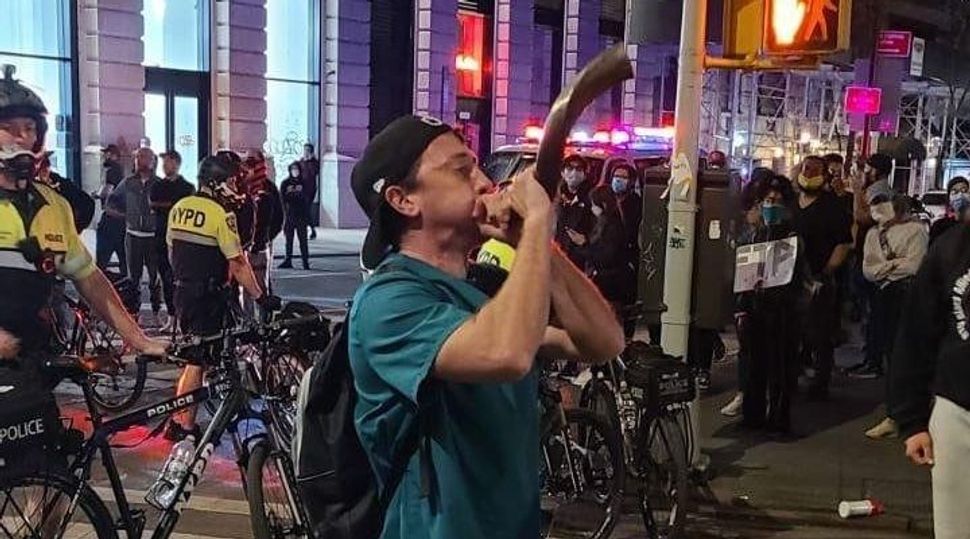 A man blows a shofar at a protest in New York City. Image by Dan Schori

Rabbi Ariel Stone stood at the protest with a gas mask hanging around her neck, a megaphone in one hand and a shofar in the other.

Gathering with the Portland Clergy Interfaith Resistance on Sunday, Stone, a longtime human rights advocate and leader of Portland’s Congregation Shir Tikvah, called for an end to the use of tear gas on peaceful protesters. Lowering her face mask, which was emblazoned with a star of David, she blew the four-foot-long ram’s horn to cheers from the crowd that had gathered outside the county’s courthouse building.

Stone blew the shofar, she said, “because this is a time of Earth-shattering importance,” the Oregonian reported.

During the Jewish High Holidays, the sound of the shofar announces the opening and closing of the Gates of Prayer, and marks the season of personal reflection. But over the past two weeks, the shofar has sounded a different spiritual call: as part of the soundtrack of protests over institutional racism sparked by the police killing of George Floyd.

Rabbi Jill Jacobs, executive director of T’ruah: The Rabbinic Call for Human Rights, noted that her organization’s logo and name are inspired by the shofar, and its role as both a wake-up call and the way to usher in the jubilee year described in the bible, when debts are forgiven and land lies fallow.

“The three sounds of the shofar contrast the brokenness of the world with the possibility of a world made whole,” Jacobs wrote in an email. There is t’ruah, nine staccato bursts; shevarim, three short blasts; and tekiah, the climactic, unbroken roar the shofar is best known for.

Members of the interfaith group pic.twitter.com/IlV7koUUG3

them: how is the protest going? me: shofar, so good pic.twitter.com/NFnzyox9ZB

Shofars have made appearances in protests in New York; Lexington, Mass.; Chattanooga, Tenn.; and Napa, Calif.. In Evanston, Ill., one Jewish doctor sounded the shofar to end a silent vigil of eight minutes and 46 seconds — the amount of time Derek Chauvin, a former Minneapolis police officer, pressed his knee to George Floyd’s neck, causing Floyd’s death.

In mainstream Judaism, shofar-blowing was on the decline around the turn of the 20th century, because assimilated Jews, especially in the Reform movement, considered it a primitive relic of Judaism, according to Jonathan Sarna, a professor of American Jewish history at Brandeis University. But the shofar staged a comeback, and became a common enough Jewish symbol for many families to display in their homes. It has been seen in protests since the civil rights and anti-war demonstrations of the 1960s.

In New York on June 4, one photographer captured an image of a handcuffed protester on the ground while the police officer arresting him holds what appears to be the protester’s shofar.

There was a guy blowing a shofar at the peaceful Gracie Mansion protest last night. This was one of the first pictures I saw when I got home. pic.twitter.com/1BXMizbpX0

Simran Jeet Singh, New York University’s Sikh chaplain and a religion commentator, posted a video of the protester’s arrest, noting that they knocked his shofar to the ground.

“as i looked at it, i couldn’t help but see it as my own turban on the ground,” Singh wrote on Twitter. “so infuriating and inhumane and disgraceful.”

witnessed nypd tackle and detain this peaceful protestor. they seized his bike and knocked his jewish shofar to the ground.

as i looked at it, i couldn’t help but see it as my own turban on the ground. so infuriating and inhumane and disgraceful. pic.twitter.com/luskImhq0K

Most Jews have only seen a shofar within the confines of a synagogue or a prayer service, but for decades now, activists, composers and musicians have been exploring the sounds and symbolism of the shofar outside strictly liturgical contexts.

In “West Side Story,” the shofar heralds the coming reckoning of the final fight between the Jets and the Sharks. Avant-garde composers and Jewish punk bands use the shofar to create a bridge between tradition and their contemporary expressions of Judaism.

The shofar is also a symbol of reckoning for evangelical Christians; in 2016, members of an armed militia group occupying federal lands in Oregon blew shofars as a call for rebellion.

“CHRISTIANS THE BATTLE TRUMPET HAS BEEN SOUNDED TIME TO RISE! CALL TO ACTION SEND IN THE TROOPS TO STAND WITH US IN BURNS OREGON!” one of the militia members wrote in a post on Facebook accompanying a video of the shofar blowing.

Like T’ruah, other Jewish groups have seized upon the shofar as a wake-up call. In April, the Jewish environmentalist group Hazon organized a mass shofar blowing for Earth Day.

“We blow shofar at a time of celebration; at a time of alarm; and as a call to teshuva, to repentance and to changing our behaviors,” Nigel Savage, Hazon’s CEO said at the time.

More than 1,000 people participated remotely, Hazon says on its website.

Jewish protesters blast shofar at rallies across the country