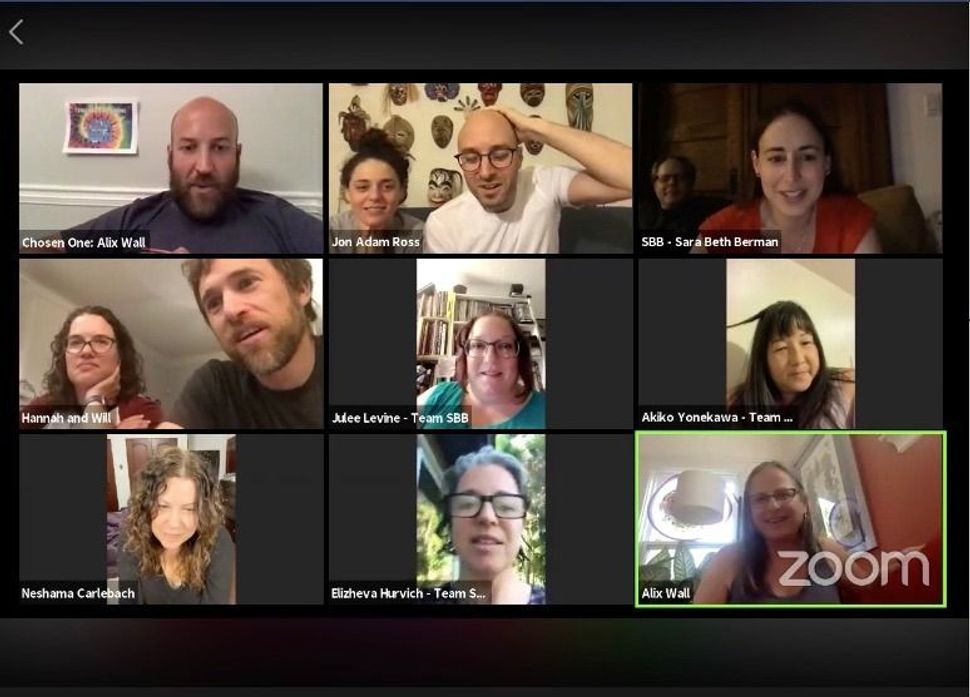 Of all the quarantine-created phenomena – Zoom cocktails, Zoom seders, Zoom dating – here’s one you may not have heard of yet: Jewish Geography Zoom Racing.

The seventh episode, which has racked up a respectable 3,000-plus views ran on Facebook Live last weekend. In it, two competitors go head-to-head. Sometimes they know each other, sometimes they don’t. Host Micah Hart discloses the name of “The Chosen One” at the beginning of the show, then the contestants use their own networks to find that person. But rather than just text their friends and ask if they know her, they have to persuade each person to join a Zoom call. No information can be exchanged except over Zoom. Each person brings another onto the Zoom call, until the winner finds The Chosen One.

“A lot of people have said to me that this is a great way for them to escape during the quarantine, and that’s exactly what it’s meant to be,” said Hart, Jewish Geography Zoom Racing’s creator.

Hart, a social and digital marketer in Atlanta, is the founder of the Campfires and Color Wars podcast, on which guests reminisce about their favorite camp memories. In the Jewish world, his connection to camp runs deep. His father is Macy Hart, who was director of the Union of Reform Judaism’s Henry S. Jacobs Camp for 30 years and founded the Museum of the Southern Jewish Experience (now part of the Goldring/Woldenberg Institute of Southern Jewish Life). The game is a family affair, since Micah’s sister Hannah Hart Martin and her husband Will Martin are also on the call. Hannah minds the Facebook Live comments, of which are there are many.

“When I read the comments after our episode, it was like people commenting on a presidential debate,” said Jon Adam Ross, a recent contestant. “As if the stakes were so high.”

Micah Hart came up with the idea in the pandemic’s early days after seeing ESPN2 “Always Late” host Katie Nolan use her network to try and get as many celebrities as possible on one Zoom call. Given Jews’ propensity to play Jewish geography – which in Hart’s mind, often leads back to which summer camp they went to – his mind started churning with the Jewish version, and the game was born.

“It’s something we can all play along with, and have fun while we have to sit at home and find ways to entertain ourselves,” he said.

Not to mention that unlike in normal times, when you call or text someone right now on a Saturday night, they’re likely to be home.

I asked Hart if, for research purposes, I could be The Chose One. On episode 5, I sat by my computer watching and waiting. Ross, founder and managing director of The In[heir]itance Project, an interactive theater company and Sara Beth Berman, who works in professional development for UJA-New York, called upon their networks to find me. While it usually takes around 40 minutes to over an hour to find The Chosen One, it only took 21 minutes to find me. Ross’s first friend to join wasn’t someone I knew, but she happened to be on a Zoom call with someone I do: singer Neshama Carlebach.

Ross said my name enough times to his friend that Carlebach heard it. She finally agreed to get on the call, while Berman’s friend reached someone who knew one of my most well-connected friends. Both she and Carlebach attempted to send me the Zoom link within seconds of each other, making for a rather tense finish. The surprise factor is partially what makes it fun, Hart said. In addition to Carlebach, New York Times columnist Bari Weiss has also been called upon.

For Ross, the game exemplifies “this unique tightness of the Jewish community and the relationships we have and the complete comfort with inappropriate contact we have with each other. You can call someone who’s Jewish at 11 at night, even if you know they go to bed at 7.”

To watch Jewish Geography Zoom Racing, “like” Campfires and Color Wars on Facebook to get announcements about the next game.