Coronavirus leads to a boom for Tivnu domestic gap year 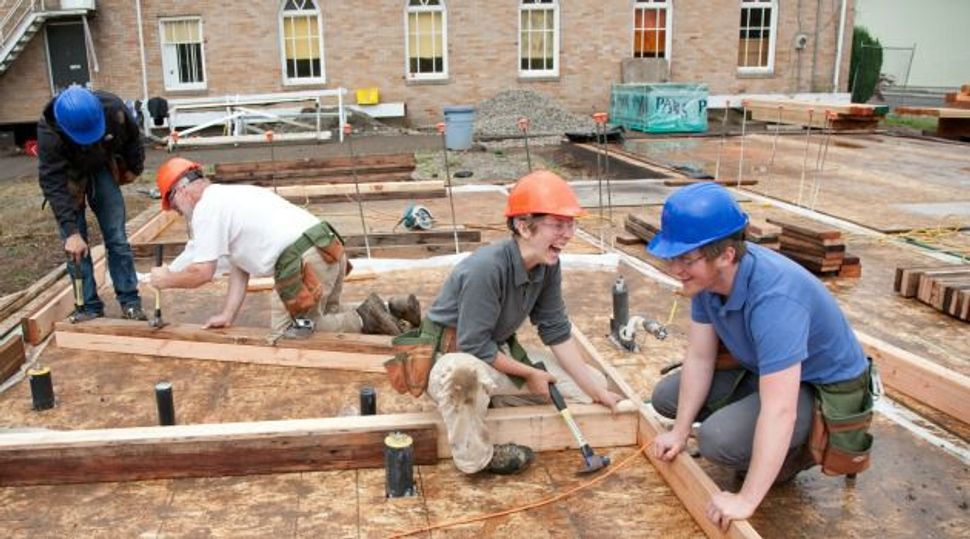 Power Tools: Participants in Tivnu?s week-long program, a predecessor to the gap year, saw lumber for a housing project. Image by tivnu

By her junior year of high school, Bella Saunders already knew that she wanted to take time off before college and apply her “skills, passions and Judaism” to a non-academic setting. But when the coronavirus pandemic disrupted her senior year at Atholton High School in Columbia, Md., the 17-year-old Saunders became even more certain of her decision to participate in Tivnu: Building Justice, a social justice-themed Jewish gap year program in Portland, Ore.

“I didn’t want to start college immediately anyway but even more so now, thinking about school being mostly online when it should be about all these experiences you’re having on campus,” she said.

This September, Saunders will become part of the largest cohort to date in Tivnu’s seven years as a gap year program. With coronavirus creating upheaval in educational programs worldwide, Tivnu seems to be having a moment as American Jewish high school graduates debate what to do with their lives during uncertain and economically challenging times.

Tivnu, which means “Build!” in Hebrew, offers hands-on experience with multiple Portland-area social service organizations, ample Jewish learning opportunities, nature trips and a crash course in communal living. Since its inception, it has served as a distinct alternative to heading straight to college, Israel gap year programs and both international and domestic gap year experiences outside the Jewish world.

But when the most recent cohort had to return to their homes prematurely in March, Tivnu began receiving “a marked increase in interest,” said Steve Eisenbach-Budner, Tivnu’s founder and executive director.

Eisenbach-Budner and his staff have fielded dozens of inquiries from prospective participants and their parents living all over the country. “For a lot of young people, a gap year was not on their agenda, but with COVID, they started thinking differently. Either their college will run in an attenuated way or virtually so a lot of them are exploring other options,” said Eisenbach-Budner.

Eisenbach-Budner also credited Tivnu’s rising national visibility to a recent New York Times Op Ed by Tivnu board member William Deresiewicz, who wrote about the increased relevance of domestic and social justice-minded gap year programs in an era that has only illuminated “existing inequalities” in the U.S. For Saunders, reading that article “solidified my decision because it talked about all the work there is to do at home. So even if some of the internships will be remote or the community will be smaller, I’m so excited to do this program,” she said.

According to Tivnu’s staff, Saunders’ cohort will number somewhere between 20-30 people and require at least two or three houses. In previous years, a Tivnu cohort averaged about nine participants living together in one house. And while some aspects of the program won’t require much corona-era modification, other parts necessitate considerable contingency planning.

“We are hoping for the best and planning for the worst,” said Adinah Miller, Tivnu’s program director. “We don’t know yet if our participants will have to quarantine when they arrive. But every year, our participants live together like a family and learn how to maintain a healthy community. So now, we need to also wrap into that how to wipe down doorknobs and washing your hands frequently.”

Typically, Tivnu participants work two to three different internships each week, which can include building tiny houses with the homeless, working in a community garden, serving healthy food for people in need or answering prison letters and visiting prison inmates through the Criminal Justice Reform Clinic at Lewis & Clark Law School.

“I bring Tivnu interns wherever I bring my law students,” said Aliza B. Kaplan, the clinic’s director. “They definitely get substantive experience and even if they don’t become lawyers, they’ve had an opportunity in a real-world way to understand criminal justice issues.”

Miller, who works with each participant to create an individualized internship schedule, foresees that the outdoor internships will continue with fewer modifications while some of the office internships will be conducive to remote work. Internships in shelters and schools, however, remain up in the air.

“We’re asking everyone to be flexible and we believe that Tivnu still has a tremendous amount to offer even if it means doing things differently than we’ve done in the past,” said Miller.

Fortunately, Tivnu has always been receptive to adaptation and evolution. Before focusing on the gap year experience, Eisenbach-Budner launched Tivnu in 2011 with daylong workshops that combined construction projects with Jewish learning and social action, inspired by his experiences working as a construction coach for at-risk youth with Portland YouthBuilders. “I had wanted to help young people in the Jewish world understand the systemic nature of poverty and injustice in this country,” said Eisenbach-Budner. “And the gap year was what I always had in mind.” Raised in New York City, Eisenbach-Budner grew up in Penn South, a venerable affordable housing complex populated by “Communists, neoconservatives, Democrats and Jews all fighting with each other. It was not always pretty, but I grew up with this incredible civic engagement,” he recalled. “It was impressed upon me at a young age that when people organize, they can make tangible and significant differences in people’s lives.”

Eisenbach-Budner also spent Jewish holidays with Orthodox relatives and served as national president of Young Judea, the Zionist, pluralistic youth movement that now bills its Israel course as the “original gap year program.” After participating in Young Judaea’s Israel course, Eisenbach-Budner did two more stints of living in Israel, which included work on construction sites with Palestinians as co-workers. He eventually settled in Portland, where his work as a carpenter led him to Portland YouthBuilders.

All of these influences and experiences, he said, created Tivnu.

“Fast forward to 25 years after I did Young Judea’s Year Course and I was asking myself, ‘how can I help young Jewish people wrap their idealistic, caring about the world selves with their Jewish selves and why should there only be these kinds of programs in Israel?’’’ he said. “Why not do a program in the U.S., where these young people will be building their lives?”

In its first year as a gap year program, Tivnu remained construction-focused but Eisenbach-Budner and his staff quickly realized that they needed to expand Tivnu’s offerings.

“Don’t we want to engage the teen who wants to do social justice work but not construction? Early on, we pivoted to having different kinds of internships available,” said Eisenbach-Budner, who still encourages participants to at least try construction as a way to “gain some skills in the physical world.”

Zoe Schacter-Brodie, a Tivnu participant in 2018-19, had opted out of construction but spent almost every day working at an elementary school serving mostly low-income children. Now 20 and a student at Whitman College, Schacter-Brodie said she continues to feel “the impact” of Tivnu on her life, both academically and interpersonally. Because of Tivnu, “I’ve learned how to assert myself and coexist with people who have very different habits than me,” she said.

Whatever the future holds, Eisenbach-Budner believes that Tivnu “will be more needed than ever. Pre-COVID we were cognizant of the fact that tens of millions of people in the U.S. don’t have their basic needs met, and the economic conditions will be even more dire post-COVID.” Tivnu participants, he said, “ learn what we as Jews have to contribute.”

Coronavirus leads to a boom for Tivnu domestic gap year