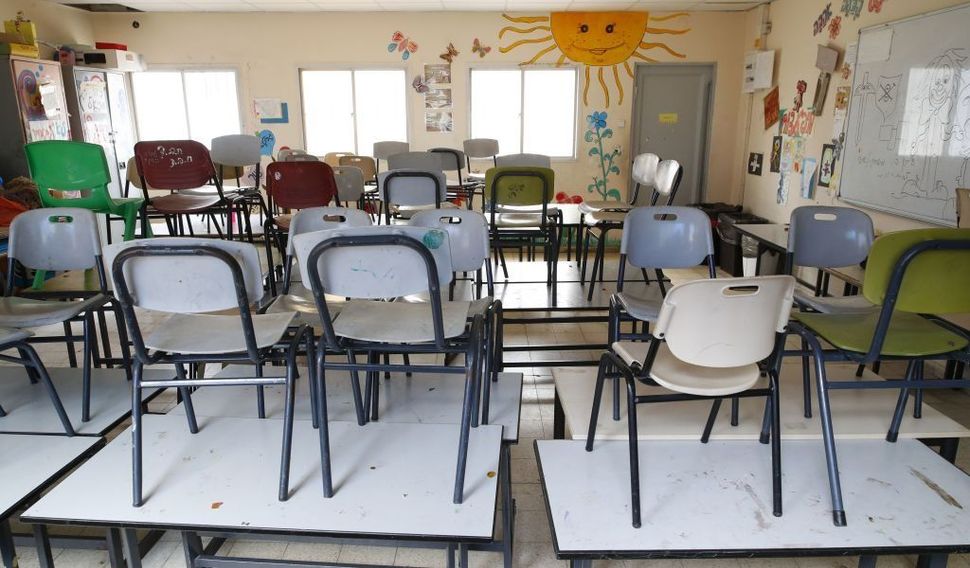 A picture shows an empty classroom at a school in the central Israeli coastal city of Netanya, a day after an announcement made by the Israeli prime minister of the closure of schools and universities as a preventive measure to limit the spread of the coronavirus COVID-19, on March 13, 2020. Image by JACK GUEZ/AFP via Getty Images

“Put on your masks,” a security guard instructed backpack-wearing adolescents Sunday morning as they streamed into their middle school in in northern Tel Aviv. They lined up to show him the signed declarations by their parents that they are fever-free.

When one maskless boy said he forgot his, the guard shouted, “Anyone have a spare mask for him?”

Two blocks away, the gates were locked at the high school campus of the school, called Ironi Daled. No students would arrive Sunday, Monday — or for the next two weeks. An 11th-grader at the school tested positive for Covid-19, according to a notice released Saturday night, so all staff and students at the high school were immediately placed in quarantine.

Will Israel really annex the West Bank (and what happens next)? Join Jodi Rudoren, editor-in-chief of The Forward, on June 17 at 11 a.m. EDT for a conversation with David Makovsky of the Washington Institute for Near East Policy and Khalil Shikaki of the Palestinian Center for Policy and Survey Research. Click here to sign up.

It’s one of at least 140 Israeli schools that have closed down in recent days because a student or staff member has contracted Covid, reflecting a resurgence of cases across Israel in recent weeks following the reopening of schools, shops and other businesses. Infection numbers soared from low single-digits to as high as 200 a day last week.

The country’s schools reopened abruptly in mid-May, after plans were shelved for a gradual reentry in which students were meant to meet in “capsules” of 15 to provide adequate room for social distancing. Instead, most returned to classrooms of 30 to 40 students where the education-ministry guidelines to sit 6.5 feet apart were impossible to follow. Enforcing rules to wear masks appeared spotty at best. 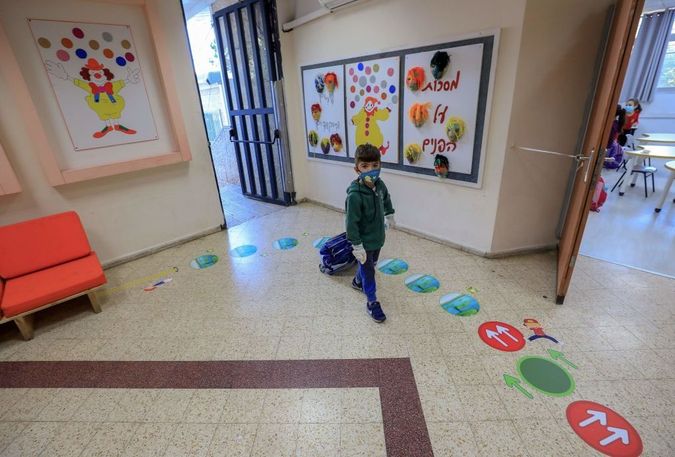 An Israeli pupil wearing protective gear heads to his classroom upon return to school after the COVID-19 lockdown, at Hashalom elementary in Mevaseret Zion, in the suburbs of Jerusalem, on May 3, 2020. Image by EMMANUEL DUNAND/AFP via Getty Images

Israeli parents have been left to navigate the risk factors for their own children.

“There was a rush to open everything, but it felt like it was done without any real plan,” said Yochai Bar Sinai, 38, a computer programmer who lives in Jerusalem and has three children. The oldest attends an elementary school that was shuttered after a teacher tested positive.

Bar Veinstein, 48, a Tel Aviv father and chief executive of a software company said he understands the economic pressure to reopen, but sees Israeli schools as something of a cautionary tale for other countries looking to reopen schools, citing what he called sloppy enforcement of health guidelines here.

“We went from one extreme (of lockdown) to the other of doing nothing, it’s just nonsense,” he said.

Mili Neeman, a 42-year-old Tel Aviv business consultant, decided to keep her daughter, a seventh grader, at home despite school’s reopening. She found the situation too risky once she saw, she said, that social-distancing and mask-wearing rules were not strictly enforced.

“I feel that at times like this it’s our job as parents to use our instincts and think for ourselves,” Neeman said. “Just because the government decided to open schools again does not mean it’s the right decision for everyone.

“Going from zero to 60 in one day and not enforcing rules in the school – leaving it up to principals to decide how to arrange everything allowed the principals to say, ‘It’s difficult for us to abide the guidelines,’” she added

An education-ministry official who spoke on the condition of anonymity, acknowledged that enforcing the guidelines given to schools has been challenging, which is why principals have been given discretion.

In Pardes Hannah, a town in central Israel, Michal Avrahmi, has been frustrated by the handling of the post-lockdown return to the K-12 school her two sons attend. She attended a recent meeting between administration and parents by Zoom to discuss the health guidelines, where she, along with other parents complained that the school was functioning as if it was in “non-Corona times”.

“There’s a sense of chaos,” said Avrhami, 49, a graphic designer. “And then the straw that broke the camel’s back is when we heard two girls in the high school were exposed to someone with Corona. We received word from another mother in the school, but it turns out that the school administration knew the day before.”

She described a breakdown in trust of the government, especially after reports of both Prime Minister Benjamin Netanyahu and President Reuven Rivlin breaking quarantine rules over Passover.

“I don’t know who to believe,” she said. “I’ve stopped believing what the government ministers tell us since they told us to have Passover seders on our own and then did not follow their own rules and had the holiday with their relatives.” 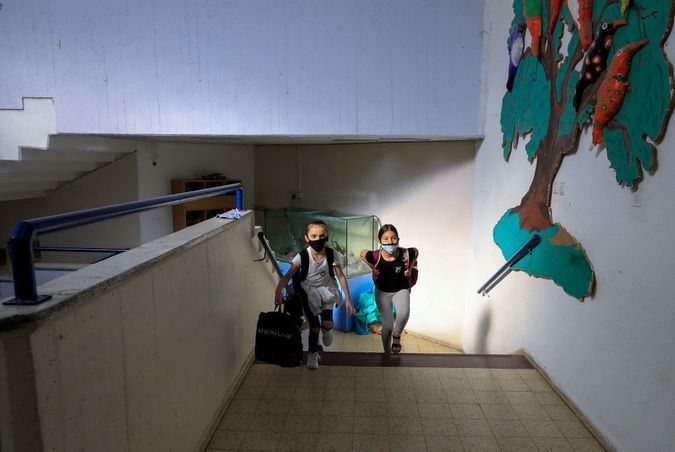 Israeli pupils wearing protective gear make their way to their classroom upon return to school after the COVID-19 lockdown, at Hashalom elementary in Mevaseret Zion, in the suburbs of Jerusalem, on May 3, 2020. Image by EMMANUEL DUNAND/AFP via Getty Images

This new level of concern accompanying the uptick in cases comes after Israel emerged from the initial phase of the Corona crisis better off than many of its neighbors in Europe and to the devastating death toll and infection levels in the United States. To date there have been more than 19,000 cases and 302 deaths out of a population of 8.6 million.

Israel went into stringent lockdown by mid-March, and for weeks residents were limited to a 328-foot radius of their homes, except to visit grocery stores or pharmacies. An emergency order enabled the Israeli government to track cellphones for contact tracing.

Because the infection rate was so low when schools reopened a month ago, it was not considered overly risky. A parallel reopening of schools and businesses in Europe has not led to a spike in cases.

European Union education ministers attribute the lack of a significant rise in cases to having smaller class groups and close cooperation with health services to enforce restrictions like social distancing.

Hagai Levine,an epidemiologist and professor of public health at Hebrew University in Jerusalem said that so far, it does not appear that Israeli schools themselves are major centers of infection or spreading of the virus.

But he said there needs to be much broader change in people’s behavior.

“In Israel we are a very warm society that lives closely together, shaking hands, hugging — we need to change that, and it’s not easy,” Levine explained. “We also need to learn how to live with masks. This is not easy in Israel, especially during the extremely hot summer.”

Dina Kraft is a journalist based in Tel Aviv. Listen to her podcast about relationships between individual Israeli Jews and Palestinians, The Branch, produced by Hadassah.