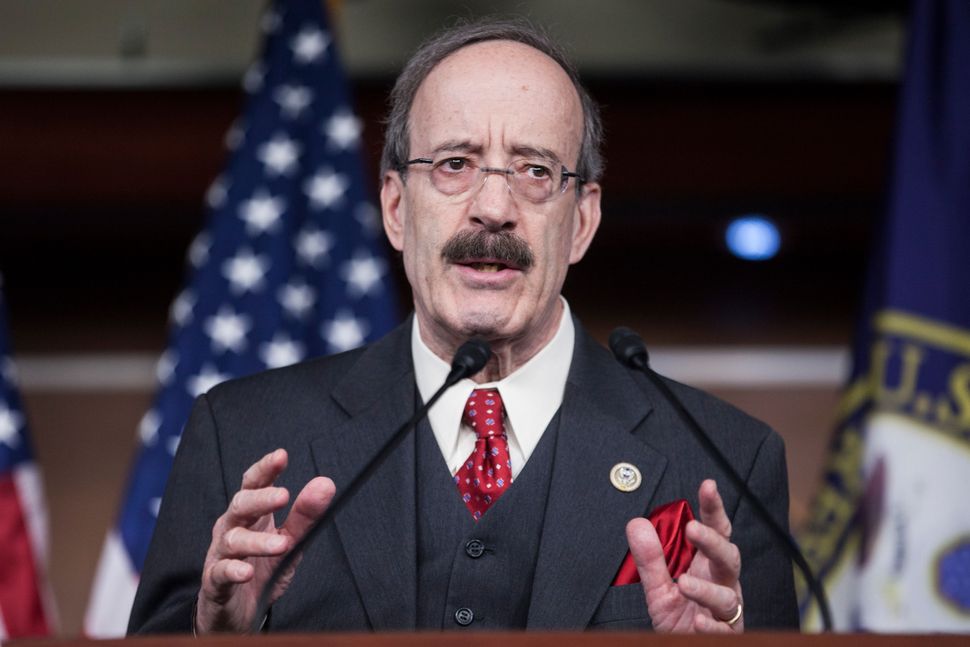 Rep. Eliot Engel, the chair of the House Foreign Affairs Committee and one of the top congressional allies of the Israeli government, is expected to lose his primary.

With more than 33,000 in-person votes cast in New York’s 16th District, containing parts of the Bronx and Westchester County, progressive challenger Jamaal Bowman was beating Engel 61%-35%. While the final result cannot be declared because absentee ballots will not be counted until next week, Dave Wasserman, a respected analyst for the Cook Political Report, tweeted Wednesday that he expected Bowman to emerge victorious.

If elected, Bowmaan will join the small but growing group within the Democratic caucus willing to put conditions on assistance to the Israel Defense Forces. But the rest of the New York primary results indicate that the victorious incumbents, as well as other newly elected members, will likely keep to the party’s status quo on the Jewish state.

In response to an open letter from Rabbi Avi Weiss, an influential Bronx Orthodox leader, Bowman wrote in an op-ed for the Riverdale Press that he was supported Israel’s right to exist and was opposed to the boycott-Israel movement known as BDS, but also supported activists’ First Amendment right to boycott. He also connected the nationwide protests against police brutality to the Palestinian experience.

“The uprising we’re witnessing across the country against police violence also makes me empathize with the everyday experience and fear that comes with living under occupation,” he wrote. “Just as the police force is a violent intimidating force in so many black communities, I can connect to what it feels like for Palestinians to feel the presence of the military in their daily lives in the West Bank.”

Engel, who has served in the district for 31 years, was expected to have his toughest primary re-election campaign in recent memory. The 73-year old incumbent, who is white and Jewish, represents a district that is “majority-minority” — only 46% white. (The district is also 12% Jewish) Bowman, an African-American middle school principal who was endorsed by progressive leaders like Sen. Bernie Sanders and Rep. Alexandria Ocasio-Cortez, portrayed Engel as out of touch with his district.

Engel made a series of unforced errors throughout the campaign that helped reinforce Bowman’s argument. When the coronavirus pandemic began, he stayed in his home in the Washington, D.C. suburbs for months rather than returning to New York (Engel argued that his committee work required him to be close to the capital).

And this month, after returning to the Bronx, he was caught on tape repeatedly telling a fellow elected official at a press conference that he wouldn’t have come if he wasn’t running for reelection. “If I didn’t have a primary, I wouldn’t care,” he said twice.

Although foreign policy was not a top priority for most voters in the district, Jewish and Israel-related organizations spent millions of dollars and hundreds of volunteer hours supporting both candidates.

Engel, one of only 19 House Democrats to oppose the Iran nuclear deal in 2015, was backed with more than $1.5 million in ads by Democratic Majority for Israel, plus more donations facilitated by the AIPAC-tied group Pro-Israel America.

Bowman, who supports putting conditions on American military aid to Israel, utilized volunteers from the political action committees of IfNotNow and Jews for Racial and Economic Justice.

“This is a seismic victory for the constituents of NY-16, for the progressive movement, and for advocates for freedom and dignity for both Palestinians and Israelis,” IfNotNow political director Emily Meyer said in a statement.

To what extent Engel’s loss is due to his hawkish views on Israel or on local factors will likely be debated for weeks in Jewish political circles. Other results in New York do not demonstrate much change to the Democratic party’s status quo on Israeli-Palestinian issues: supportive of Israel’s defense needs but opposed to annexation of the West Bank and other steps that make a two-state solution harder.

In the 9th District in Brooklyn and 10th District on Manhattan’s West Side, two Democratic longtime incumbents with close ties to local Jewish communities, Yvette Clarke and Jerry Nadler, cruised to reelection against progressive challengers. But in the 12th District on Manhattan’s East Side, 14-term Rep. Carolyn Maloney was up by only 500 votes against progressive challenger Suraj Patel with thousands of absentee ballots yet to be counted. Patel told Jewish Insider in April that he would defend Israel “in the same way” Maloney had.

Two wide-open races in open seats, each of which had at least seven candidates, painted a similar picture. If results stand, Ritchie Torres in the Bronx-area 15th District and Mondaire Jones in the 17th District in suburban Rockland and Westchester Counties will both be the first openly gay black men elected to Congress (Torres is also Latino). Torres has attended the AIPAC Policy Conference and the Israeli embassy’s LGBTQ Pride celebration, while Jones was supported by J Street.

Engel’s replacement to lead the House Foreign Affairs Committee is expected to be Rep. Brad Sherman of California, another pro-Israel stalwart. If Bowman co-sponsors the main bill putting conditions on American military aid to Israel, he will raise the number of supporters from 24 to 25 – 10% of the House Democratic caucus.