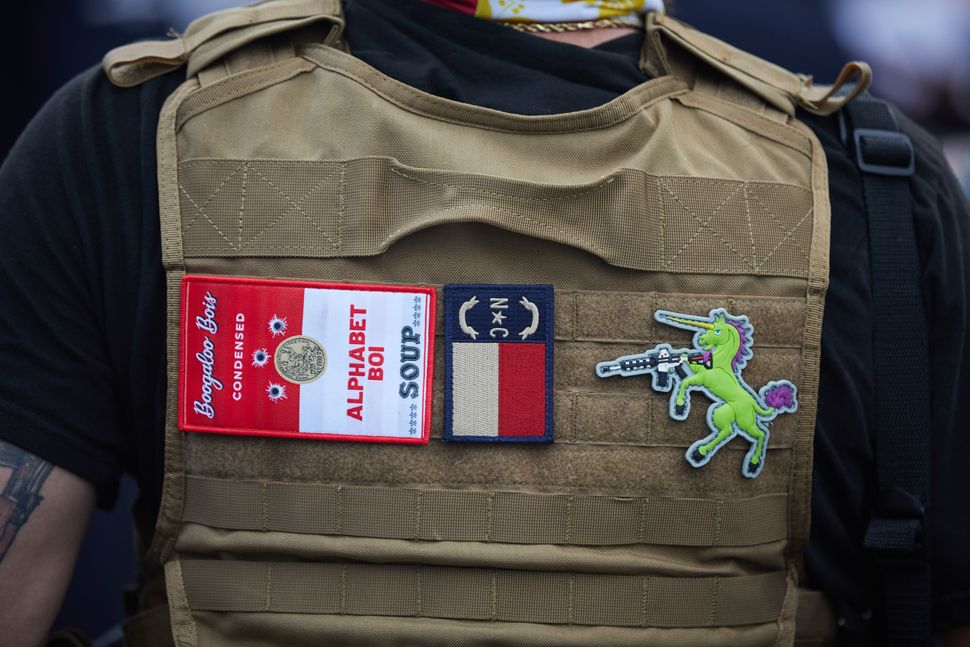 A member of the far-right militia, Boogaloo Bois, walks next to protestors demonstrating outside Charlotte Mecklenburg Police Department Metro Division 2 just outside of downtown Charlotte, North Carolina, on May 29, 2020 Image by LOGAN CYRUS/AFP via Getty Images

Researchers from Avaaz, a not-for-profit that works to combat disinformation, found more than 20 Facebook pages calling for armed violence and promoting conspiracy theories about the George Floyd protests by self-identified “Boogaloo Boys,” members of an anti-government movement. Another advocacy group, the Tech Transparency Project, found that there are at least 125 active Boogaloo groups on Facebook. Many Boogaloos have expressed white nationalist views.

This is not the first time Facebook has been accused of failing to clamp down on white nationalist content. The site purported to ban VDARE and Red Ice TV, two outlets that have promoted white nationalists, but pages devoted to their material still exist on the site.

The Boogaloo movement is difficult to define, but members generally say they are preparing for a second Civil War or a revolution that will overthrow the U.S. government, and some espouse white nationalist or anti-Semitic views. They sometimes wear Hawaiian shirts and appear at protests heavily armed. “Boogaloo Boys” or “Boogaloo Bois” occasionally attend the demonstrations in support of the George Floyd protesters, but other times they show up to incite unrest.

Facebook in May banned pages and groups using “Boogaloo” and associated terms like “Big Igloo” and “Big Luau,” and earlier this month, announced it would not recommend similar groups to Boogaloo page viewers. Still, pages with the word “boog” are still accessible on Facebook, and private groups still have the sidebar that suggests similar content.

Federal prosecutors have charged Boogaloo members in California, Texas, Nevada and Colorado with numerous attempts to commit violent crimes, including plotting to bomb a U.S. Forest Service facility, planning to detonate explosives at a demonstration and attempting to kill a security officer at a federal courthouse.

Four of the individuals charged were current or former members of the United States military.

Experts say the group is right-wing, but the Department of Homeland Security stated on Saturday that the Boogaloo movement does not have a right-wing orientation. The statement comes amid the Trump administration’s continued criticism of left-wing violence during the recent protests against police brutality.