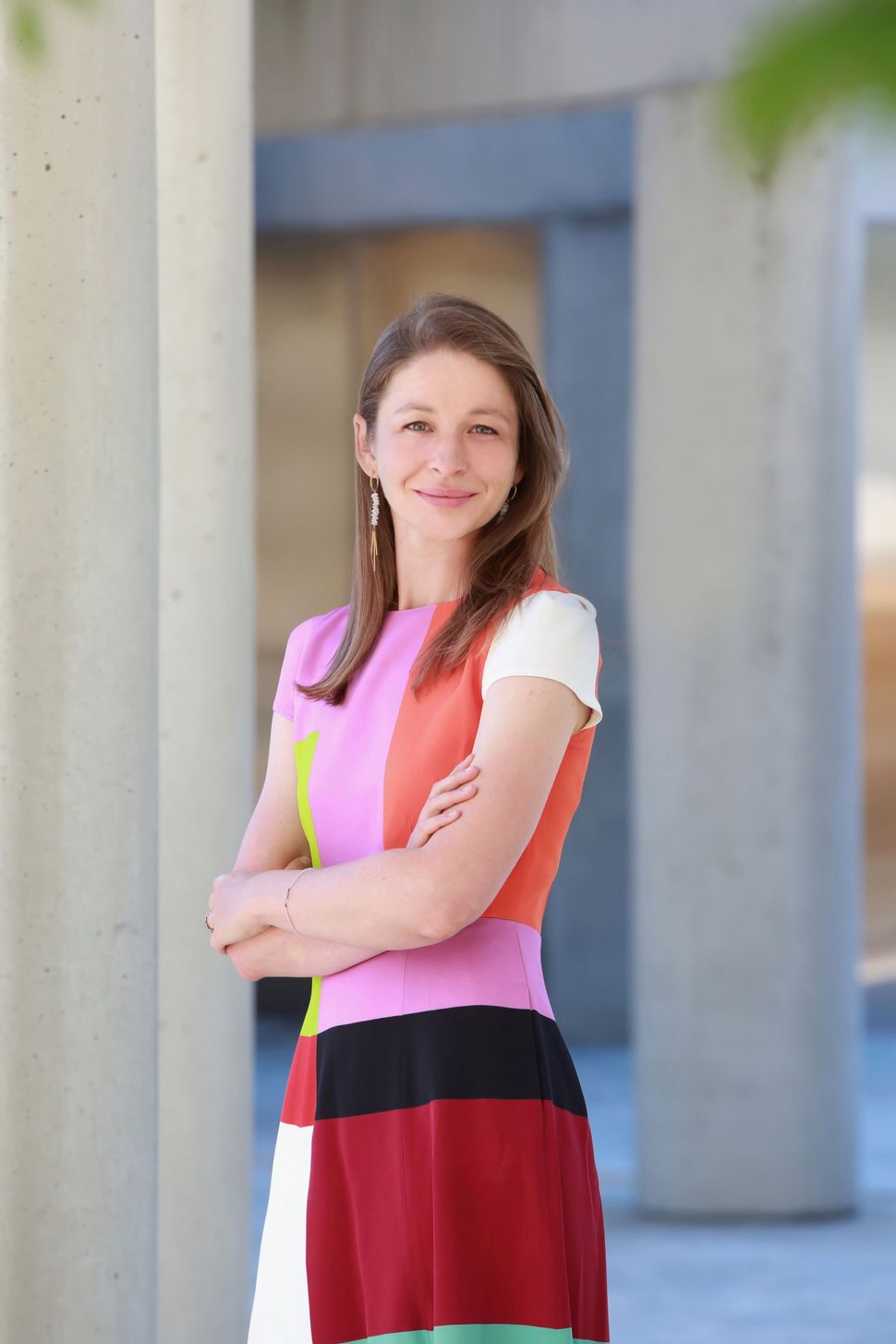 Jessie Kornberg, CEO and president of the Skirball Cultural Center in Los Angeles

In the early 2000s, Jessie Kornberg worked on homelessness and children in poverty issues in New York City. After law school at UCLA and clerking for a federal judge in Memphis, she returned to Los Angeles and founded, Ms. JD, a non-profit supporting women law students and lawyers. Later, she became a trial attorney with a boutique LA law firm, specializing in civil and white-collar crime. And for the last five years, she led Bet Tzedek, a leading poverty rights law firm, providing free legal service to tens of thousands of people a year.

So what does any of that have to do with her new job, president and chief executive officer of the Skirball Cultural Center in Los Angeles, one of the country’s largest cultural institutions built on the pillars of Jewish heritage and ideals of American democracy?

Jessie Kornberg last week succeeded Uri Herscher, a rabbi and prolific writer on issues of Jewish immigration, who retired after leading the Skirball since its conception in the early 1980s and opening to the public in 1996.

“As somebody who’s been on the front lines for a while now, I can tell you, art and culture is where a lot of inspiration and hope and vision-setting happens,” Kornberg, 38, said a few days before the handover. 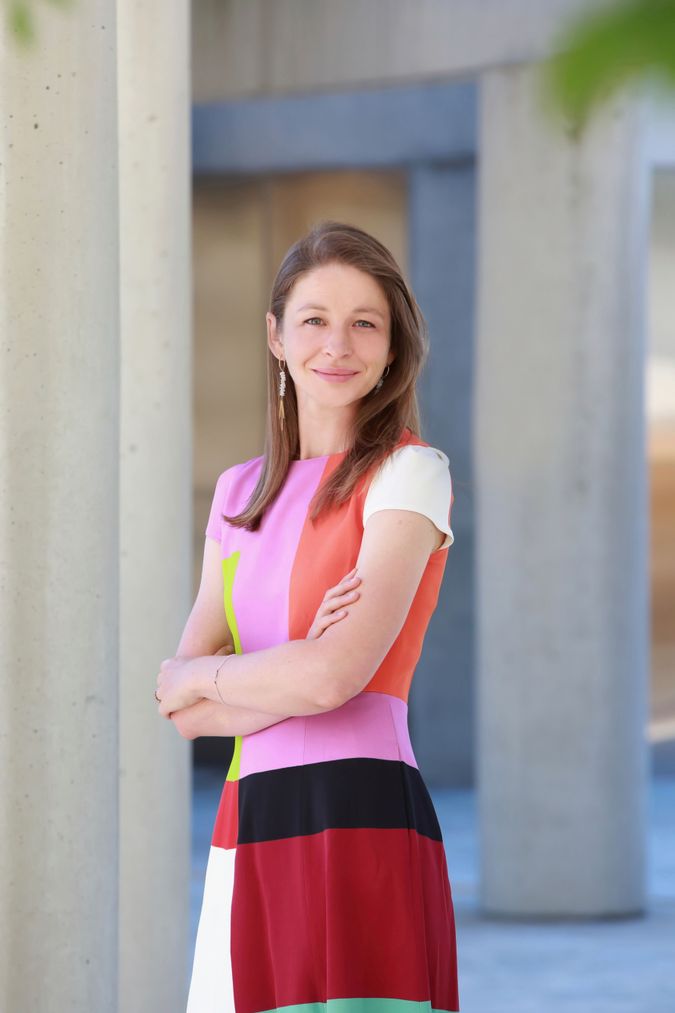 Jessie Kornberg, CEO and president of the Skirball Cultural Center in Los Angeles

The Skirball Center is one of L.A.’s premier gathering places for arts, exhibitions and cultural programs that celebrate diversity and inclusion. Its sprawling campus, designed by Israeli-born architect Moshe Safdie, covers 15 acres at the base of the Santa Monica Mountains where Mulholland Drive meets the 405 freeway, drawing more than half a million visitors in a normal year.

Like most museums across the country, the Skirball has been closed during the COVID-19 pandemic, denying visitors the opportunity to see hands-on attractions like the immersive Noah’s Ark, filled with animals made of everyday items, and a planned exhibition that traces the cultural impact of Star Trek.

But closed doors for now offer Kornberg one advantage. While the virus delays reopening, she has more time to contemplate how to amplify a prime mission of the Center, serving “the Jewish tradition of welcoming the stranger,” with programs that echo her own passions in the country’s most diverse yet segregated city at a time of toxic social divisions. One of those passions, deeply enshrined in Jewish culture, is the immigrant story.

Much of her work at Bet Tzedek was helping residents from a rainbow of demographic groups, many of them from lower income communities distant from the well-to-do environs of LA’s west side where the Skirball is located.

“One of the thing I talked about with leaders of the Skirball is the idea that the Skirball celebrates the Jewish value of ‘welcoming the stranger,’ and one of the ways that manifests on the campus is a celebration of immigrant stories and immigrant experiences and immigrant contributions to arts and culture,” she said. “I’ve been working in immigrant rights for the last five years and part of the immigrant rights community is they are poorer for having too few spaces for gathering and convening with one another.”

And so she has imagined a post-pandemic Skirball as a venue for exhibits and programs that reflect the culture and experiences of diverse groups.

Kornberg is equally determined to animate her work with racial equity, another carryover from her years as a lawyer, calling it “a core principle” and “priority number one” that long preceded the recent spate of police killings of black people, the protests that followed and a growing willingness around the country to confront systemic racism.

“This is such an important time to bring to light how inequality has shaped everything around us,” she said. “For those of us in positions of privilege, and I am in a position of incredible privilege, understanding how those structures benefit me and how my behaviors perpetuate them, how I can change those behaviors to dismantle them, could not be more important to me in everything I do, from raising my son to running an institution.”

In that sense, she said, recent events have not necessarily added new urgency to addressing these issues through programming or exhibitions. The urgency has always been there, she said; only her efforts have a new arena.

“What is so exciting about this moment,” she said, “is it will be easier to get it done and get it done well because more people around me have more awareness of how important it is.

It’s hard to imagine she’ll come up short implementing her ideas. She comes from a family of high achievers that includes two Nobel Peace Prize winners, her grandfather, Arthur Kornberg, winner for medicine in 1959, and one of his sons, her uncle, Roger Kornberg, for chemistry in 2006. Arthur Kornberg died in 2007 at the age of 89; Roger Kornberg still runs a lab at Stanford and another in Israel. Her father, Ken Kornberg, is president of an architectural firm that specializes in designing laboratories and research facilities, and her husband, Aaron Lowenstein, is a lawyer for Warner Bros.

So maybe law-to-arts won’t be such an abrupt change, at all, and certainly not to the out-going chief who brought her on board.

“My eyes are literally waning and hers are wide-awake,” Herscher said a few days before he stepped away. “I want to be the founder who cares not about the founding but about the future. Jesse has an elegant mind and a warm heart. She has character and compassion, and she knows how to communicate it passionately. This place is in really good hands.”