‘What am I going to read on Shabbos now?’ New Yorkers mourn loss of Jewish Week’s print edition 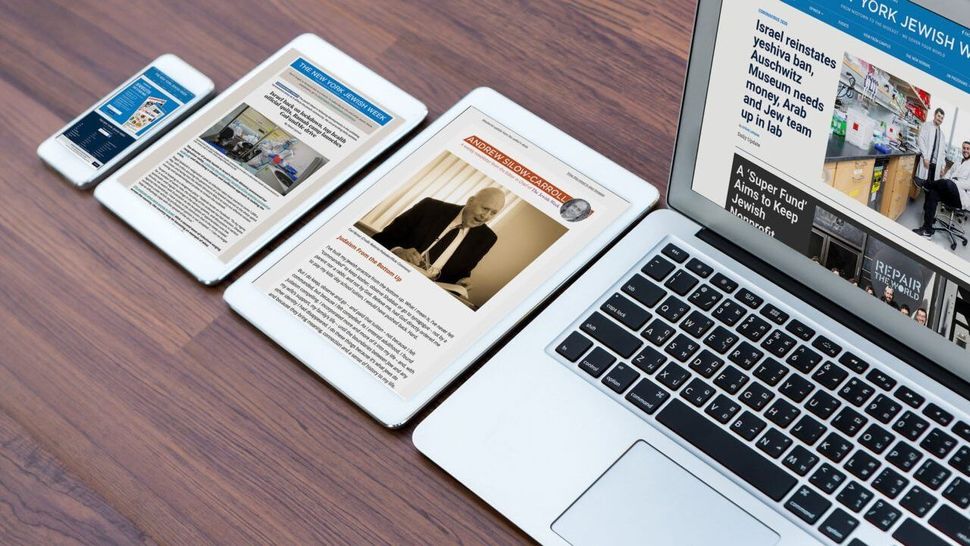 The announcement, made by the president of the board of directors, Kai Falkenberg, and Editor-in-Chief Andrew Silow-Carroll, said that the coronavirus pandemic and resulting economic crash “has hurt our bottom line and that of our advertisers.”

In an interview, Silow-Carroll declined to say how many employees would be laid off or how many would remain in the change. He said that his team would continue to publish a daily newsletter and other original content, as well as relying on existing licensing agreements with the Jewish Telegraphic Agency and the Times of Israel to broaden coverage.

“It’s a bad day for people who are going to be let go, but it’s also a good day for the future of the Jewish Week,” Silow-Carroll said in an interview.

The Jewish Week’s shift to online only follows a similar move by the Forward early in 2019 to end print publication and make significant staff cuts.

News organizations, many already in financial straits after years of disruption and change in the industry, have suffered during this pandemic, with scores of outlets announcing layoffs or closures. The Jewish press is no exception – the Canadian Jewish News folded in April, and London’s Jewish Chronicle nearly did the same until it was rescued by new ownership.

The Jewish Week’s announcement was greeted with disappointment by local Jewish leaders and by members of Jewish news organizations across the country, many of whom are alumni of the publication.

“What am I going to read on Shabbos now???” Grant Silverstein, the director of philanthropic initiatives at Touro College, wrote on Facebook.

“I got my first start in journalism at the Jewish Week and it would be awful to see it fold,” tweeted. Amy Spiro, digital editor of Jewish Insider. “Jewish news is as important now as ever.”

Jewish newspapers around the country look to the Jewish Week as a model for how to publish controversial journalism — especially its groundbreaking reporting on allegations of sexual misconduct — while maintaining the trust of the community and surviving in a tough nationwide environment for media organizations, Jonathan Sarna, a professor of American Jewish history at Brandeis University, said in an interview.

“it’s a bit like how universities look at Harvard and Yale and Princeton,” he said. “They look to the Jewish Week for setting a standard.”

But these stellar stories could not protect the Jewish Week from the negative economic trends plaguing newspapers across the nation. Print subscriptions had declined from 65,000 in 2005 to around 40,000 in 2019, publisher Rich Waloff told The New York Times last year. Like other publications, the Jewish Week tried to develop a new financial model by selling tickets to events – thousands attended a series of discussions last June featuring the cast of the Israeli TV show “Shtisel.”

But the coronavirus pandemic made those events impossible. Even the Atlantic, owned by one of the world’s richest women and seen as one of the rare media success stories in recent years, announced layoffs in May, mostly affecting its events staff.

The Jewish Week’s bottom line was also hurt by advertisers cutting back on spending, Silow-Carroll said.

“Four-fifths of our budget came from display advertisements” in the print edition, he explained. “Before COVID, but especially after COVID, the bottom fell out of so many of our core advertisers: Travel, Jewish food, hotels, events. There are no events, so no one’s advertising.”

The remaining fifth of the budget comes from subscriptions, many of which were paid for by UJA-Federation, which provided them to Federation donors who met a minimum threshold. Silow-Carroll said he was hopeful UJA would continue to financially support the Jewish Week in some capacity, and said he was brainstorming how to reward longtime subscribers.

Separately from this week’s layoffs, the publication told Poynter last month that it had had to let go two full-time and one part-time employee. Waloff also announced his retirement last month.

The newspaper tried to maintain its content output despite the diminished staff, with one of the remaining journalists writing a daily newsletter containing several brief snippets of community news. The Algemeiner reported on Tuesday that that employee had also been laid off.

Sarna, a longtime proponent of philanthropic investment in Jewish media outlets, said that ending its print edition might make economic sense in the short term, but could also cut off the Jewish Week from two core readership groups.

“One are older citizens for whom this online world is still very difficult — and just because they learned how to push one button to talk with their grandchildren doesn’t mean they’ll be able to figure out how to read a newspaper online,” he said. “The second group are the Sabbath-observant Jews who used to depend on getting the newspaper on Friday and reading it over Shabbat.”

Silow-Carroll said he shared those concerns, but added that the pandemic has meant that many people have increased their online habits, especially news consumption. He also said prioritizing an online product would help the Jewish Week reach a national audience — but stressed that it wouldn’t stray from its mission to serve local Jews.

“New York is the kind of community that deserves a strong, locally flavored publication that covers its institutions and neighborhoods,” he said.

‘What am I going to read on Shabbos now?’ New Yorkers mourn loss of Jewish Week’s print edition