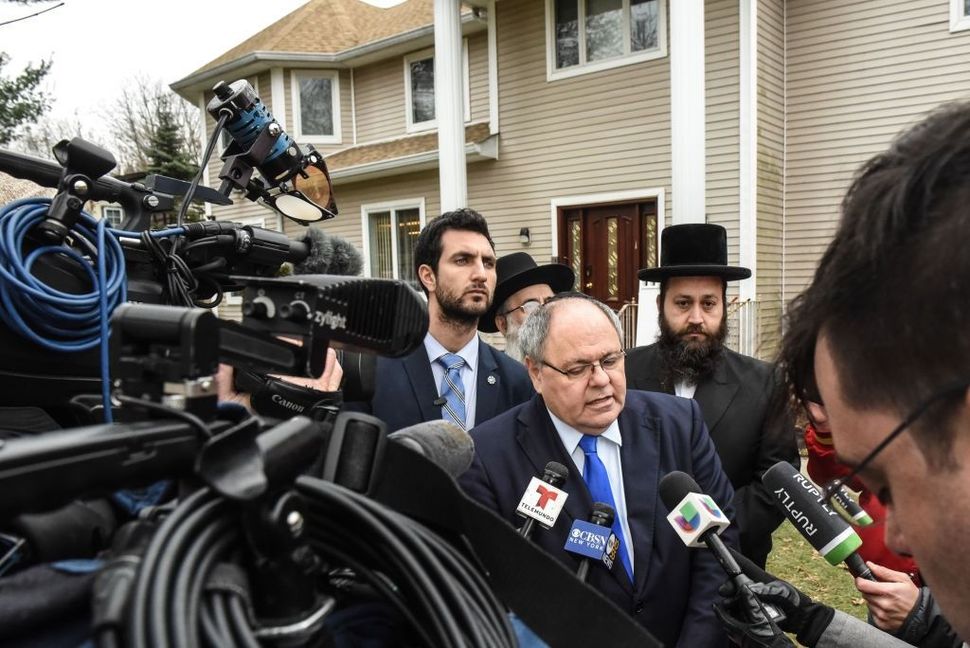 Comments poured in during Wednesday’s “exit interview” with Dani Dayan, Israel’s Consul General for New York, moderated by Jodi Rudoren and Andrew Silow-Carroll, editors-in-chief of the Forward and The Jewish Week respectively. Dayan’s term is ending during a particularly tense moment in the Israeli-American relationship, and the audience’s chat box and submissions to the Q&A section moved briskly as the panelists covered subjects such as annexation, American Jews’ relationship to Israel, and the impact of the Trump era.

Asked what was the most difficult moment during his tenure, he didn’t hesitate when he mentioned the Pittsburgh shooting, where he attended every funeral and shiva call, also mentioning the Israeli trauma team which came to Pittsburgh to attend to those in need.

Admitting that he is not a shul goer, Ambassador Dayan said he was pleasantly surprised to discover the extent to which American Jews feel connected to Israel, seeing both the Israeli and the American flag hanging in close proximity when he attended many synagogues during his four years in America. However, he said, while Americans know the issues facing Israel, they don’t understand how Israelis arrive at these decisions.

Given that annexation could put American Jews into a difficult position with regards to Israel, likely destroying the possibility of a two state solution or basic civil rights for Palestinians, Silow-Carroll asked how Dayan was planning to defend this choice to the American people. Dayan recalled the past annexations of Golda Meir and Moshe Dayan’s government, negotiating a sovereign Jerusalem and the Golan Heights, which were supported by most American Jews.

However, Dayan demurred when Rudoren asked which areas he would annex if he were prime minister; until his term as a diplomat ends on August 1, he cannot advise his government on policy, only represent it. He commented that the most important person to come to the table in the peace process should be the Palestinian Minister of Education, as the Palestinians must understand that the Jews have rights too: “The moment the Palestinians accept the Israelis, the Jews will really negotiate.”

Asked about the Boycott, Divest, Sanctions (BDS) movement, the ambassador said that he has never understood boycotting Israel, arguing that you can disagree with every single move of the government and remain a Zionist. Jewish solidarity, he said, is broken by boycotting; comparing the relationship between American and Israeli Jews to a sibling relationship, he said that boycotting your brother would break the relationship. If we Jews are a family, any move to cast someone out breaks the family bond.

Bringing up a common theme in the audience questions, Rudoren described a younger generation of unaffiliated Jewish youth, ages 20-40, who largely relate to Israel as a source of Palestinian oppression. Israel has become a divisive issue for American Jewry, particularly on college campuses, and many in the audience wondered how to reconcile between the generations. Dayan had previously assumed it was purely a college issue that would disappear as the students entered the workforce, but the recent resignation of James Bennett caused him to shift his views. “But it’s not only about Israel; it’s about many things in America, that are relevant to Americans. So it’s not so related to what Israel does or does not, but is much more related to internal American social-political currents,” he said.

He mused that, while the millennial issue was a top priority for him, he was not sure that he succeeded. Perhaps his daughter could succeed him, offered Rudoren.

Dayan, who was born in Argentina, also reflected on his Spanish fluency, saying that he picked the Latinx community as his special focus for relationship building with Israel.

Nearing the end of the discussion, both Silow-Carroll and Rudoren reiterated an earlier question about Palestinian civil rights going forward. Dayan stated that his “conscience is clean” regarding the Palestinians, saying Israel has tried to compromise and the Palestinians have rejected every offer.

On the Trump presidency, Dayan says of course Israelis care more about Trump’s stance on Israel than his politics on other issues. But the Israeli strategy is to be close to America, no matter who is president, and regardless of who is elected, Israel will continue to forge a strong relationship.

Dayan’s successor has not yet been named, but he said he hoped it would be a woman; the photos of his predecessors are hanging in his office and he sees too many male faces.

Mira Fox is an editorial fellow at the Forward. She can be reached at fox@forward.com.